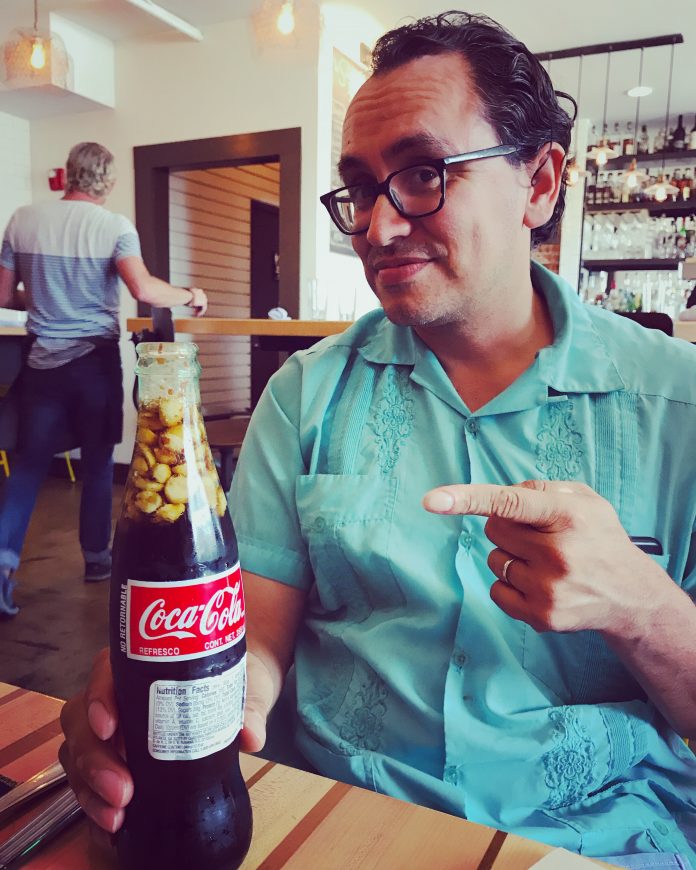 Can your drink of choice reveal something about your life? Let’s give it a — no pun intended — shot!

*0-4 years old, American beer: Budweiser, Coors, probably Miller, too. Not many Mexican beers yet at liquor stores in Southern California during the early 1980s, so my dad and many of his Mexican immigrant borracho peers overloaded on the cheap shit. He’d give me gulps of his cerveza because he was an alcoholic, but that stopped when he joined Alcoholics Anonymous.

To this day, I can barely stomach beer. The most I can do is one bottle of Negra Modela — and that’s with salt and lime. Märzens are cool, too — and that’s that.

*10-14, Wine coolers: When I’d go to family parties in Montebello and Eastlos, my older paternal cousins would invite us younger cousins to their bedrooms, where we’d play Nintendo, see — um — films, and down wine coolers. I found them weird-tasting, so never drank them much.

*14-18, Presidente: Through the 1990s, it seemed every Mexican immigrant household had a bottle of this bottom-shelf brandy. Even my parents had one — and remember, my dad is sober. Was it a status thing? Beats me. Anyways, my maternal cousins and our mutual friends slipped some shots every once in a while, just to see how it would feel. Felt funny. I found better highs with Cactus Cooler.

*18-24, Jim Beam. Finally found my muse. Got super-drunk one time with it over a girl, but I didn’t hold it against the Colonel. Instead, this was a drink of camaraderie. My friends and I didn’t go to bars or clubs. Instead, we hung out at home, played video games, and watched — um — films.

Good memories with Beam. I remember one party at my best friend Art’s house where EVERYONE was drunk on it except me (I was merely buzzed) to the point where his beagle jumped on top of the table and began to eat guacamole. Meanwhile, my cousin was so faded that we thought he was dead. We kept slapping him, but he wouldn’t wake up. Then I blasted “Even Flow” by Pearl Jam, because that was his favorite group, and he began to nod along with the thunderous opening, as his hands mimicked the chords.

My cousin credits me with saving his life that day.

*24-27, Cuba Libre: I covered rock en español during this era, especially at the late, great JC Fandango in Anacrime. I lived just down La Palma, so even if I drank one too many, I’d get home safe. But the watery sweetness of the cocktail ensured I never got plastered. And you can only have one before the Coke fills you up, so you don’t get too faded.

*27-29, Jack and Coke: Amped up the drink a bit. Always been a fan of Jack Daniel’s — and Gentleman Jack is even better. This remains my go-to cocktail at dive bars — no fuss, cheap, and impossible to mess up. And you can only have one before the Coke fills you up, so you don’t get too faded.

*29-32, Manhattan Up: 2007 was the first year my wife and I went to Kentucky, and I’ve been a bourbon guy ever since. This cocktail: strong, smooth, and eternally classy. My drink of choice at the late, great Memphis at the Santora in downtown SanTana until…

*32-40, Bartender’s Choice: Orange County is blessed with many great bartenders — shoutout to husband-and-wife team Jose and Michelle Valdovinos, Jefferson Van Billiard, Cesar Cerrudo, and others — and my wife and I frequently served as their guinea pigs for all sorts of fantastic cocktails. We became a veritable Nick and Nora Charles, we did!

*40-today, Good Ol’ Chico: But those days of drinking are mostly over. If I’m out, I usually go with a Negroni — have always had a weak spot for the strong and bitter, and gin makes me goofy. But I really don’t go out much anymore, what with my job and my wife busy with her store, Alta Baja Market in SanTana.

So my go-to cocktail nowadays is one I can only get here: the Good Ol’ Chico, named after my columna for the Southern Foodways Alliance quarterly journal, Gravy. My wife’s take on Farmer’s Coke — Mexican Coke in a Tajín-rimmed glass, spiked with peanuts and bourbon-flavored soju (she doesn’t have a full liquor license, but can legally serve soju. Cross your fingers — a full liquor license might be a’comin’…).

Perfect bellwether of my life right now: strong, sweet, Mexican, Southern. With my wife, and befitting a Kentucky colonel like myself.

And you can only have one before the Coke fills you up, so you don’t get too faded.

Can you recommend more voices like yours, or different, but that you dig? I’m always looking to get a fresh Latinx perspective about life, politics, current events, etc. In other words, can you tell me who your friends are?

My friends? They’re mostly the guys I grew up with, or people like them — people who can talk equal parts Dodgers, Howard Stern, trivia, and politics (we’re mostly rancho libertarians — a philosophy I plan to flesh out in a canto soon). Doubt you want to hang with us.

But Latino writers that I dig? Un chingo. My colleagues at the Los Angeles Times alone span the breadth of Latin America — Ruben Vives, Daniel Hernandez, Carolina A. Miranda, Cindy Carcamo, Brittny Mejia, Dorany Pineda, Dylan Hernandez, and more (subscribe to us to read them on the regular). Russell Contreras at the Associated Press and Aura Bogado at Reveal for national stories. Myriam Gurba and John Paul Brammer (queer Chicano Okie!) for essays. Beto Durán on the audio front, along with Mandalit Del Barco. Lalo Alcaraz, the ultimate cartoonista.

Many, many more. I want to plug them soon, for a project I plan to do — details to come…

IMAGE OF THE WEEK: Mexican-style Nashville hot chicken sandwich by Roland Rubalcava at his recently opened Rojo’s Hot Chicken. Chicken spiced in chile aceite (also known as salsa macha) and chile de árbol, with a nopal as a foundation to it all? AGUEVO. Open every day starting at 3 p.m. at 2235 W. Lincoln Ave., Anacrime — follow them on Instagram and GO GO GO!

LISTENING: “Across the Universe,” David Bowie. Gotta admit: I’m still learning my Thin White Duke (really, his musical genius hit me only because of Guitar Hero‘s use of “Ziggy Stardust”). But this impassioned remake of the Beatles classic is good enough to make me forget my usual aversion to Fab Four covers. A true chameleon — and that voice!

READING: “This Syrian Catholic priest was kidnapped and tortured by ISIS. He still has hope in humanity.”: America: The Jesuit Review consistently puts out great journalism (their examination of Catholic-themed movies and television shows are particularly great) like this, a meditation on the persistence of faith, and the possibility of brotherhood in the Middle East among all.

“kobe loved latinos, latinos love kobe”: My Los Angeles Times article on the relationship between the late Kobe Bryant and his Latino fans gets used to teach English to students — what a world!

“Muck Rack Daily”: I get some love on a journalism newsletter.

“Corn vs flour tortillas”: Adam Ragusea has me on his YouTube show to talk the eternal war.

“Let’s taco ’bout it: Queens professor teaches students about Mexican cuisine, culture”: The homie profe Steven Alvarez uses my book as a backdrop for an interview that a New York television station did with him about his taco literacy class at St. John’s.

“Restaurant of the Week: Just Vegana”: Southern California’s most underrated scribe David Allen reviews a Vegan-Mex spot in Pomona and cryptically references me as an “out-of-town friend” — HWUT.

“California Playbook”: Politico’s Monday-Friday newsletter about all things Golden State politics gives me two plugs this week for my Los Angeles Times work, which you can find below.

“California Latinos love ‘Tío Bernie.’ Will their votes seal his win on Super Tuesday?”: A Sacramento Bee opinion writer cites my recent story about the Bermano love for Sanders.

“A Taste of Colorado-Mex”: The upper-end, pretty smart Denver magazine 5280 shouts out my Taco USA book and my love with the Centennial State’s unique Mexican food. But I’d argue there’s no such thing as Colorado-Mex; there’s Den-Mex and Pueblo-Mex, and they’re as different as Cal-Mex and Tex-Mex!

“Family, friends, industry members pay tribute to Frieda”: Had the honor of serving as co-emcee at the celebration of life for the legendary Frieda Caplan, and The Packer covered the wonderful ceremony.

“Give Me Back My Story, Give Me Back My Power”: I get listed among a group of far-better writers of color in an essay for The Campus, the student-run publication for City College of New York.

“A new generation of young Latinos is making Coachella a must-visit stop for 2020 Democrats”: My latest front-pager for the LA Times is a dispatch from a place where Latino politicians are walking the talk on the equity game. KEY QUOTE: “Coachellanos now fill the positions of mayor, county supervisor, assembly member and congressman. A new generation is winning seats on school boards and water districts, and joining city commissions. All have the same mission: build a city with amenities and opportunities that didn’t exist when they were kids.”

Gustavo Arellano’s Weekly, Canto CXLIV: If Not You, Then Who?

Gustavo Arellano - January 16, 2021
Gentle cabrones: One of the best parts about being a reporter is the life lessons you learn along the way — not just from the people you talk to, ...