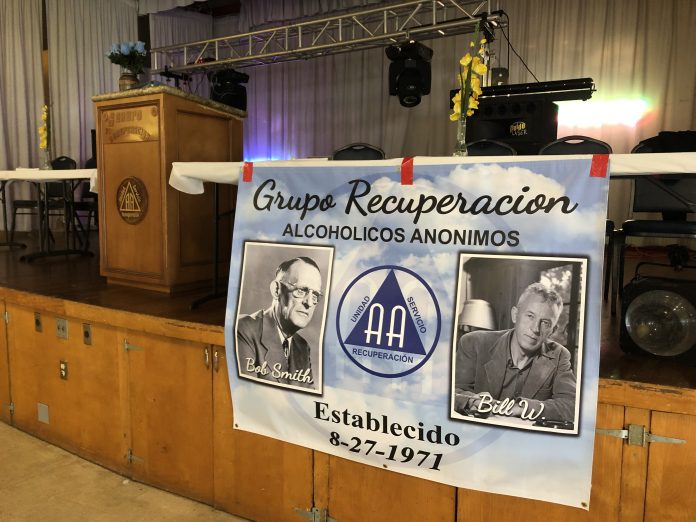 It looked like a typical quinceañera reception last Saturday when I walked into Acker Hall at Garden Grove United Methodist Church in — where else? — Garden Grove. A DJ flashed strobe lights while he spun rancheras, sonideros, and even Perez Prado for the OLD SKOOL rolas. There was a make-your-own-nachos station toward the back, and rows of tables set up family style so everyone could squeeze in — and they did.

Those in attendance dressed in their working-class Latino-immigrant best — women in dresses about eight years behind trend, men mostly in checkered shirts or nicely pressed polo shirts. On the menu: delicious birria de res, which a caterer from Jerez via East LA handed out from a cart.

It was a party, for sure – but everyone gathered not to celebrate any individual but rather their collective sobriety. They had gathered for the 41st anniversary of Anaheim’s Grupo Recuperación, Orange County’s oldest Spanish-speaking Alcoholics Anonymous group.

My dad was there to speak.

And I was there to cheer him on.

My name is Gustavo A., and I’m somewhat of an alcoholic.

The banner for Grupo Recuperación. Bill W. and Dr. Bob would’ve been proud…

I’m the only one of us four Arellano siblings who has vivid memories of my dad when he was a borracho. They’re not pretty, and I won’t go into them here — mostly because I discuss the subject at length in my 2008 book Orange County: A Personal History, which all of ustedes should buy at LibroMobile in SanTana.

My dad has now been sober for about 36 years. And I’ve had a relationship with Alcoholics Anonymous that long. I’ve written at length (not just in my book) about how he used to take me to meetings at the Alana House in Anacrime from when I was small until my pre-teens at least once a week.

Why did Papi take me? I’m not sure. Maybe it was guilt for making me drink beer as a toddler (I can’t stand the taste of most cervezas to this day). Perhaps he wanted to spend some father-son time, although that consisted of him playing pool before the meeting in a game room, while I clanged away on a pinball machine.

Or probably he did it to impart on me at an early age to not follow his path by putting me in a place where I could hear the testimonios of men and women and how booze ruined their lives — and how they were now trying to regain their dignity.

That last point did make an impact on me — but hasn’t kept me away from drink.

I am not an alcoholic, but I can easily become one. I know it’s in me. I feel how much my body likes it when I drink more than I should. That’s why I make sure to not drink the day after I’ve had a few. Why I try to tipple only socially, because I’m usually driving and that means I only limit myself to a drink lest I end up in the drunk tank. I do allow myself to get crazy every once in a while, but only with trusted friends.

I also never drink in front of my dad – I owe him that. He’s never been the perfect father, or was a perfect husband, but he has been a magnificent sobrio. He has convinced dozens, if not hundreds of people, to stop drinking, including all of his brothers and a lot of my cousins. I’ve seen him counsel people over the phone, in person.

And in 36 years, he has not returned to alcohol.

Even after my mother’s illness and death.

Because of all this, I always try to bring up AA when opportune, or try to talk to people I think drink too much. I’m a de facto sponsor to a friend, whom I talk to monthly about life. Another time, I randomly mentioned AA to a friend of a friend. She then disclosed she was new in town, a recovering alcoholic, and was tempted to relapse. I urged her not to.

The following day, she sent me an email and thanked me for the peptalk – she had found a group. Four years later, she remains sober.

Alcohol is fine, but not when it overtakes your life. That’s why I love the AA adage of un día a la vez (also the name of a GREAT Los Tigres del Norte song). Every day, we should assess our life and see that it’s as good as good can be. We need to fix the bad, and encourage the good.

I am good today, and probably always will be in the liquor department. But I’ll quickly become a compa of Bill W. if my life warrants it.

In the meanwhile, I’ll be a friend to friends of Guillermo.

The Grupo Recuperación party was great. My father and others sat on the stage in front of the DJ, like learned elders. He read the 12 Traditions, but did not offer a testimonio. One of the people who did, however, was Papis latest sponsee, a man who helped my family a lot in the wake of my mother’s passing. He called my dad “mi padrino,”  gave me a shoutout from the stage for supporting him, and said that while the road to sobriety was hard, he was happy to take it.

I had to leave the fiesta early, because work awaited. But I told my dad I was proud. I’m going to accompany him to a regional convention in a couple of weeks, and might even go to a national one in Puebla next year with him.

If you think you have a drinking problem, go to a local AA meeting. Or hit me up, and I’ll try to help.

One day at a time.

Have you interviewed children of priests? I appreciated your support for survivors of sexual abuse by priests. This is another secret they’ve kept.

I have not, alas. But as long as the sex between the priest and the mother was consensual, I see no real outrage to it except that the Catholic Church hierarchy has ALWAYS had a bigger issue with consensual heterosexual sex among its priests and nuns instead of pedophilia — true story, and telling.

IMAGE OF THE WEEK: My dad and I, at the finale for my KCRW #TortillaTournament held at LA Plaza near Olvera Street. Great time had by all — go next year, wontcha?

LISTENING: “El Caballo Canelo,” Dueto América. I’ve always loved this brother-and-sister duo for their plaintive voices, emphasis on rancheras, and interesting musical arrangements like this one about a race-winning brown horse. I THINK I have a vinyl of these, but I definitely have a CD — remember those? I still have mine!

READING: “The First Black Trans Model Had Her Face on a Box of Clairol”: This article appeared in New York in 2015, but I just found it this week. Not only is it a story about an important subject, but the writing crackles with hope, fear, disappointment — and, at the end, triumph. And great fashion spread, too! Advocacy journalism at its finest.

Sept. 19: I’ll be appearing on a “Documenting the Border” panel with reporters who cover the U.S.-Mexico border and “borders” in general at Chapman University, 1 University Drive, Orange. 4 p.m., Beckman Hall, I believe…

“Thousands Show up for ‘KCRW and Gustavo’s Great Tortilla Tournament’ in DTLA, the First Annual Food Event in the Country That Honors the Tortilla”: L.A. Taco covers my KCRW #TortillaTournament

“Chapman alumnus and journalist returns to campus for panel”: The school newspaper for my alma mater covers my upcoming appearance, and gets a hell of a nice quote from a former professor of mine.

“Looking for a great taco Tuesday? Deals overflow on Kenner’s taco row”: In which a New Orleans reporter opines I should b America’s taco poet laureate — HWUT.

“7 Ways to Check Your White Privilege While Traveling”: I make an appearance about my idea that gabas love Mexican food, but can’t stand Mexicans.

“Taco Maria wins the Golden Tortilla in KCRW & Gustavo’s Great Tortilla Tournament”: My writeup of the finale of my KCRW #TortillaTournament. KEY QUOTE: “Chef Carlos Salgado is always a talent—but when the pressure is on, he delivers like Madison Bumgarner (may I change this metaphor to Clayton Kershaw this time next year!).”

“OC Line: All Westminster city council members may be up for recall”: My latest KCRW Orange County Line tackles the eternally vicious politics in Little Saigon.