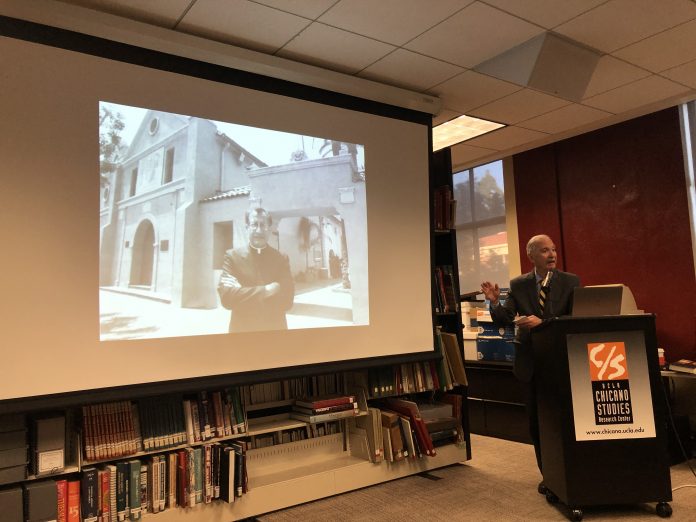 I was on deadline.

I had to prepare for an appearance on KCRW’svenerable Left, Right, and Center.

I was going to make time for Mario T. Garcia.

He is a legend in Chicano studies: the scholar who first gave credence to what he called the Mexican American Generation, the men and women whose struggle for middle-class acceptance in the United States during the 1940s and 1950 set the stage for the Chicano Movement of the 1960s that went on to degrade them as Tío Tacos.

He has done important oral histories with Bert Corona, Sal Castro, and other Chicano legends. He also edited a collection of the columns of martyred Los Angeles Times columnist Ruben Salazar.

Have you heard of Profe Mario? Doubt it.

But I have. I own all of his books. So when I found out that UCLA was going to host a Garcia lecture on his latest tome, I made sure to go and show #respect

His subject: Father Luis Olivares, a saint if ever there was one. He was the pastor at Our Lady Queen of Angels Church in Olvera Street, more popularly known as La Placita, during the 1980s. There, Olivares did something as radical then as it was today: he offered sanctuary to Central American refugees.

And he challenged everyone — but especially Mexicans — to accept them as humans.

Garcia gave the padre’s history on a Thursday afternoon, during an hour-long lecture I unfortunately had to leave early from because of work. He should’ve had students, activists, lovers of LA history, Catholics.

There’s a big conversation going on about the lack of opportunities for Latino authors in the publishing industry (follow the hashtag #DignidadLiteraria), which has spread out to lack of representation in Hollywood as well. It’s an important conversation to have, but also incomplete.

A big part of the problem is the Latino consumer.

Professor Garcia’s book is readable, vital, and about a Latino hero. His lecture should’ve been packed; his book should be at least a best seller locally.

Instead, good luck trying to find it at your local bookstore, if there’s even a local bookstore near you anymore. For better or worse, they act on consumer demand.

And Latino consumer demand for Latino subjects, despite all our protestations, ain’t there most of the time.

Books, movies, TV shows, artists: there are Latinos doing all of that. And yet most of their products fall flat, because there’s little support.

The most successful Latino author in the United States right now is Shea Serrano. Never heard of him? Then you’re obviously not a sports geek. Yet he’s had two N.Y. Times best-selling books, hilarious and insightful collections of essays on basketball and movies that address Latino issues every once in a while.

Serrano is the great Brown Hope of breaking into the mainstream, and his books are at all the big stores. Yet he doesn’t get plugged much by the Latinx gatekeepers, even though he’s a proud Chicano from San Antonio.

Complain about structural inequities, because they’re real. But if you’re not doing your part by buying books or attending lectures, watching television shows or listening to podcasts that reflect the Latino reality you want to see, then you’re part of the problem.

Rectify this. Start with buying Professor Garcia’s book. Follow up with patronizing a Latino bookstore – my preferred spot is LibroMobile. And make sure to go to the LA Times Festival of Books April 13 and 14. I’ll be moderating at least one panel, and buying a shitload of books.

Because I do my part.

Yo no lloro; hago. No excuses.

Would you ever live in Huntington Beach? I think you should some day.  Just to experience it. Heck, you’re a writer, doesn’t it make it even better when you get to experience something in the flesh?I think you would be surprised as how much you would actually like it and it would like you.

Living among white supremacists, alt-losers, and people who have no problem letting the city’s felonious ex-mayor show his face at public events? PASS. Besides, beach living doesn’t appeal to me — gimme good land upon which to grow stuff any day over salty winds. More importantly, I don’t care much for cities with pretension — and when you have to trademark a nickname for yourself (aka Surf City, USA), you’re pretentious.

But, hey, at least HB ain’t Belmont Shores, the Long Beach neighborhood that thinks it’s Newport Beach but is no better than Beaumont-by-the-Sea.

IMAGE OF THE WEEK: My mami’s Panasonic radio, which my dad recently turned on so we could remember her. Oh, the staticky comfort of KFWB-AM 980 La Mera Mera…

LISTENING: “El Querreque,” Trio Alma Hidalguense. I once played this standard of son huasteco before an entranced audience at the Southern Foodways Symposium in Oxford, Mississippi, to show that Mexicans can get down on the fiddles and falsettos as well as any ‘billy. Fabulous song in an unappreciated Mexican genre.

READING:“Black History in Hawaii: from whaling ships to royal courts”: AWESOME local history for African American month by an unlikely (for haoles) source. If only more local television stations commissioned deep dives like this…

Oxy ArtsResidence: Excited to announce I’m a Scholar in Residence at the Institute for the Study of Los Angeles at Occidental College in L.A.! As part of my responsibilities, I’m doing what I’m calling community office hours: every Tuesday at Oxy Arts in Highland Park from noon to 3 p.m. for this semester, I’ll be talking to people on a one-on-one basis about whatever they want! Address is 4757 York Blvd., Los Angeles, and is on a first-come, first-serve basis unless you RSVP, which you can by emailing me — DO IT DO IT DO IT!

“Essential California: On an ugly anniversary, an apology”: My colleague Julia Wick plugs my story about the California Assembly’s apology to Japanese Americans for our state’s ugly treatment of them, a story you can read below.

“L.A. Times spotlights move to protect ‘Noah’s Ark of citrus’”: UC Riverside’s PR team highlights my story on the school’s legendary Citrus Variety Collection, a story you can read below.

“16 Amazing Things To Do In Southern California This Week: Feb. 18-20”: LAist highlights my appearance on Left, Right & Center, an appearance you can listen to below.

“Michael Herrera, La Fiesta’s Founder, Left Quite a Legacy”: Denver’s Westword cites my love of La Fiesta, a Den-Mex legend (wonton-wrapped chile rellenos), in an obituary about its founder.

“Finally, a real debate”: My appearance on KCRW’s Left, Right & Center — I got both the loudest applause (for my dig at Pedro Buttiegig) and softest (for my citation of California’s mistreatment of Japanese Americans).

“California to apologize officially for historical mistreatment of Japanese Americans”: In which I report on a California Assembly resolution that takes the Golden State to task on its relationship with Issei, Nissei, and Sansei beyond incarceration. KEY QUOTE: “HR 77, introduced by Assemblyman Al Muratsuchi (D-Torrance) and co-authored with six others, spells out in excruciating detail California’s anti-Japanese heritage.”

“In the Noah’s Ark of citrus, caretakers try to stave off a fruit apocalypse”: An LA Times front-pager on one of my favorite places in Southern California — UC Riverside’s Givaudan Citrus Variety Collection — and the existential threat it faces in citrus greening. KEY QUOTE: “But the ultimate problem such a scenario would present is more symbolic: If the Givaudan Citrus Variety Collection isn’t safe from citrus greening, then no backyard tree or commercial orchard is.”

“Latino voters seem fond of ‘Tío Bernie.’ Big-name Latino politicians, not so much”: Another LA Times piece, this one on the incongruity of prominent Latino politicians endorsing basically anyone but Bernie Sanders even though he’s leading among Latinos in nationwide polling. KEY QUOTE: “They’re like our tías, who are, like, ‘Ese viejito, que es no tanto’ [That old man, he ain’t much],” she said. “But they learn once you talk to them about Bernie. They’re not dumb.””

Canto XCVIII: Latino Consumer, Heal ThyselfYou made it this far down? Gracias! Follow me on Twitter, Facebook, and Instagram while you’re down here. Buy me a Paypal taco here. Venmo: @gustavo-arellano-oc. And don’t forget to forward this newsletter to your compadres y comadres!