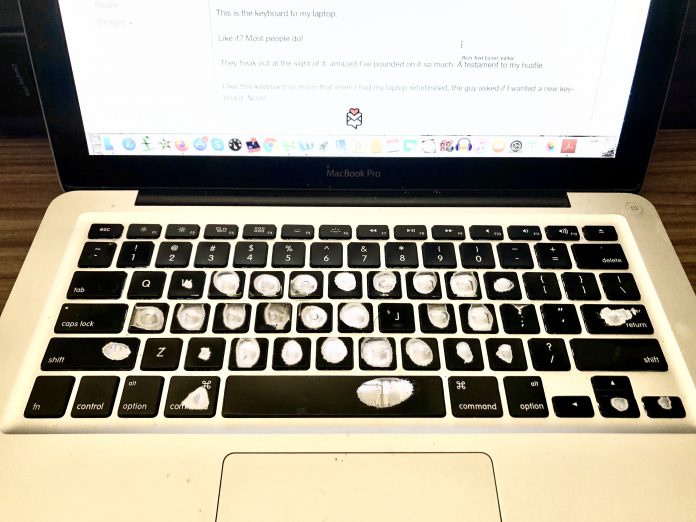 The photo below shows the keyboard to my laptop.

They freak out at the sight of it, amazed I’ve pounded on it so much. A testament to my hustle, I respond.

I like this keyboard so much that when I had my laptop refurbished, the guy asked if I wanted a new keyboard. Nope!

Recently, however, someone who saw it for the first time offered a fascinating psychological insight.

She noticed the keys in the lower right part, the up-down-left-right ones. “Look at that forward button!” she exclaimed. “That’s you! You don’t even touch the back button!”

As that GIF of a smiling, nodding kitten from The Aristocrats put it, “You’re goddamn right.”

This marks the 100th canto I’ve sent out – wow! I think I’ve actually sent out a couple more, because I know I repeated some Roman numerals some weeks, and maybe skipped some another.

I started this newsletter for two reasons: to defy the algorithm gods and get the stories that I wrote to people who want to read them.

And because I was looking forward, at a time in my life when there was no use in looking back, knowing that as José José once memorably sang, lo pasado pasado.

The past is the past.

I was reminded of this unceremoniously this week when I found out that the owner of OC Weekly has reduced the archives of the paper I worked at nearly my entire career to just whatever came out in print from 2018 through its closure Thanksgiving week of last year.

17 years of articles of mine—disappeared. Not to mention those of my colleagues.

An entire era of Orange County history, stricken from the web because Duncan McIntosh is a cheapskate dunderhead.

(Please don’t tell me about Wayback Machine – that’s not the point here. And you don’t think an archivist nerd like me doesn’t know about it? GTFO).

All this week, I’ve received dozens of emails from frantic readers, scholars, or fans wanting to know how to access this article or that article. I obviously can’t help, because I haven’t been at the paper for over two years.

I ache for my former colleagues – again, laid off the week of Thanksgiving with no severance by a callous, cruel fool — who remain unemployed and can no longer easily access the digital clippings they need to get some work. I’m furious over the loss of institutional knowledge to the rest of the world.

But on a personal level, I don’t care. Because OC Weekly is immortal.

And besides…well, I can’t say.

Other than if you ain’t looking ahead, you’re going to get caught from behind.

And I ain’t never been caught.

I am researching my dad’s family tree in Acaponeta, Nayarit. The cathedral was built in 1781 or so and the records stop cold there. I can’t find out what church has the baptismal records before Acaponeta for that area so I’m at what genealogists call a brick wall. Do you know how I would find out where the records were kept before the Acaponeta cathedral was built? My goal is to figure out where in Spain the Azpilcueta/Aspericueta/Espericueta line came from and go visit.

Funny — I Googled your family’s unique surname, and I found your inquiry as the first result! So there goes my suggestion to try Ancestry.com haha. But I’d brush up on my Mexican Catholic history. Nayarit wasn’t even a state until it was split off from Jalisco in 1917, so I’m assuming any churches in the region reported to the Archdiocese of Guadalajara, which remains the metropolitan see to the Diocese of Tepic.

If you have adult names, you should be able to find the trail in the capital of fresas. Suerte!

IMAGE OF THE WEEK: Self-explanatory, ¿que no? Always like to put it on my shoes, because we gotta boot the babosos out — and whether it’s Democrats or Republicans in charge, there’s ALWAYS going to be babosos because politics.

LISTENING: “Granada,” Javier Solís. I was…somewhere…for an upcoming food story for the Los Angeles Times, and the restaurant was blasting a CD of Solís. They didn’t play this song, off one of the most unappreciated albums in ranchera history: Fantasia Española de Agustín Lara con Javier Solís. Mexico’s second-greatest songwriter and Mexico’s greatest singer, together to spin a Spanish fantasy? Yes, please. PS, Sinatra’s version actually ain’t bad.

READING: “The Long, Knotty, World-Spanning Story of String”: Hakai is a great Canadian magazine about all things coast, and this wonderful feature on the history of string and its important to EVERYTHING is great — delightful read, heavy when it needs to be, and ultimately in awe of its subject.

“How To Cure Your Taco Cravings At One Single Festival In San Antonio”: I’m supposed to be at this taco festival in SanAnto in April — let’s hope it still happens in the face of this coronavirus bullshit.

“Netflix’s ‘Gentefied’ Is the Revolution Taco Tuesday Needs”: The homegirl Serena Maria Daniels of Tostada Magazine hits me up for a quote for her excellent Thrillist piece.

“Searching For The Perfect Fish Taco”: Forbes quotes me about the subject at hand.

“Tucson times, and a farewell”: High Country News mentions a panel held by them at the Autry Center where they graciously allowed me to ramble.

“Latino wave put Bernie Sanders on top in California”: My latest Los Angeles Times stories notes how the Sanders campaign plugged into longtime community activists across Cali for its Super Tuesday victory. KEY QUOTE: “For them, a nonstop push for Sanders was just like any other day in their activist life. They were there in Sanders’ Santa Ana office, and they weren’t tired.”

“Will Republicans take back Orange County on Super Tuesday?”: The headline to my latest KCRW“Orange County Line” is a bit misleading — the commentary is actually about the two Board of Supervisor races that went on. But would you listen to that before listening to the story published in the headline? Fuck the algorithm gods.

Gustavo Arellano’s Weekly, Canto CXLIV: If Not You, Then Who?

Gustavo Arellano - January 16, 2021
Gentle cabrones: One of the best parts about being a reporter is the life lessons you learn along the way — not just from the people you talk to, ...