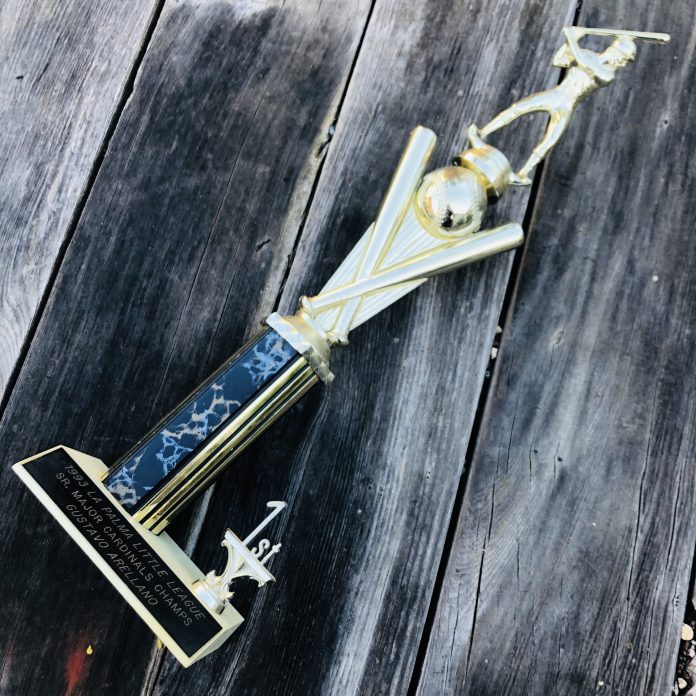 The clearing of my late mami’s garage is ongoing. But the first artifact that moved me to something approaching nostalgia, a sentiment I despise, was actually in our living room all along.

My mother set up a shrine devoted to us children in a bookcase: photos of us and her sole nieto. My three books. An unabridged version of the Real Academia Española dictionary that my sister used back in the days when she was studying Spanish.

And on the very top, my 1993 Little League Senior Majors trophy.

It must’ve been there for years, but I never noticed it until my dad gave it to me, asking if I wanted it.

Of course I did.

Because it brought back a bunch of humiliating memories that I continue to treasure.

At least they spelled my name right…

I told most of my Little League tales in my forgotten 2008 book, Orange County: A Persona History (buy your copy through LibroMobile in SanTana; there are two copies in stock right now), so I’m not going to retell them here, as hilarious as they are.

Except for two anecdotes I didn’t share in my book, because they were especially embarrassing. Two formative fuckups.

The first one happened when when I tried out for La Palma Little League Senior Majors. There were two teams: the Angels, and the Cardinals. The Angels were the marquee squad, the Redbirds, a collection of rejects. It was my dream to play for the Angels, but I knew I stood no chance — until, by some bizarre scenario I can’t remember anymore, I got to try out for them.

They had one last draft pick, and the choice was me and someone who they had never seen, and didn’t even know their name, the Angels coaches would later on tell their players. “But no way in hell,” they continued “were we going to pick him.”

Their rejection wasn’t surprising. What pissed me off, however, was that the coaches — adult men — used my lack of talents as the butt of a joke.

I didn’t cry. My life has been built on responding to rejection (even to this day, actually). And I would have the final word, I vowed, by being the best damn ballplayer in the La Palma Little League Senior Major division.

That season, I didn’t get a hit.

But, amazingly, the La Palma Cardinals became winners. Our ragtag group of wannabe cholos, big-boned pitchers, evangelicals, a token gabacho with an overbearing sports dad, and this loudmouthed nerd battled the heavily favored Angels for the league title all season.

In our first matchup, we even held the lead through the bottom of the seventh (when games end in youth baseball), when a ball was hit to right field, where coaches always position the weakest player.

Where I was positioned.

Where I committed the error that cost us the game.

All my teammates were furious at me, and left me alone on the bench, where I wept in shame. But one of the parents told the team to not leave me alone, so our team captain — one of the wannabe cholos, who’s now an Anaheim police officer — went up to me and said that it wasn’t the error that upset him, but rather that I gave up and didn’t go after the ball.

His lesson has stayed with me over 25 years later. And also what happened the next time we faced off against the Angels, for the league championship.

Because I hit a groundball that bounced off the glove of the Angels third baseman.

And I didn’t give up.

I don’t take the triumph, both team and personal, as the ultimate lesson, but rather the adversity I endured.

Not even adversity, but outright humiliation.

I was a terrible baseball player, which hurt because I loved the sport so much and all my cousins were amazing. Adults mocked how bad I was; my teammates had to tolerate my lack of skills.

All this, while I was going through the horrors of eighth grade.

But I didn’t shy away from the pain, then or now.

We all need to get embarrassed by our lack of skills at some point in our lives. Because what follows makes or break those who can or can’t — and I, for one, always wanted to be a MexiCAN.

So, yeah, I’m keeping that 1st-place Cardinals trophy. It’s a reminder of an unpleasant time in my life that helped to position me where I am today, living the life I always wanted.

But, yeah, I’m not joining no Los Angeles Times or KCRW softball team. I can be the off-color commentator, though!

I’ve been posting on my IG page for a couple years now, (I’ve tagged you in a few of my posts before) and I just wanted to say that people like you, Anthony Bourdain, and Jonathan Gold are the reasons why I got into starting a page like this in the first place. I read “Orange County” in my American Studies class at CSUF and since then, I’ve been trying to play catch-up with the options that the area has to offer. What started as a side gig while working three jobs is slowly working its way into something I potentially see myself doing full-time. However, it’s hard on IG with an audience that seems more concerned with excess than quality. Do you have any suggestions on how to make a name for myself out here with this? Any advice would be appreciated!

Primeramente, gracias for the kind words. Make sure to read my previous cantos on advice to freelancers, about always give it your best because you never know who’s watching, about how you shouldn’t get beat, and last week’s writeup on articles in the wind. I would also urge you to tell people a story, instead of just offering pretty pictures. You can’t compete with amoral influencers, nor should you want to, so focus on what they’re not capable of: depth.

Everyone: Give the guy who asked this question a follow, wontcha? He’s on IG @seaneatsanddrinks— good photos, not-bad finds, and he knows TK Burger is better than In-n-Out, so YOU KNOW he’s smart! 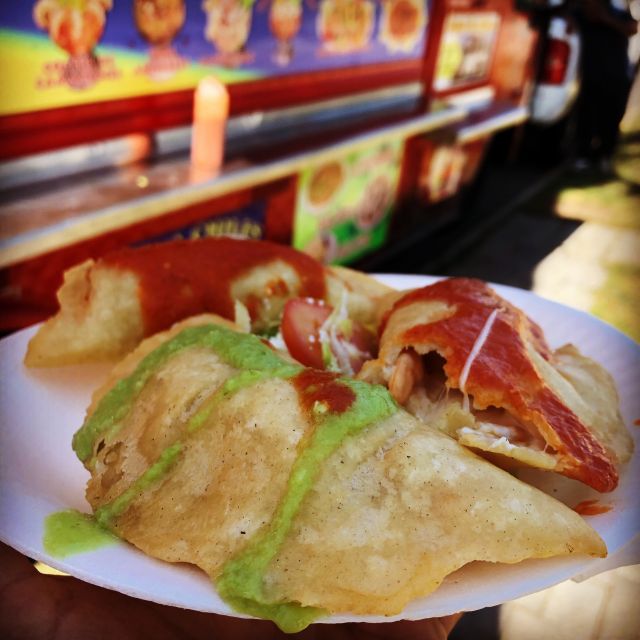 IMAGE OF THE WEEK: Nayarit-style empanadas de camarón at the Mariscos San Pedro truck in SanTana, which parks during the day behind the Pep Boys off of First and Main. Follow my Instagram account for more regular food photos, porfas!

LISTENING: “El Cuatro,” Mariachi Vargas de Tecalitlán. I’ve heard this song most of my life, but finally listened to it — wow! You need to have a VOICE to pull this one off, and there’s a lot of tonal shifts that keeps the son lively and grand. And the line “Querido de las mujeres/Apreciado de los hombres (Beloved of women/appreciated of men)” just might be the most #respect line in the mariachi canon — and that’s saying something…

READING: “The Unicorn Tapestries (1495–1505).” I love the Public Domain Review for its antiquarian deep-dives into film, manuscripts, music and more. This article, which talks about that chained, penned unicorn image you’ve seen at some point but probably didn’t know it’s the conclusion to a sequence, gets into its entire history while also delving into medieval symbology and technique and describes the sad pursuit of a magnificent animal — you haven’t cared so much about a tapestry since Bayeux.

“LA Times Critic Delights in the Nigerian Flavors of a Mid-City Newcomer”: I didn’t review the Nigerian spot — that was my colleague, Bill Addison. But I do get a mention in Eater LA’s weekly roundup of L.A. restaurant reviews for my take on Pikoh, which you can read below…

“Burning Question: Can you pair wine with Doritos?”: A writer for Monterey County Weekly wildly misrepresents my Taco USA book in calling my history of Doritos “contrived.” You know what’s “contrived”: Using Google Books to do your research on someone’s book instead of reading the whole pinche thing.

“John Tanton, quiet architect of America’s modern-day anti-immigrant movement, dies at 85”: Forgot to share my Los Angeles Times obituary last week about this wildly influential eye doctor. KEY QUOTE: “For the rest of his life, Tanton eschewed any attempt to curry mainstream respect in favor of interacting with white nationalists and other far-right extremists, to the point that even former friends denounced him.”

“At Pikoh, Peruvian superstar chef Ricardo Zarate holds back his fastball for a West L.A. crowd”: My latest food review takes on a good restaurant that frustrates me because it can be better. KEY QUOTE: “But Zarate kneecaps Pikoh throughout his dishes: They whisper Peru when they should scream it.”

“OC Line: Will Seal Beach be underwater by 2100?”: My latest KCRW commentary on Orange County.