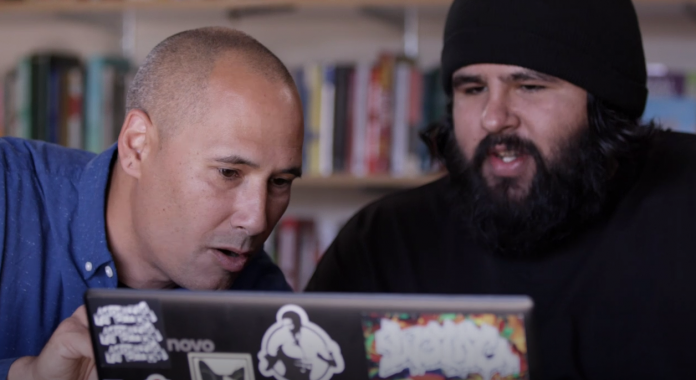 A couple of months ago, my former reporter Frank John Tristan—who, as an INTERN, faced off against neo-Nazis losers in (where else?) Huntington Beach, and not only survived but got to see three of them arrested this week by the feds—emailed me a document.

It was notes he took from when I would sit down with the interns at OC Weekly every week and pontificate for an hour on a given subject.

Of the many things I took pride during my time at the infernal rag, I was especially boastful of our intern program. Yeah, we didn’t pay them—hell, we barely paid our freelancers. But my selling point to interested students was that you learned more under us in three months than you could possible get in four years of J-school and a pinche graduate degree.

Don’t believe me? Interns who worked under me are currently at The Atlantic, New York Times, KPCC, NBC News, Los Angeles Times (at least three of them) and more places that I can’t remember right now,  I don’t claim to be the wizard behind their success; I give all credit to the lessons I learned from my mentors that I’ve passed along to lucky people ever since.

And the top lesson? The one I also repeat to my Intro to Journalism students at Orange Coast College. 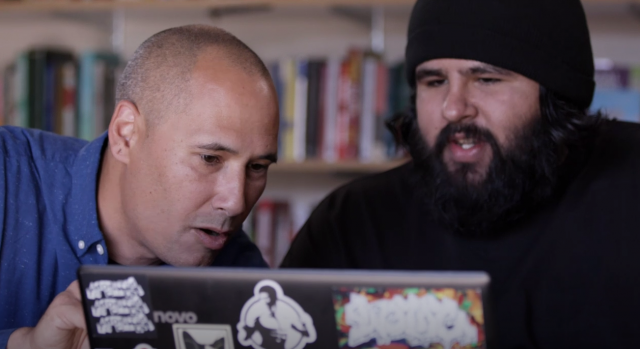 Frank (at right) teaching ProPublica reporter legend A.C. Thompson about white-power losers in OC. Screenshot from Frontline documentary—was your work been highlighted on Frontline when you were 22?

“Don’t get beat” is specifically about one thing and one thing only: be the first person to do a story. Losing is inevitable in life—the only person who ever retired undefeated was Rocky Marciano, after all.

(And Floyd Mayweather, Jr. And Joe Calzaghe. Andre Ward. Among others. But bear with me!)

But you could always be the first to get a story. No excuse if you’re not the one.

I thought about this recently when a friend told me they were sitting on important information. The person wasn’t a journalist, but I told them what I would tell Frank and others: Don’t get beat.

Don’t let others take what’s rightfully yours, what’s there waiting for you. Don’t let time pass you by. Don’t relax when opportunities are within your grasp.

“Don’t get beat” isn’t the same as carpe diem. I always found that phrase lightweight, juvenile—specious and trite.

“Don’t get beat” is far better. It suggest reality—that you must always be on the watch. That there are people trying to get ahead of you. That you should always be prepared to pounce.

But if you did get beat? Be disgusted with yourself for a bit, I’d tell Frank and others. But don’t dwell on your failure. Pick yourself up, and come back to dominate better than anyone.

I’d always share an example of when I got beat. In 2004, I did a story on a SanTana veteran of the Iraq War. I got beat on the story–badly. His tale had been told by the New Yorker, Washington Post, CNN and—BARF—the Orange County Register.

The latter was such an egregious case of getting beat that my editor at the time dressed me down during our editorial meeting to the point of humiliation. To the point where my colleagues—some of whom didn’t particularly like me, for reasons known only to them—told me they felt bad for me.

I was beat. But I wasn’t going to get beat.

And I didn’t: I wrote the story. I got nominated for a PEN Center USA award—one of the biggest prizes in American literature. At the age of 25.

(Imagine how far I could’ve gone in my career if I had just concentrated on writing? I don’t imagine—I’ve loved my career. But sometimes I wonder…but I digress).

There are many, MANY lessons I have in the notes that Frank took (here’s a random one: “No fear; Moxley decided long ago he wasn’t going to be a reporter who lived in fear. Fuck a ranker”—HA!). A lot of them are great, and can be applied to life.

But I’m not going to share them with anyone, unless they sign up for my classes or apprentice under me. Fuck this Wikipedia open-source bullshit. I adhere to gnosticism, to the idea of learning from masters instead of the mobs.

Besides, I shared with ustedes the ultimate lesson:

BTW, anyone need a good, young reporter? Hire Frank. He just turned 23, and already appeared on Frontline for exposing alt-losers. Kid’s already really good, can become GREAT—can someone please tell him that?

Because he doesn’t listen to his maestro anymore haha

READING: “It Started as an Online Gaming Prank. Then It Turned Deadly”: Everything wrong with gaming, Internet, and police culture told in heartbreaking detail by WIRED, a magazine that used to be better but can still wow ya.

OCT. 29: GUSTAVO TAKES ON THE HATERS

I’ll be on a panel with legendary investigative reporter A.C. Thompson at my alma mater, Chapman University, as we screen A.C.’s chilling Frontline special, Documenting Hate: Charlottesville, in which I appear. Screening starts at 7 p.m. and will be FREE. Don’t have a room number just yet, so hit me up the week before and I’ll tell you.

I’ll be talking Mexican food at the Museum of Ventura County, which has always been very generous to me over the years and is very underrated in terms of the thought-provoking programs that they always offer. My talk will be part of their current exhibit At Table: The Business of Food and Community. I don’t even have a time for this one yet, but know it’ll be in the evening and will cost the tiniest bit to attend—but who cares? Support your local institution, pinche codos!

“Gustavo Arellano: Could Longtime GOP Stronghold Orange County Go Blue in Midterms?”: I appear on Democracy Now to talk the TRUTH about the blue wave that’s supposed to hit OC.

“Tostada Road Trip: Why Orange County is one of the best places to eat in America”: My comadre Serena Maria Daniels gives me and my wife’s store a shoutout in her dispatch from OC.

“‘Interview With a Mexican’ a carnival of conversations”: The Albuquerque Journal gives a plug to my play.

None that have appeared since my half-newsletter on Wednesday—but A LOT are in the pipeline. Details to come…