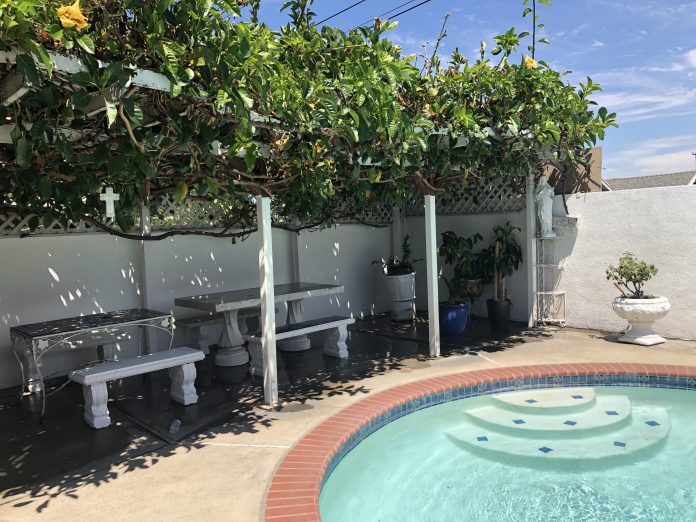 It’s peak summer right now, which means everyone’s on vacation, judging by the out-of-office replies I got last time I sent out a canto. Hell, I’m guilty of this too – I didn’t send out a canto last week, and I’m a day late sending out this one ha ha.

Last week, I was in Chattanooga with my wife and friends on our annual trip to the South. Had a great time—really cool city! Will write about it some day…but not today.

Instead, I’ll keep in line with the vacation theme and write about the the perpetual summer that is our family swimming pool.

It’s part of our American dream and something that brings me happiness just thinking about it — a reflection of my parents’ hard work, and many pleasant memories.

And something I haven’t swam in in about 15 years. 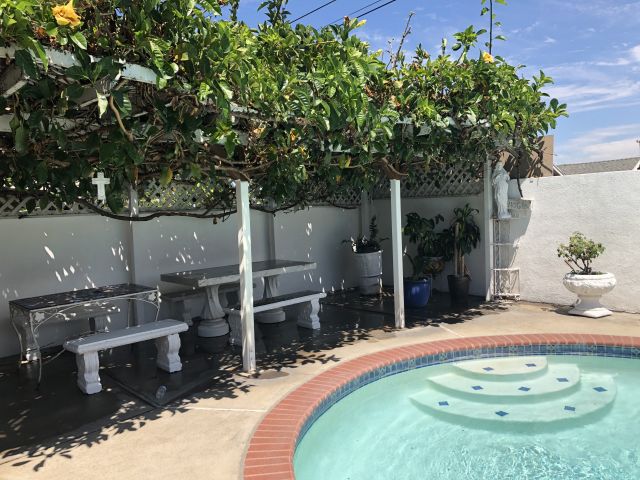 The gazebo part of it. Not pictured: My dad’s dog, Canelo, who likes to sit on top of the marble table haha
First time reading this newsletter? Subscribe here for more merriment! Buy me a Paypal taco here. Venmo: @gustavo-arellano-oc Feedback, thoughts, commentary, rants? Send them to mexicanwithglasses@gmail.comWhen my parents bought their home in 1988, the pool was one of the major selling point. My dad loves to swim, and he taught my sister and I at the Pearson Park pool in Anaheim (which used to be segregated) when we were kids. He then trained an entire generation of cousins at our home.

The highlight of every summer was when we’d invite over the Arellano side of the family. My tíos y tías would come from La Puente and Montebello and East LA and the San Fernando Valley and beyond (yes, Cerritos!) We were the only family with a pool, so my cousins would revel in the cool waters and carne asada my uncles and dad would grill and not want to leave until sunset, damn the long trip back home.

Only one person had a bad time at these family-friendly pachangas: me.

Oh, I loved to hang with my cousins and to swim. But who had to clean the pool before and after? Me. My dad would make me scrub the sides in the morning and put chlorine and wash the filters, and you know what? Having a pool isn’t all cannonballs and Marco Polo.

By the time I got to college, I rarely swam in our alberca because I resented it. My younger brother’s generation of cousins (we were born 12 years apart) still kept coming over, but I would lock myself in my room writing and reading; when I’d finally emerge to say hola, everyone greeted me like if I was the prodigal primo, which in a way I’ve always been.

The parties lessened over the years. My siblings became adults; my cousins started their own families. The backyard became cluttered.

And with my mom’s cancer, no one was in the mood to splash around anymore.

One of the first things my dad committed himself to do in the wake of my mom‘s passing was to clean up the backyard and get the pool ready for visitas. He now wants to teach my cousin’s children’s, wants to bring back the cheer of years past.

So we hauled away a bunch of stuff and there’s been a couple of parties since. I’ve only been to one — I’m still the nerd that sits sits inside and reads and writes.

But it makes me happy to be able to be there. To see some much-needed joy return to my parent’s house.

It’s funny how you miss things that you always took for granted once they’re not there. Or, I guess it’s not funny; it’s life.

Who knows? Maybe I’ll jump back into the pool. It’s been a while…

Journalists really do party (and work) harder than others, yes?

Work, absolutely. News never sleeps, and when it happens, you have to cover it. My Los Angeles Times colleague Rong-Gong Lin II covered the July 4 and 5 earthquakes in Southern California while on vacation half a world away. He technically didn’t have to, but he did it — because news never sleeps.

As for partying? There’s a hashtag out there that says #partylikeajournalist. But reporters are basically goody two-shoes now. As journalism has professionalized, so has the ranks — not many sousers anymore. Gotta keep those ever-disappearing jobs, you know?

Enough rambling. This was the semana(s) that was: 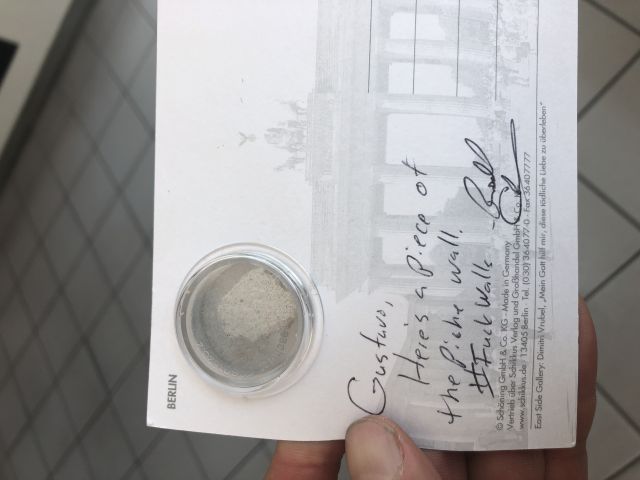 IMAGE OF THE WEEK: Piece of the Berlin Wall mailed to me by my compa, Associated Press reporter Russell Contreras. Walls fall — that is alls…

LISTENING: “I Found Someone of My Own,” The Free Movement. I first heard this song on the late, great KRLA-AM 1110 and immediate loved it: the vocals, the early 1970s souls, the cool indifference of the protagonist (who was also cheating!), the vivid descriptions in the lyrics. This version isn’t on Spotify, btw, which shows again why you shouldn’t rely on digital overlords to give you the world.

READING: “People Are Calling For This Queer Indie Film To Be Canceled Before It Hits Theaters”: I’ve been on the receiving end of cancel culture — really fun, and maybe I’ll write about it one day! This Buzzfeed story thoughtfully examines the phenomenon and bravely makes the case that maybe the people who wage cancel campaigns might possibly be wrong.

AUGUST 31: “Canto de Anaheim”: I’ll be the host for a radical production: Members of the Pacific Symphony will tackle the history of Mexican Anaheim through a play scored by classical music! 7 p.m. in the beautiful Pearson Park Ampitheater, 401 N. Lemon St., Anaheim. Event is FREE — GO GO GO!!!

SEPTEMBER 8: The second edition of my KCRW Great #TortillaTournament — where I match up 64 tortillas, 32 corn and 32 flour, against each other in a bracketed playoff — is BACK. I have some articles further down the canto that’ll explain, but know in this part that grand finale — tortilla tastings, music, tortilla art, food vendors and more — will be Sept. 8 from 3 p.m.- 7 p.m. at LA Plaza de Cultura y Artes, 501 N. Main St, Los Angeles, (213) 542-6259. The event is FREE, but you gotta RSVP to attend. DO IT DO IT DO IT!

“After shooting and ICE raids, El Paso-born Angeleno fears for his family’s safety”: My KCRW OC Line this week focused more on El Paso’c connection to LA, which was the subject of one of my LA Times stories this week, which you can read below.

“KCRW & Gustavo’s Great Tortilla Tournament is back, bigger and better!”: I talk with my comadre Evan Kleiman of Good Food about the #TortillaTournament, of which she is one of the judges.

“At Naugles, a heavy dose of Cal-Mex nostalgia”: My first review for Good Food in years! So great to talk with Evan on the air about food.

“Taco USA: A Conversation with Gustavo Arellano”: UC Irvine posts the video from a discussion I had at the campus in a couple of months ago.

“Most interns in top newsrooms come from very selective universities”: Axios highlights a not-nice comment I said about the intern programs at U.S. newspapers that I made…

“How America’s top newsrooms recruit interns from a small circle of colleges”: For this story…

“Más La Michoacana: Mexican paleteria expands presence, opens in North Long Beach”: The Long Beach Post name-drops me in an article about the ubiquitous spread of the ice-cream kinda-chain.

“On the Los Angeles taco trail with Marina O’Loughlin”: A British critic writes about Mexican food in Los Angeles, references my book, doesn’t invite me to eat with her. Hmm…

“KCRW & Gustavo’s Great Tortilla Tournament is back, bigger and better!”: My KCRW article that explains the #TortillaTournament in more detail. KEY QUOTE: “The top four finishers from each bracket last year return, much like Serena Williams always makes it into the Grand Slam tennis finals. But everyone else is new, representing the same tortilla diversity we highlighted last year: Handmade and machine-produced. Old and new. Restaurant and market. Powdery, buttery. Chicano, Sonoran, Tex-Mex. Some good, some not.”

“Review: No bad orders and plenty of sauce at Ellie’s in Long Beach”: My latest LA Times food review visits a great bistro in Strong Beach. KEY QUOTE: “Ellie’s has become such a point of pride for Long Beach boosters that Witzl recently announced a tasting-menu-only next door to open in the fall — and it’s already booked solid for four months.”

“For Mexican Americans, El Paso is a beacon. That makes racist massacre more devastating”: My LA Times story examines the long connections between LA and Chuco. KEY QUOTE: “Garcia says El Paso is more than just a station on the road to someplace better. He compares the influence that transplants have had in Southern California Mexican American life to how Midwesterners defined the economic, political and cultural mores of L.A through the 20th century.”

“Trona Catholics kept the faith as their town declined. Then, two earthquakes shook their ‘gem in the desert’”: My latest Column One checks in on St. Madeleine Sophie Barat, a beautiful Catholic church on the edge of Death Valley that’s now red-tagged. KEY QUOTE: “The San Bernardino Diocese, on its website, says that the ‘many visitors who have toured the church have voiced one agreement — that the church, set against the infinite vastness of the surrounding desert, projects a sense of eternity.’”

“What we’re into: Zacatecan-style birria de res in Hawthorne”: In which I rail about how the current SoCal foodie obsession over birria de res overlooks the fact that zacatecanos have enjoyed it here for over 40 years. KEY QUOTE: “I’ve gorged on it since I was a child — at family get-togethers in Anaheim, at quinceañeras and weddings held at the Armenian Center in Montebello, Basque handball clubs in La Puente, and countless union and church halls in between.”

“At Pikoh, Peruvian superstar chef Ricardo Zarate holds back his fastball for a West L.A. crowd”: Another food review, this one on a high-end spot that’s good, but can be much better. KEY QUOTE: “But Zarate kneecaps Pikoh throughout his dishes: They whisper Peru when they should scream it.”