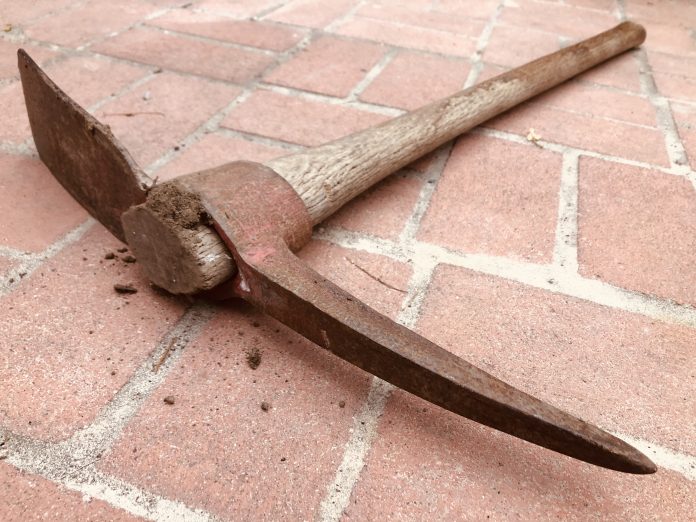 If you’re the child of immigrants, or from a regional culture in a new land, you eventually realize that the rest of the world is not like you.

That your people share some things — customs, words, foods, among others — that have no correlation to the dominant culture. A thing that you eventually latch onto as a personal point of pride – that your culture is worthwhile and unique and kickass.

For me, it’s the talache.

It’s an agricultural tool that consists of a iron head with a pick on one end and a broad blade at the other, on top of a long handle. You use it to farm – to till the soil, break rocks, to shovel in a pinch.

It’s as Mexican a tool as they come, a New World import given a Mexican name (its etymological roots come from the Nahuatl word for tierra and the Spanish word for axe, and is NOT listed in the legendary 1571 Nahuatl-Spanish dictionary Vocabulario en lengua castellana y mexicana, which does list six other types of axe-like tools that the Aztecs used).

It’s one not exactly known by gabachos, unless your idea of a fun time is a pick mattock.

It’s one I use today to prepare my garden for planting — and you should use it, too because it’s also hell of a workout.

And it’s also the root for one of my favorite verbs: talachear. To use a talache.

But also: to work hard — harder than most jobs. A job so hard there’s a special verb for it.

Back when I used to be an editor, I always asked prospective interns a simple question: what’s the value of hard work?

The query always helped me whittle away candidates, as most blabbered out a response that was earnest, if a little bit flabbergasted.

What an antiquated question! What’s next: how fast can you cast a linotype machine?

But to me, it’s an important question that tells me your worldview.

There was one student who gave me a cocky answer: He said it was about working smart, not hard.

He didn’t get an internship.

Throughout my entire life, people have called me smart.

I remember the time in high school someone complained to my cousin about how everything came easy to me while they had to work hard for what they had.

Vic launched into a tirade against the person, saying they didn’t know not only how hard I worked, but how I always put in more effort than I had to — because that’s what our parents taught us.

Don’t just do the job — do it right. Finish it. Be proud of it, but don’t think your accomplishment came from some inherent genius.

It came from working hard.

You have to talachear the soil multiple times to get it ready: first, deep enough to get all the weeds and roots, then with short cuts to aerate la tierra to ensure proper drainage.

You don’t talachear right, you get a bad harvest.

You don’t get the same results with a shovel, a hoe, some app or special program, or one of those twisty contraptions they used to advertise on 1-800 commercials back in the day.

I guess you can get a talache as a handout, but the best ones are those handed down to you by family members — and no matter how poor they were, they had a talache.

Sometimes, it was the only farming tool they had — but what a tool!

That pseudo-intern would’ve looked at the talache, and seen the tool of peons.

I see a smart tool, used by smart people.

I hope to give a few copies of Taco USA: How Mexican Food Conquered America as Christmas gifts. Did I read somewhere that they’re sold through a small bookstore in Santa Ana that’s somehow connected to your wife’s business?

You’re talking about LibroMobile, which is my preferred indie bookstore (read an article I wrote about them for Alta right here). It’s not connected to my wife’s business, but owner Sarah Rafael Garcia is a comadre who is our preferred bookseller whenever I hosted authors at Alta Baja, back in the days when we could.

But, yes: buy through LibroMobile. Although I have no problem if you buy my books through your local bookstore, the added benefit of buying through LibroMobile is that I’ll personalize it for you — buy your copy NOW! Oh, and it’s SanTana, not “Santa Ana” — pronounce it like the natives, porfas.

IMAGE OF THE WEEK: CHAKA LIVES!!! He was an infamous tagger in the late 1980s across Los Angeles and beyond — and he’s still around, apparently. Off Lorena and Whittier in Boyle Heights.

QUOTE OF THE WEEK: “I just don’t happen to think about it, some way. I guess I’m sort of psychically protected, anyway. I know that so long as I keep my eye on them, they won’t dare to do anything. As a rule, they’re cowardly curs, anyway. Keep your eye right on them, that’s all…”

–Eugene V. Debs, responding to John Reed’s query of whether he was afraid of the hilarious haters.

LISTENING:“Mi Gusto Es,” Luis Perez Meza. Nowadays most associated with Ana Gabriel, my favorite version of this rollicker remains this horn-heavy take by the too-forgotten Trovador del Campo, from an album that’s the second-oldest banda sinaloense of them all. Oh, to hear a live banda again at a primo’s party…

READING: “Listen to Donovan Bailey”: The 1996 100-yard dash Olympic gold medalist was always portrayed by the American media as arrogant. But you’ll get a different take on him in this profound piece in Maclean’s, Canada’s version of TIME.

SHOUTOUT TO: Maribel, who kindly donated 50 tacos to sponsor a full month of MailChango!

Also, Karina: I owe you a shoutout for your 50 tacos! Email me!

“James Beard Media Awards at Home”: I’ll be in conversation with L.A. Taco editor Javier Cabral Wednesday, July 29 at 12 p.m. PST on behalf of the James Beard Foundation as we talk about his amazing local-news publication. Viewing is FREE, but you have to register beforehand here.

“Do You Have a Nickname?”: Playwright Irma Herrera interviews me about #mexicannicknames.

“Essential Arts: Trying to map a post-COVID-19 future at the L.A. Phil”: My LA Times colleague Carolina A. Miranda shouts out my San Gabriel Mission coverage.

“Did baristas lose their jobs because of COVID-19 or because they tried to unionize?”: My latest Los Angeles Times food story talks about Augie’s Coffee House in the Inland Empire, a beloved mini-chain now at the center of a scandal. KEY QUOTE: “What’s going on with Augie’s is drawing attention from more than just caffeine fiends. The company’s struggle has attracted interest from baristas nationwide, as well as from local labor leaders who see the battle as a small-scale referendum on the Inland Empire’s economy.”