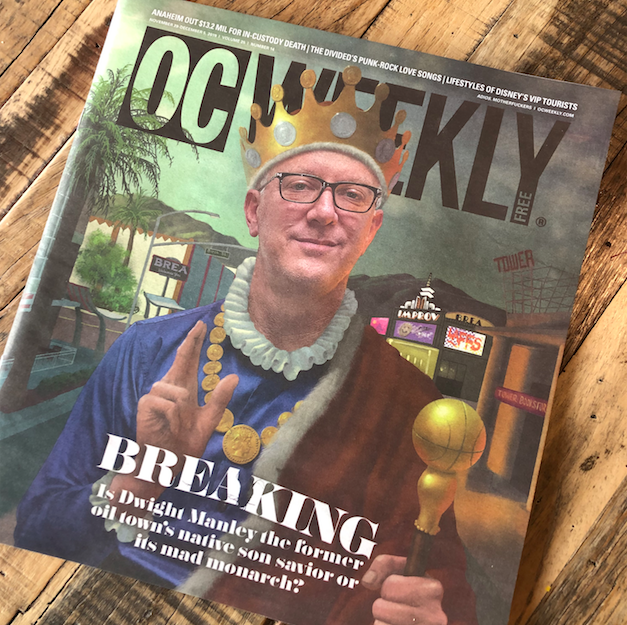 On this past Wednesday, the day before Thanksgiving, OC Weekly staffers announced they were unceremoniously out of a job with a cheery “Adiós, Motherfuckers!”

No way did I ever think that the alt-weekly of a region that needed an alt-weekly more than any other civic entity in the U.S. would ever end its run.

But it did, shut down by a callous, cruel fool named Duncan McIntosh.

But I write this canto not to throw bombs (I’m saving my arsenal for when truly necessary) but to celebrate that which cannot die.

But, in reality, the newspaper is immortal.

Because the Orange County of today would’ve been impossible without the inglorious basterds who call themselves Weeklings.

Who are now out of a job as we enter the holiday season.

But whose good works means their legacy will live forever.

To work at OC Weekly wasn’t so much a job as an eschatological mission.

The goal of every writer committed to the paper: To confront the evil, horrible, racist Orange County of Nixon, Reagan, Dornan, and Rackauckas, and destroy it so that the good may live.

The old journalism adage: comfort the afflicted, afflict the comfortable.

Sure, that was the basic mission of most alt-weeklies in the U.S. But OC Weekly was different.

Others swung far too the left, or were too SJW; OC Weekly was beholden only to the Truth, and lived to antagonized those who deserved it.

Other alt-weeklies served as springboards for talented writers to go to bigger, better places.

The ranks of former Weeklings at bigger places is impressive — The Atlantic, NBC News, HuffPo, Los Angeles Times, MTV in its heyday, and more. But the true Weekling only wanted to stay at OC Weekly and raise desmadre there and only there forever, leaving only when forced out by economic realities or a loser owner.

Most alt-weeklies published story after story, yet left no real legacy of changing the community they served.

Just some of the highlights in the OC Weekly’s span: innocent people out of jail. Guilty idiots in jail, out of politics, out of careers.

The prognosticators of trends, the unearthers of hidden histories.

The pin that gleefully poked holes at the Orange County bubble until it deflated.

One of the few newspapers in the United States whose newsroom reflected the demographics of the area it served.

The Stanley Ketchel of American weeklies.

And for that holy path, Weeklings were reviled.

But even its most committed haters had to read what the Weeklings would publish next.

Who was the next Burger Records, Taco Maria, Breath of Fire Theater? The subject of a Gilhooley cover image, a rant, a deep dive, an entry in the Scariest People issue?

The Orange County of today — majority-minority, with no Republicans in the congressional delegation, an enlivened activist front, and youngsters obsessing about the past — would’ve been impossible without OC Weekly.

And now, it seems it’s gone for good.

I ramble all the above, of course, with complete bias.

I was with OC Weekly from about 2001 until 2017, the last six years as editor. It was my first job as an adult, and what got me into journalism — an origin story I’ve told many times before.

It‘s the reason you’re reading me today – why you even give a shit about me. It was my dream job — a native Anacrimer writing about the place he loved and hated more than anything else in the world. I always joked that the only way I would leave the infernal rag was on a gurney or in handcuffs.

I left two years ago of my own volition, falling on my sword instead of allowing Weeklings to lose their jobs.

I am now a loyal Timesman, the subject of a canto in a couple of weeks, to mark my one-year anniversary at the Los Angeles Times.

Covering my homeland is now in my past. Today, I cast my pen toward California and the West, with a weekly “Orange County Line” commentary for KCRW (every Monday around 1:40 p.m. for Greater L.A. with Steve Chiotakis — #RollTide) my only regular rumination on la naranja.

But I will forever be a Weekling.

There’s rumors that someone might buy OC Weekly. Whoever that may be, know this: you are dealing with a treasure.

In the last class of Weeklings, you have the hardest-working, most-underpaid collection of freaks and geeks in the U.S.

In R. Scott Moxley, you have the greatest investigative reporter in California, who stuck around for 24 years. In editor Matt Coker, you have a brilliant, empathic, HILARIOUS soul — he logged in 25 years. In managing editor Patty Marsters, you have someone who started at OC Weekly on Day One as an intern, and never left in those 24 years.

Nearly 75 years of institutional knowledge between those three.

Proofreader Lisa Black? Nothing gets by her. The designers and art director? Makes the paper pop in a way it hadn’t since the days of Dustin Ames.

And in publisher Cynthia Rebolledo, you have one of the most remarkable, untold journalism stories of them all (just ask her).

Potential buyer: you can make a brilliant legacy by rescuing OC Weekly and letting it be its rude, crude, uncompromising self, and find an eternal fan in me and others if you do that.

But if you try to tinker with it, you will earn the undying wrath of so many.

We’ll see what the future brings to OC Weekly. But as the Ent of Weeklings past and present, I know our mission, while ending too soon, was more successful than anyone could’ve ever imagine.

PS, the only people reveling in the shutdown of OC Weekly are white supremacists, PC pendejos, the corrupt, and plain ol’ losers.

To them, I say: shutdown DEEZ NUTZ.

Why is Cinco de Mayo so important to my compadres at MEChA and two, why is it celebrated with Aztec dancers???  In my view, it would be more interesting if we dressed in French military uniforms from the period and played out such battle.

IMAGE OF THE WEEK: Thanksgiving dinner with los de mi Tió Gabriel, with a FABULOUS plate of entrees cooked by my cuz Beatriz. Not pictured: her AMAZING pecan pie and pumpkin roll — zacatecana power!

LISTENING: “Last of the Steam Powered Trains,” The Kinks. Official theme songforREAL Weeklings, a bluesy chinga tu madre to the haters and modernity as we barrelled onward…

READING: “Been Here and Gone”: 2001 New Yorker profile of playwright August Wilson, who did for black Pittsburgh what Weeklings tried to do for Orange County.

“Newsletter: Incoming winter weather, and more in the week ahead”: In which my LA Times colleague and fellow alt-weekly exile Julia Wick calls me a “taco laureate”

“Ex-Newport Beach Harbor Commissioner Closes OC Weekly”: In which I tell the Newport Beach Independent that Duncan McIntosh is a “callous, cruel fool.”

“The Shuttering of OC Weekly Leaves a Gaping Hole in Orange County’s Media Landscape”: I nab a mention here via Los Angeles Magazine.

“Santa Ana shoulders the brunt of OC’s homelessness”: My latest KCRW “Orange County Line” commentary talks about how the rest of OC uses SanTana as a homeless dump, and how the city should sue the likes of Irvine and San Clemente for this bullshit.