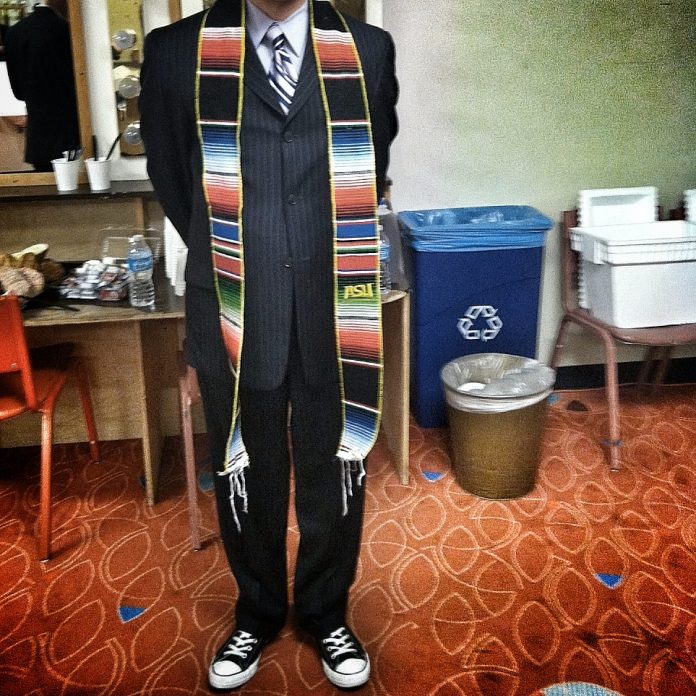 Next month, like most Junes for the past decade, I’m scheduled to give speeches –award banquets, graduations, eulogies — where I need to write something out.

Now, if you’ve seen me speak in public, you’ll know I almost always do it without any notes. I’m frankly more entertaining this way than if I wrote something out.

June isn’t the time for that.

Whenever I’m invited to honor folks, I try to focus on a message because I feel the occasion deserves some solemnity and thinking. I freely admit it’s not me at my most entertaining.

Instead, it’s me attempting to be permanent, instead of ephemeral.

I still have people congratulating me for a UCLA commencement speech I gave over a decade ago. I know how to give ’em.

I need to write out those speeches this weekend. So following is one I never published, one that I gave to a continuation class in La Habra last year. Enjoy! 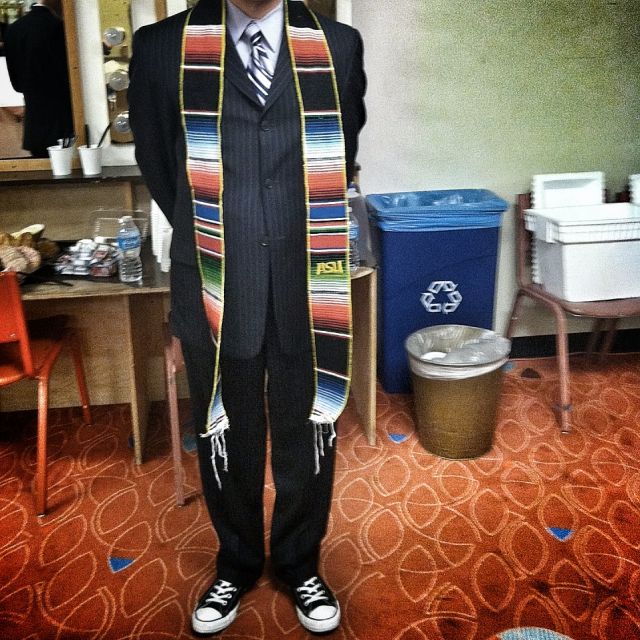 Me, before giving a commencement speech at Arizona State in 2013, back when I wore Chucks
First time reading this newsletter? Subscribe here for more merriment! Buy me a Paypal taco here. Venmo: @gustavo-arellano-oc Feedback, thoughts, commentary, rants? Send them to mexicanwithglasses@gmail.com

And here we go…

It’s an honor to speak to ustedes, because everyone graduating today is a living embodiment of a saint. I don’t say this to try make everyone like me—I mean it. Saints, all of y’all.

Many people would probably call many of you sinners for not graduating from high school the “right” way. And many people would laugh at the idea of calling this class of graduates a bunch of saints. But many people are clueless. Besides, most of society doesn’t even know what a saint actually is.

Nowadays, we like to think of them as perfect people who committed no wrong, and so the rest of us mortals should strive to such standards. That’s not how I see saints. Instead, my definition comes from an unlikely source: Chicano leader Cesar Chavez. He once told a reporter, “There is a big difference between being a saint and being an angel. Saints are known for being tough and stubborn.”

There was another quote I thought Chavez said about the difference between saints and angels, but I can’t find it and you should always attribute your sources. But the way I remember it, it went something like this: You should never want to be an angel. Angels are the ones who are pure and perfect and really live boring lives because they’re already in heaven.

Saints, on the other hands, have to work toward the reward. They’re the ones who get dirty and tired and are usually unappreciated. Who make mistakes and curse. But it’s those trials and tribulations that make people into saints, that make them worth emulating.

That is all of you.

I’m not going to try and pretend that the challenges that I faced when I was a high school graduate match up to yours—the hardest thing that happened to me at Anaheim High is when they stopped selling chimichangas.

But I am older than ustedes, so I can give some you advice from the other side of adulthood. And I can tell all of y’all that you’re well-equipped to face the rest of life. It’s going to be hard—but you already know that. Things aren’t going to go the way you want them to—but you already got used to that. You can’t face life on your own—and all the love in this room is proof of that.

I do not know your personal stories, but I know they’re lives that others should learn from. You’re all graduating today with tales of perseverance, of overcoming barriers that would cripple most adults, let alone people just about to begin life.

You have knowledge and grit that most people would pay to have. But it’s not over yet. It’s time to sharpen those strengths even more to face the next couple of years. It’s time to go get that college degree, that vocational training, the professional certificate that will get you to the next level. What’s most important to remember about ustedes right is that y’all made it—you didn’t have to do any of this, you chose to. And you succeeded. That’s one of the secrets in life.

Saints in the Catholic tradition inspired movements of people who wanted to follow in their footsteps. So proclaim your saga to the world; don’t be shy. As saints, it is now your time to do that. You have gone through valleys and depressions and not only survived them but thrived. It’s now your responsibility to help others who will also go down the path you just finished.

My challenge to all graduates here today is to become a mentor—in your personal lives, sure, but also with the students that you leave behind, and the youngsters in your neighborhood and beyond. Many of you might not want to do it, because your own lives are tough enough—but that’s not good enough. When you are equipped with gifts, it’s your duty to share them with those who need it. Your success for the future is already guaranteed—but not that of others.

I really mean it when I say I’m in awe of ustedes, so I’m not going to embarrass myself by recounting something that happened to me in the past so that I can try to show I’m just like everyone here. I’m not. But I do have a good story, and it’s about a former intern of mine named Frank. He was like many of ustedes—didn’t finish high school the traditional way. Had a troubled life. Got written off by society as a lost cause.

Frank wouldn’t allow himself to be left behind though. He got his high school diploma and put himself through Fullerton College, where he made a name for himself as a reporter at the school newspaper. Frank eventually became an intern at OC Weekly, the paper I used to edit. We were all immediately impressed by his drive, by his ambition, but also by how his experiences put him at an advantage over interns who went to fancier schools. Life showed him to not make any excuses and to get the job done—but to also ask for help from elders when he needed it.

And he did. Frank made national news when neo-Nazis assaulted him during a pro-Trump rally in Huntington Beach last year. Not only did Frank not cry or even get a scratch on him, but he was able to write a story that afternoon that got innocent people out of jail. Frank’s work got cited by national publications, and drew the praise of some of the most prestigious investigative reporters in the country, astounded that a 21-year-old kid could beat them at their own game.

He’s going to come out on a national television show this summer to talk about his experience. And the kid who almost didn’t get his high school diploma is now thinking of going to the journalism school in Berkeley, one of the most prestigious in the United States.

Frank was one of you: A saint. Go teach the world how to live, how to succeed. Gracias, and God bless.

What’s a good way to learn to plant and grow chiles in the backyard?

Full sun. Pots work (make sure they’re big), but ground is better. Water deep at least 3 times a week. Keep pests away with neem oil, ladybugs, or your own fingers. And don’t count your peppers until they hatch. 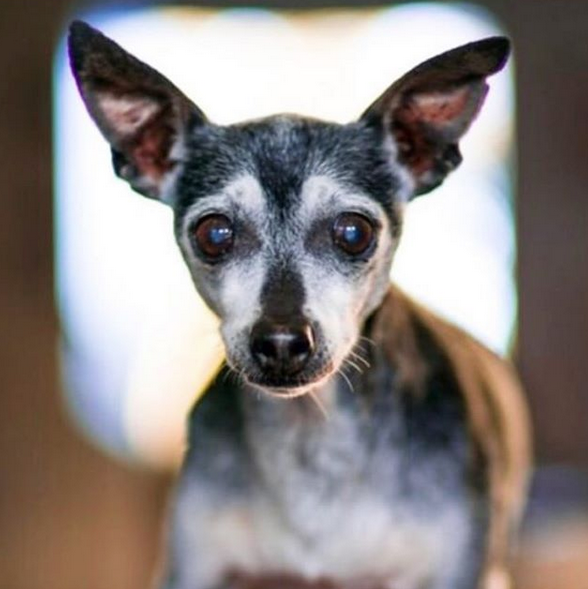 IMAGE OF THE WEEK: When it rains it pours, and just four days after we buried my Mami, I had to put my dog Marge to sleep. Read more about her amazing #puppyessence here.

LISTENING: “Lute Concerto in D Major,” Antonio Vivaldi. I’m a big fan of Baroque music, especially Vivaldi, ESPECIALLY this soother. Fun fact: I know how to play this song on the guitar — one of like three I know!

READING: “The Prophet of All Media”: Out of all the profiles of Howard Stern (a HUGE influence on my career and life) coming out right now, this one just might be the best. The Talmudic opener will, um, intrigue you.

“The Collected AHP”: Buzzfeed’s Anne Helen Peterson is one of my favorite contemporary journalists for her smart take on virtually everything — burnout culture, the transformation of Waco, alt-losers, among many subjects. So to see her plug my recent Chipotle rant in her newsletter is quite the honor!

“Alta Journal Letter to the Editor”: A reader of the literary journal for which I serve as contributing editor takes issue with my In-n-Out rant of last year.

“How I went from Writing about SoCal Cerveceros to brewing with Socal Cerveceros”: My former beer critic, Robert Flores, mentions me in his origin story.

“‘Food, Identity and Culture in L.A.’ at JANM”: Plugs an event I’m appearing in TODAY. Like, THIS AFTERNOON.

“Maps, Spam & Pan Am”: The Statesider newsletter plugs the Eater package on Mexican food in the United States that I guest-edited last month.

“The transformation of a centuries-old refuge in New Mexico”: My latest story for High Country News addresses the changes in the Santuario de Chimayó. KEY QUOTE: “A remodeled Santo Niño chapel resembles Catholicism as imagined by Precious Moments, with big-eyed child angels and gaily painted wooden birds everywhere. The new look was the antithesis of the stark, mournful New Mexican-style bultos (wooden statues of the saints) and reredos (altar screens painted in muted colors) inside the Santuario.”