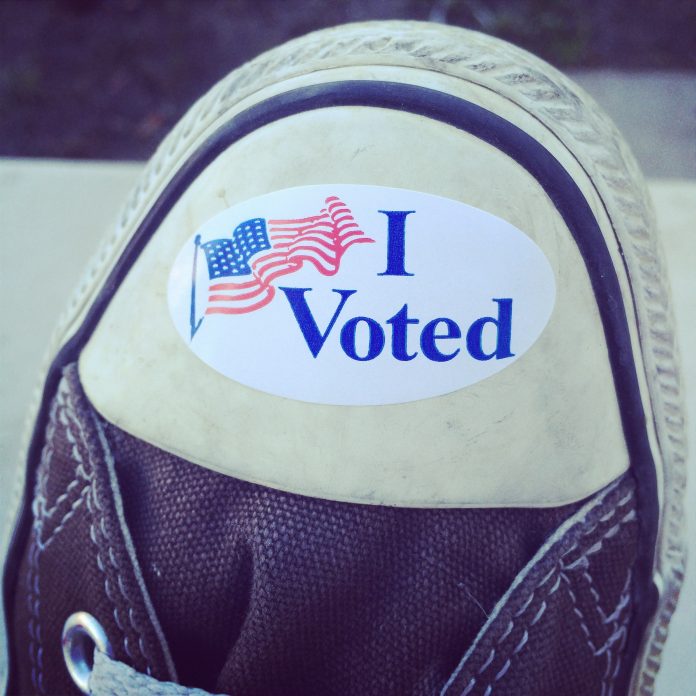 “So I see you don’t wear Chucks anymore!” my tax guy told me when we met about a week ago. “Moving on up in the world!

He had noticed my brown leather shoes that I bought at Nordstrom’s about three years back. Cost me about $200 – the most I had ever paid for shoes. He assumed that my new job at the LA Times meant that I was now rolling in cash and could afford such niceties.

But he was also referencing the fact that I used to wear Chucks all the time. So to see me not wearing All Stars anymore was…weird.

Chuck Taylor All Stars were such a part of my identity, that a high school youth conference where I give a speech every year once designed their conference T-shirt to mimic Chucks, in my honor. I have that T-shirt in my archives, along with the last pair of Chucks I ever owned: a pair that my sister bought for me for Christmas about two years ago.

I never wore that gift, I told my tax guy, because I don’t wear Chucks anymore. I hadn’t worn Chucks in about three years. And I never will again.

I had finally grown up. 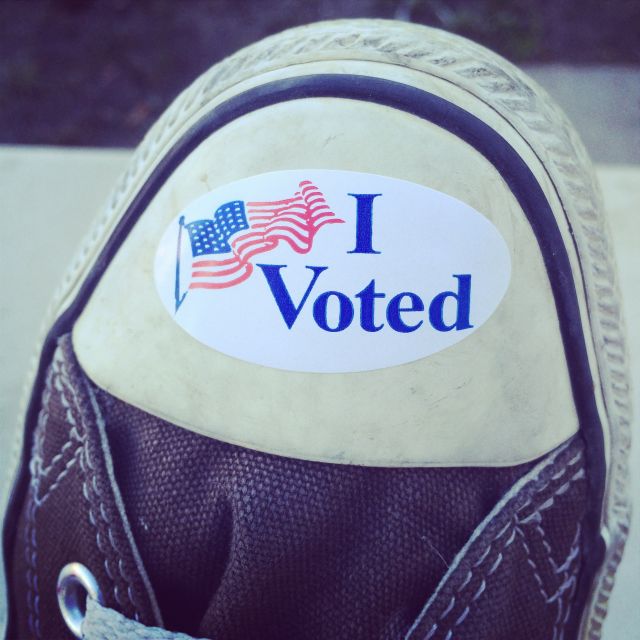 Used to do this picture every election…

A while back, someone asked me to do a history of myself through the shoes I wore daily throughout my life.  It’s a great idea, because the shoes people wear tell you a lot about who they were, they wanted to be, and who they became.

My list isn’t too long. As a kid, I remember owning Reebok’s and LA Gear. Never a pair of Jordans – not only could my parents not afford them, but no way on earth with my mom spend that much money on sneakers.

I began wearing Doc Martens in eighth grade, and still have a pair that I bought over a decade ago, which replaced my originals. From about my senior year in high school to about the time I attended graduate school, I wore a since-discontinued line of Converse skater shoes that my mom used to buy at an indoor warehouse sale in Fullerton at the ridiculous price of two pairs for five dollars.

One of, like, two regrets in my life: not buying dozens of those when I had the chance.

I never wore Chuck’s growing up – they didn’t really mean anything to me. And I’m not quite sure why I eventually bought some. But once I did, they became a part of my identity. I loved them so much, I would always have two pairs on me – the ones that I used all the time, and a going-out pair that I would clean with a Q-tip, so gleaming I wanted them.

There were so ubiquitous on me that people asked why I hadn’t worn them to my wedding.

But by then, I was tiring of Chucks.

The arch support was always terrible, especially for a flat-footer like me who has one leg shorter than the other. Each pair lasted a good year, which wasn’t a problem when I could go to the Orange Coast Swap Meet and buy some for 25 bucks.

But now, even on Amazon, a pair of low tops cost $50. I’m old enough to remember the days where the high tops were cheaper because they weren’t as hip—not anymore.

I’m a cheapskate. Paying that much for shitty shoes wasn’t worth it.

So I dumped the Chucks and finally got some good shoes. The one-time investment has basically equaled how much I would’ve paid for Chucks over three years. The upkeep is easier — some regular shoe s hine, and I once had to replace the soles.

Because I wasn’t going to be caught in an Adlai Stevenson moment, you know? 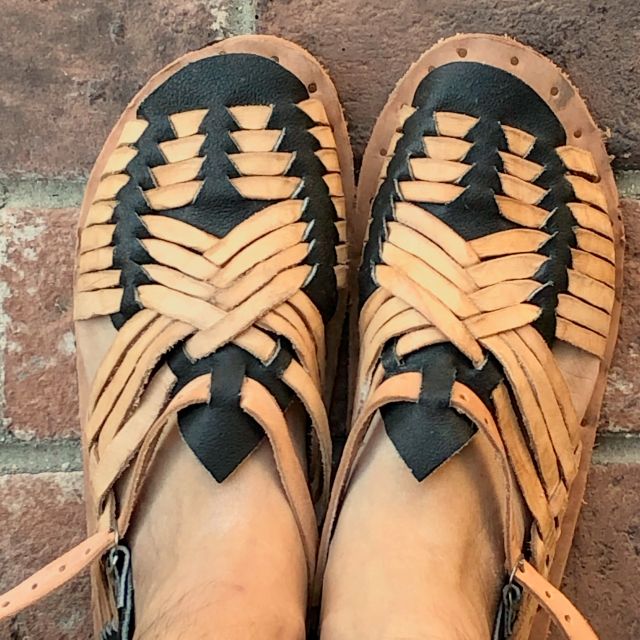 These are what I wear most of my days, actually. Straight outta Zacatecas!

I shall not quote anymore T.S. Eliot lest his estate come after me.

But I did tell my tax guy — a nice Chicano from Pico Rivera who does the numbers for little old ladies from Pasadena and San Marino — that I’m glad I have a tax guy so focused on saving me money that he doesn’t notice too much how I dress.

Beside, I told him, I’ve always felt old, so I never feared the march of age. I’ve actually always looked forward to turning into a bona fide viejo complete with walking cane and oversized car.

And Chucks for me are a young person’s shoe.

I’ve lived in Orange County my entire life, which gives me a front-row seat to the infantilizing of the American male. I cringe when I see men act, dress, and date decades younger than they should. Straight-up vampirism. A denial of the inevitable, which I guess is a good metaphor for late-stage capitalism.

And no way would I be part of it.

So I remembered my 1 Corinthians 13:11, and left my Chucks behind.

And have never regretted it.

Except for those two-for-five Chucks. Man, I would’ve worn those into my 90s — would’ve been the paisa Hans Moleman if I still had ’em!

Congratulations on your job at the Los Angeles Times. It’s nice to see that maybe the LA Times has changed from the mediocrity that they were back in the ’90s and ’00s.

I say this from the perspective of a person of Mexican parents who lived in OC from the early ’70s to the present day. Most of my life was lived in Santa Ana, Garbage Grove, and currently in Anaslime. (The nicknames are just for fun. Both are good cities)
We had the OC Register and the LA Times as our major dailies in OC back then. We all know how the OC Register hated all things Mexican and was worthless. The LA Times was better, but it was no Wall Street Journal at that time.
One issue sticks out was the defeat of Bob Dornan by Loretta Sanchez. The LA Times championed Dornan and was nothing more than a parrot. The main person I remember was named Peter Green? Fraud. Illegals voting. Pure rubbish by the LA Times.
People hated Dornan where I lived in SA. He was defeated and lost, not by fraud, but by the voters. The LA Times would not accept the truth, and Dornan wouldn’t give up his license plate.
It was at this time that I started looking at the OC Weekly as journalism for the masses. They got it. That’s where you come in. You got it. You spoke it. You wrote it. You meant it. Thank you.

Mi pregunta: what you can you tell us about the current LA Times that would make those of us who remember the Dornan/Sanchez debacle want to even pay a nickel to read the paper? 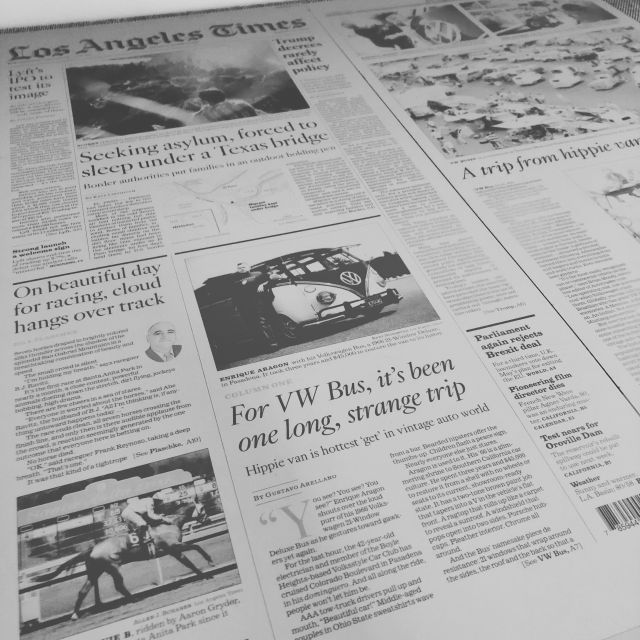 The aluminum plates for my recent Column One on VW Buses. Going to my archives!

I’m very aware of the Times coverage of Dornan back in the day — my brilliant former colleague, R. Scott Moxley wrote about those sins long ago.

You know what the Times also used to do? Call Mexicans “greasers,” “wets,” and “illegals.”

You know what the Times also did? Hired me.

Newspapers make mistakes. The New York Times published the lies of Jason Blair yet is showing a way forward on newspaper profitability. Washington Post editor Marty Baron is hailed as the country’s best editor for his role in exposing pedophile priests, but did little when he headed the Times’ Orange County edition, when OC went into what was then the largest municipal bankruptcy in American history.

But the best newspapers grow from their mistakes.

And that’s where the Los Angeles Times is now. The newish owner has hired a bunch of great people — and me.

So if you claim to be a fan of mine, SUBSCRIBE ALREADY. Mexicanos in OC — hell, all good people in OC — should subscribe to the LA Times because not only are we better than the ghost that is the Orange County Register, we’re ready to…well, I can’t say just yet.

I would never join a paper I didn’t believe in. And I believe in the LA Times. So if you subscribe to this free newsletter of mine, SUBSCRIBE ALREADY TO THE LA TIMES. No seas pinche codo. Working for them allows me to do this, you know?

LISTENING: “Parranda Larga,” Jorge Negrete. This is not my favorite of El Charro Cantor, but I’ve always loved this song. he does his usual magnificence on this song of a heartbroken carouser on a sad, drunken party. Been hearing it a lot on 980-AM La Mera Mera — I told you I’m old!

READING: “The Man Who Saw Trump Coming a Century Ago”: Truthdig consistently puts out great commentary and does a good job of connecting the past to the present, and this refresher on Thorstein Veblen is testament to what a great publication it is.

Matt Welch, my former editor at Reason, shouted me out on Real Time with Bill Maher about the Latinx wars. Haven’t seen the full segment, but here’s the clip with me, as tweeted out by my former colleague, Rich Kane. Hey, maybe Maher will actually invite a Latino now that’s not a Hollywood actor!

“Blase Bonpane, USC football player turned priest turned peace activist, dies at 89”: My latest story for the Los Angeles Times is an obituary of a legendary KPFK-FM 90.7 radio host. KEY QUOTE: “His first-hand experience in Guatemala and blunt language made Bonpane a go-to source for the American media during the 1970s and 1980s, as Central America plunged into civil war.”