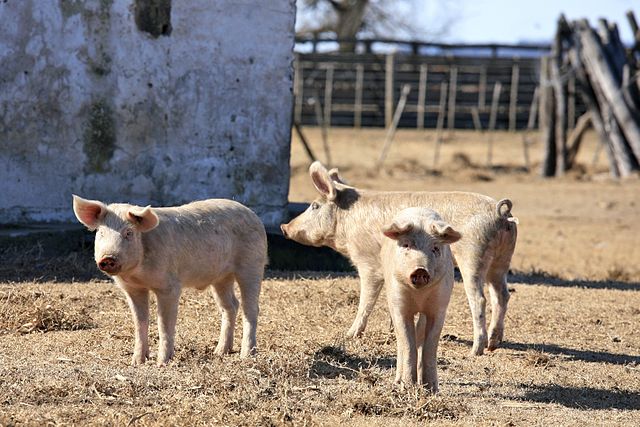 Did you ever play that parlour game where everyone says what past decade you’d want to live in?

Okay…what past decade would you want to live in if you could?

The economy is devastated. Madmen grab power across the globe. Fascism is on the rise, but so is people power.

And here we are.

What I also loved about the 1930s was the brilliance of culture that emerged — WPA projects, art, music, film, and so much more.

And one of the most popular artifacts of the time was the Disney cartoon Three Little Pigs and its hit song “Who’s Afraid of the Big Bad Wolf?”

Both were not-so-veiled moral lessons for Americans: Be like the Third Little Pig (Practical Pig was his name, dontcha know), and the Great Depression won’t get ya.

While I liked the cartoon, I never particularly cared for the pigs — Fifer and Fiddler were too cavalier, but Practical was too churchy for my taste, even if I identified more with him than the others.

Besides, there was another children’s tale of a piglet trio that I identified with far more: “Cochinitos Dormilones” (“Sleepy Little Pigs)” a song by legendary Mexican children’s composer Francisco Gabilondo Soler, who went by the stage name Cri-Cri.

And the moral lesson there is one we can all use right now: help others.

“Cochinitos Dormilones” (which I always knew as “Los Cochinitos,” and always will) is markedly different from its English cousin. The villain isn’t a Big Bad Wolf; it’s poverty. But two of the sleeping cochinitos are blissfully unaware of it — one dreams about eating a big cake, the other sueña about sailing.

The third cochinito, “lindo y cortés,” however, knows not all is right in their lives.

So his dream? “Work to help his poor Mom.”

Guess which cochinito I identified with?

I always tear up when I hear the song, not just because it’s so sweet, but because my mami always played it for me and my sister when I couldn’t have been more than 6 (my sister is two years younger than me).

It takes me back to the granny flat on la Filadelfia where I grew up, to my mom (who would’ve been in her mid-30s) play-acting the Cri-Cri tunes as the record played on the turntable. My memories are firmly fix in a soft incandescent glow, as she would play the songs before our bedtime.

So much love for us.

But now that I hear “Cochinitos Dormilones” as an adult, I nod at the message.

Yes, we should all be like the third cochinito. Help others, especially those who take care of us.

But there is no ultimate judgement against the other cochinitos, the way Three Little Pigs mocks the foolishness of the first two piggies. All are entitled to their dreams; “Cochinitos Dormilones” ends with them sleeping and dreaming peacefully through the rest of the night.

All are entitled to their dreams, because they’ll return to hardship when they wake up.

You’re all entitled to your dreams, your fears. Especially in hard times like these.

But you should ultimately want to help others. Because as Rick Warren once famously wrote, it’s not about you.

It’s about those who take care of us.

And they need us now more than ever.

I’ve been hearing “this isn’t normal” a lot over the last three years. Yet, aren’t Trump and his people simply behaving in ways that are pretty normal throughout the world? For that matter, hasn’t the U.S. behaved pretty much the same way most of the time, and what isn’t normal is merely the rhetoric about equality, justice, power to the people, and the other stuff some of us white folks were encouraged to believe?

Hey, genocide, slavery, and conquest don’t lie. But to quote Bonasera the undertaker, I believe in America. It’s the country I was born in, and the country that gave my parents a chance when Mexico wouldn’t. But because I love it, I will always acknowledge its sins past and present — but do my part to better it. Criticizing allows me, fuels me to do so. People who talk shit without doing something about it or deny its ugly past should just get a room already.

As for the current administration — I used to say something about it on The Tom LeykisShow. To quote Casey Stengel, you can look it up!

IMAGE OF THE WEEK: A needlepoint of my mami’s name, made by a friend, that I have hanging at my house. Never forget…

LISTENING: “Once in a Lifetime,” Talking Heads. Very telling about me: I know David Byrne more as the creator of world-music label Luaka Bop than his actual music haha. In fact, I had never even seen the video for this classic until I got the above link — interesting! And so I finally paid attention to the song — like a electro-bop mantra. I’m sure DJ Baby Nelso will school me more…

READING: “Dinosaurs Is the Only Family Sitcom Grim Enough for This Moment”: I don’t really care for Slate — usually too precious — and I never liked the ABC sitcom. But this essay is smart, provocative, and has one of the best closing lines I’ve read in a while.

I’m rebooting my stint as scholar-in-residence at Occidental College’s Institute for the Study of Los Angeles! Every Tuesday, from noon-3 p.m. people can book half an hour with me and we can Zoom (over a secure line, of course) one-on-one about WHATEVER. Interested? Email me here!

This is my latest project for the Los Angeles Times, a 15-minute podcast that appears Monday through Friday. Do me a favor: Download them all, stream them, then leave me a five-star review on Apple–each one helps!

“Thank Your Grocery Store Worker Today”: I talk to an Albertson’s cashier.

“Mike Davis on the Coronavirus”: I talk to the Jeremiah of Southern California.

“Noorani’s Notes”: This great immigration-focused newsletter shouts out my “Coronavirus in California” podcast.

“Cinco de Mayo and Taco Tuesday converge”: Something called Alpena News cited something I wrote about burritos years ago.

“California Playbook”: Politico’s California newsletter shouts out the mariachi episode of my podcast and also one of my Bakersfield hand-sanitizer story here.

“Fingers Crossed for a Better May; More Encouraging Drug News—Coachella Valley Independent Daily Digest: April 30, 2020”: Publisher Jimmy Boegle shouts me out as someone who donated to his paper’s fundraising campaign, and you should, too!

“Did a Bakersfield nursing student invent hand sanitizer? Coronavirus reignites the Lupe Hernandez debate”: My latest LA Times front-pager is co-written with my colleague Alejandra Reyes-Velarde and talks about an urban legend that has gone all over the Internet. KEY QUOTE: “But at this point, the truth — Lupe Hernandez from Bakersfield is almost certainly a modern-day urban legend — is not so important to those who continue to spread the story. Lupe is now a folk hero in the most literal sense, glorified because of what her “story” and its creation mean to them.”

“El Paso officials want to bulldoze a historic barrio. This 92-year-old woman is in the way”: Chavez Ravine in Chuco for the LA Times. KEY QUOTE: “I’ve lived here a long time, and I want to stay here,” she said matter-of-factly in Spanish, before getting a twinkle in her eye. “Tell the city to not be so scared of me. I’m not here with guns. It’s just me and the pigeons.”

“Thousands fill OC beaches without masks or social distancing during heat wave”: My latest KCRW “Orange County Line” talks about all those fine people who did exactly what the headline states!