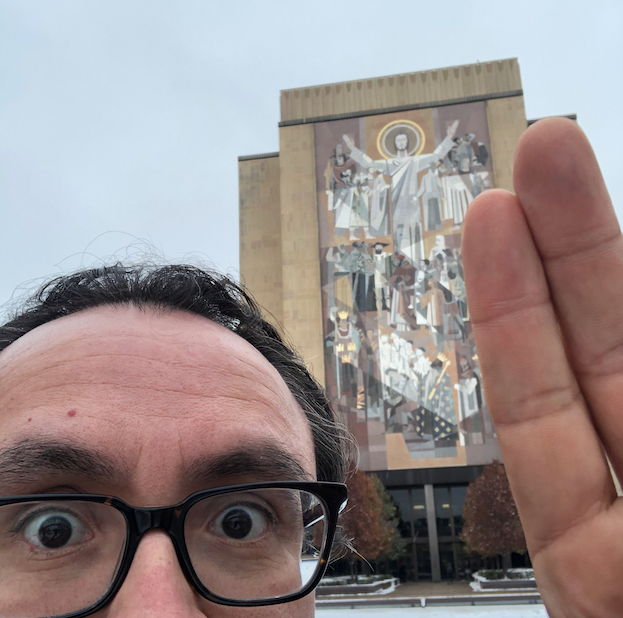 When I was reaching my teens, the only dream I had was to attend the University of Notre Dame.

I knew Knute. The fight song. The Gipper. Frank Leahy and Ara Parseghian and Rocket Ismail. “Play Like a Champion Today.” Touchdown Jesus. USC and Michigan and Touchdown Tommy Vardell and Boston College.

The love of Notre Dame got me to read Sports Illustrated, to get interested in history. It got me to convince my parents to buy me a Fighting Irish jacket — but since we weren’t the richest of families, they bought me an Apex brand instead of the Starter chamarras worn by the cool guys at Sycamore Junior High.

It was an ugly jacket — but it was mine. It was Notre Dame.

I dreamed of attending Notre Dame even though I never played any high school football (although I once scored four touchdowns in one game—sandlot stuff, but still). I dreamed even though I had no idea what college really was, other than a place where they played football and basketball.

By my senior year, my grades were so bad I couldn’t even get into Cal State Fullerton. The dream was dead.

I continued to root for Notre Dame football, even as its fortunes sunk through the 1990s and 2000s. But I wasn’t as passionate of a subway alum as before. And as I got older, I viewed my boyhood Notre Dame fascination with simultaneous admiration and melancholy.

What gumption for a 13-year-old Mexican kid to dream he could get to the Golden Dome! To wear his ND hat to school despite getting it constantly knocked off his head by bullies!

More importantly, what the hell happened to my jacket?

I remember I wore it until at least 10th grade, until the pockets got holes, until the stitching on the collar became frayed. I’m pretty sure my mami threw it away.

But the jacket has mythic status for my brother and cousins, who chalk it up as yet more proof of my individualistic character.

For me, it became a metaphor for innocence lost. High school is when I gave up hope of ever going to Notre Dame, and when I learned that wishes usually don’t come true.

Then came this past week. 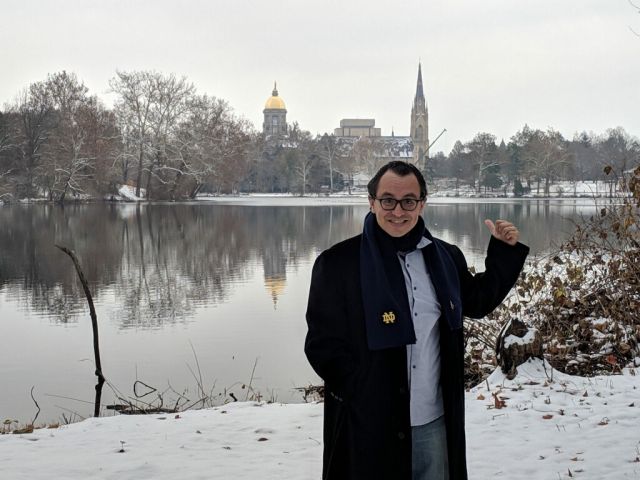 Me in front of Saint Joseph’s Lake at Notre Dame, ND scarf and all

About a year ago, UC Riverside Professor Adrián Félix asked if I could do the forward to his debut book Specters of Belonging: The Political Life Cycle of Mexican Migrants. It dealt with a subject near and dear to my heart: Jerez, Zacatecas, where Félix is also from.

Not only that, Profe Adrián asked, could I ask our fellow jerezano, legendary cartoonista Lalo Alcaraz, if he could draw a cover illustration?

Specters of Belonging will debut in December; Félix’s first public reading will be at my wifey’s Alta Baja Market in downtown SanTana on Dec. 20 (details to come on THAT). But before that, he wanted to arrange a panel with Lalo and I.

His longtime mentor, Ricardo Ramirez at the Department of Political Science, would host us as on behalf of the Institute for Latino Studies. I needed to wrap my head around this when I got the invite. Me? At Notre Dame? 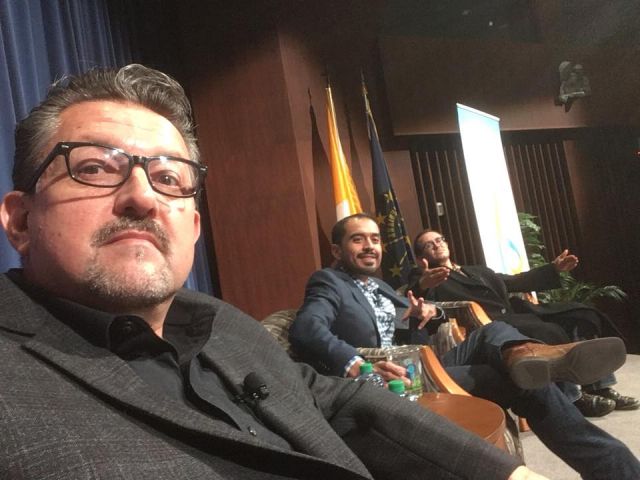 My visit was a dream. Profe Ricardo made zacatecano-style mole and fabulous margaritas at his home, and even cooked quesadillas with queso añejo courtesy of Profe Adrián.

The panel for was a hit — over 180 people. I met a Chicano from Anaheim who said he was the only one of his kind when he moved to South Bend in the 1980s; I met a freshman santanera who was proud to rep the new OC out in the Midwest.

And I met scores of Latino professionals — almost all of them transplants from California or Texas — who found their own private Aztlán in the school I had once idolized. They were tickled pink about that, and invited me to return next year for their football tailgates, where they cook up some carnitas.

Carnitas. At Notre Dame. What a world.

I appeared on a podcast recently, and the hosts asked what would Adult Me tell Teenage Me. For the first time in seemingly forever, I was at a loss for words.

As I’ve written before, I don’t like to look back at my life. Too much work ahead. But now, I had to.

I stumbled for a good minute or so before I started to say something. Then I stopped, because it finally hit me. I said something to the effect that I’d tell Teenage Me to not stop dreaming, because life would eventually show you that dreams can and usually do come true—although rarely in the way you expect.

And when you make peace with that, you’re ready to conquer the world.

Before I got on my flight home, I texted my siblings a photo of a candle I lit at the Our Lady of Lourdes grotto on the Notre Dame campus as gratitude for my short visit.

“Your dream school (you used to say that),” one of my sisters said.

The first and probably only selfie I’ll ever take haha

LISTENING: “Pipeline,” The Chantays. A blue wave hit Orange County this week, so why not celebrate with perhaps the best surf instrumental of them all?

READING: “The First Asian Woman Immigrant Dazzles America”: History News Network is a website for academics written for public consumption. They always have fascinating essays, debates, and even theater reviews — and this one, on the first-ever Chinese woman to migrate to the United States, is HNN at its best. Hope the play comes out to Southern California…
Gustavo in the News

“Idyllic citrus images of California had hidden smudges”: My Inland Empire Boswell David Allen checks in on an awesome exhibit at the Claremont Colleges Library where I presented among academic titans.

“The Blue Wave and the OC”: What the congressional races tell us about Republicanism behind the Orange curtain”: I return to my old stomping grounds of Airtalk with Larry Mantle on KPCC-FM 89.3 to talk about the death of the OC GOP, with a HELL of an exchange between Larry and I!

“Dana Rohrabacher-Slayer Harley Rouda Ditches Predecessor’s “Quirkiness””: My former OC Weekly colleague R. Scott Moxley gives a shoutout to the fact that the only reporters Dana ever blocked on Twitter were him and I haha.

“Brave Californian Admits in Public That In-N-Out Is Just Okay”: So I wrote something on In-n-Out (linked below), and Grub Street was the first people to take a crack.

“Okay, which Takeout commenter wrote this ‘In-N-Out is overrated’ op-ed? Declare yourself”: The Takeout somewhat enjoys my takedown of In-n-Out.

“Does In-N-Out Actually Suck? An Investigation”: Uproxx weighs in on my In-n-Out missive below.

“How do you solve a problem like Malibu? A call for revisiting Mike Davis’ ‘Ecology of Fear’”: Archinect misspells my name while praising my praise of Mike Davis. It’s all good — I have no idea who they are.

“Midterms spotlight rising Latino power”: The homie guanaco Robert Lovato shouts me out in a column about what his headline states.

“California Playbook”: POLITICO’s fine newsletter on all things Cali politics shouts me out twice this week for some of my stories below.

“UpFront on KPFKA”: I appear on the ORIGINAL Pacifica station to talk OC politics.

“Revisiting Mike Davis’ case for letting Malibu burn”: My latest California columna for the Los Angeles Times has me check in with the legendary prophet about this month’s horrific fires, which he called 20 years ago. KEY QUOTE: “But as the years go on, Davis’ bleak words read more like revelations than rants. Just as he argued, we build deeper into canyons and foothills, daring Mother Nature to give us her best shot — and then are shocked when she does.”

“In-N-Out is So So-So”: My latest commentary for Alta was NOT clickbait—anyone who knows me knows I’ve been ranting about this for YEARS. KEY QUOTE: “In-N-Out is a symbol of Southern California at its absolute worst: Eternal traffic. Nostalgia for a past that never really existed. A mob mentality. Fast food. And, worst of all, all hype and little substance.”

“How Will the OC DA’s Office Change Under Todd Spitzer?”: My latest KCRW “Orange County Line” addresses the once-unthinkable — Tony Rackauckas out of the Orange County District Attorney’s office, with his Shakespearean enemy Todd Spitzer IN.