I’ll admit it—big projects this week caught up to me, giving me no time whatsoever to pen a more-fleshed out newsletter. On the other hand, I’ve been wanting to do a census like this from the start.

I’m a superstitious fool, so I actually wanted to ask ustedes for feedback for Canto XII, then XII, then XII. But I always have so many pinche thoughts to share that I just kept pushing the ask back and back and back.

So the name of the game here is simple: How’m I doing?

For the non-New Yorkers or political junkies out there, it was the catchphrase for former Mayor Ed Koch. The media out here on the West Coast always depicted him as a lovable uncle of sorts, whether it was on The Muppets Take Manhattan or on TV. I never got the corruption, the race-baiting, and the life in the closet that I now know was part of the man. 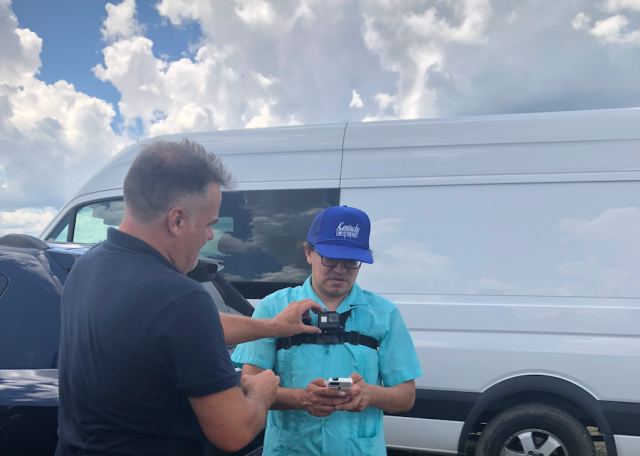 Me getting fitted with a GoPro in Pikeville, Tennessee, while probably engaged in some GIF war
But I still love his “How’m I doing?” schtick. It was Koch’s public invitation for New Yorkers to give him feedback on his job, on the spot.

So, have at it folks. You and I have been doing this now for half a year. How’m I doing?

What stories of mine or newsletters have stuck out for you? What stories am I missing? What can I do better on? What projects should I tackle? What do I need to learn? Should I repave my driveway?

Think of this as my own AMA: Ask me anything.

I’ll do these twice a year, and I might even share some responses in my next newsletter. Send me feedback at mexicanwithglasses@gmail.com, or just respond to this email (although I prefer the former).

I’ll start with the truth: WONDERFUL.

LISTENING: Radio Santa Ana: This community radio station is part of the ever-impressive Centro Cultural de México and has an FM signal (104.7) in Orange County that can clearly be heard from John Wayne Airport all the way to Disneyland. GREAT mix of talk shows and Latin American music, with a special emphasis on cumbias, sonideros and banda oaxaqueña—the pulse and rhythm of SanTana.

READING: “The Legendary Language of the Appalachian “Holler”: I’ve always been fascinated by language, so this dive into whether the English of Appalachia really does sound like that of Elizabethan times particularly resonated with me. Myth, tradition, and reality, all in y’all and “I reckon.”

“California couple find treasures in World’s Longest Yard Sale”: NBC Nightly News with Lester Holt followed my wife and I on our annual vacation to the 127 Yard Sale. This segment aired on the same night as…

“Documenting Hate: Charlottesville”: …my appearance on Frontline in an excellent documentary about the new neo-Nazi movement. Antiquing one day, fighting alt-losers another—it’s a living!

“The Fetish of Authenticity ~ Gustavo Arellano on the Perils of ‘Cultural Appropriation’”: L.A. Taco remixes my Reason TV interview on the passing of Jonathan Gold.

“Trump’s new plan targeting legal immigrants is proof that the immigration debate is about race, not law”: In which I tell NBC News THINK readers the obvious—but sometimes, we must emphasize the obvious. KEY QUOTE: “Immigration activists are rightfully freaking out, but they shouldn’t be surprised: Throughout the entirety of American history, the majority of anti-immigrant actions and sentiments have been directed at legal immigrants.”

“Put up or Shut Up”: My latest KCRW-FM 89.9 “Orange County Line” commentary talks about the open sore that is South OC refusing to help the homeless, and the federal judge who’s ready to declare Armageddon on them.