What a bittersweet week. It started with the unexpected death of Los Angeles Times food critic Jonathan Gold from pancreatic cancer just hours after you and I last connected, and ended with his funeral yesterday, of which I was honored to have attended. The sadness of his passing is outweighed only by being able to see the worldwide outpouring of love for someone who’ll go down as the greatest Southern Californians of them all (move aside, Angelyne).

I don’t deal well with death, only because I’ve been extraordinarily blessed with healthy family and friends—I have a 95-year-old grandma who still makes me gorditas by hand every time I visit her in Montebello, gracias a Dios. But I finally realized yesterday, as I drove up the 101 to Mr. Gold’s morning service, when you’re truly an adult: when you’re driving people older than you to the funerals of people close to ustedes.

Mr. Gold’s memorial was only the second non-Catholic funeral I had ever attended—hey, I’m a kid descended from rancho folks, ok? A Reform Jewish rabbi served more as an emcee than officiant, as Mr. Gold’s friends and family offered laughter, tears, and wisdom through their eulogies. Very little ritual, and it ended with Dr. Dre’s “Ain’t Nuthin’ But a G Thang”—BOOM.

But the rabbi was wonderful, and said something I’m sure I’ve heard before but rang truer than ever yesterday:

May your memory be a blessing.

Legacy is a lot like journalism: you can do everything in your power to get noticed, but it’s ultimately up to the Fates. One of my favorite poems is Shelley’s “Ozymandias,” because it’s exactly about that. A cruel emperor erects a magnificent statue of himself, which a traveler finds centuries later as shattered ruins in the desert.

So all you can do is live your best life and hope people think you were cool. More importantly, that people think about you.

I’ve thought about legacy a lot in this past year of wilderness for me, as heroes of mine have passed. Few of us ever have the time to try and construct a memory that will remain not only beyond our lives, but also that of our family, and their descendants. Its breaks my heart to see the old Jewish and Serbian cemeteries in East Los Angeles, forgotten and derelict and with the names of regular people who don’t even have a person left on this earth that cares.

Another cliché of eulogy-speak: They say you die twice. Once, when you pass. And another time when someone says your name for the last time.

Heavy stuff, right? But whenever I get those existential moments, I remember another favorite poem of mine: Dylan Thomas’ “Do Not Go Gentle into That Good Night.” I first read it my senior year in Miss Sinatra’s honors English class at Anaheim High School. For two decades, I remained ticked that she gave me a bad grade for my interpretation of the poem then: about a son who was sad that his father was about to die. 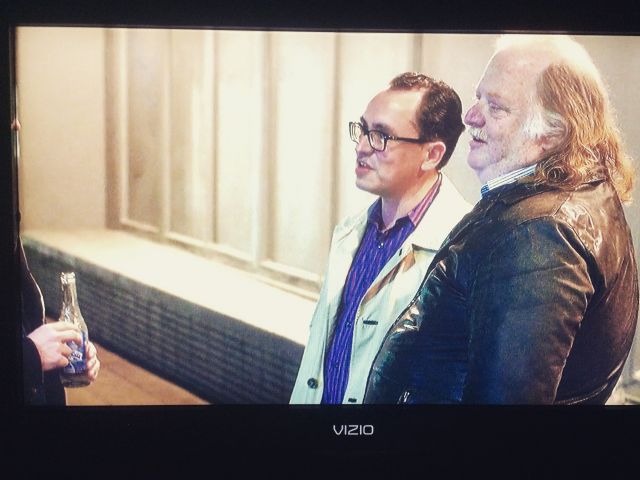 Mr. Gold and I in the tacos episode of Ugly Delicious
I deserved that bad grade. Now, with age, I realize that Thomas was exhorting us all to fight until the end, however we live our life.

On Monday, I emailed back and forth with my dear friend Evan Kleiman, host of KCRW-FM 89.9’s Good Food, where Mr. Gold was a weekly guest for 20-plus years. She was busy putting together a special episode all about his life. I asked how she was—sad, like all of us.

But Evan also said something to the effect that the only thing she could do right now to fight the tears is to record her program.

I covered Mr. Gold’s funeral yesterday—that was what I had to do.

Rage, rage against the dying of the light. And live so that your memory be a blessing.

LISTENING: “Los Tamales,” Banda Costado. Mr. Gold famously wrote magnificent stories about N.W.A., Snoop Dogg, and Dr. Dre back in the day, and his back-and-forth with fans about music was always a delight. I wrote a listicle about the best tamales songs EVER in 2013, and I remember Mr. Gold praising it. Here’s one of the tracks I cited—a catchy banda oaxaqueña ditty celebrating the tamaleros of Los Angeles.

READING: “Who Are the ‘Real L.A.’ Soccer Fans? ~ A Look At the Growing Rivalry of Galaxy vs. LAFC”: On Thursday, I randomly stumbled upon ESPN’s broadcast of the above MLS game and saw a thriller but wondered about each team’s fan base (I have friends in both). And lo and behold, L.A. Taco published this. Another reason to follow this publication for which I’m honored to serve as senior contributor.

“Jonathan Gold Might’ve Been the Belly of LA, But He Also Found Restaurant Religion in Orange County”: My continued effort to make my own publication a thing continues with how Mr. Gold called the new OC way before anyone else through his food reviews, and how he increasingly saw us as being part of the Southern California vanguard. KEY QUOTE: “Imagine that: Mr. Gold picked a Mexican. From OC. As his best restaurateur in Southern California. In the era of Trump.”

A lot of cameos due to the passing of Mr. Gold, from NPR’s All Things Considered to my old stomping grounds at AirTalk on KPCC-FM 89.3 to shoutouts in the New York Times to CNN’s “Reliable Sources newsletter” to progressive legend Harold Meyerson in LA Observed putting me in the same category of Southern California chronicler as Mike Davis, F. Scott Fitzgerald, Nathaniel West, Raymond Chandler AND John Fante—HWUT.

“LA Taco bears news of an evolving city”: In which the Columbia Journalism Review speaks of my homie Daniel Hernandez’s effort for TRUE independent journalism in Southern California, and asks me for a quote.

“So much more than tacos: San Bernardino’s Mitla Cafe”: This story originally appeared in January, but I just became aware of it this week. My Taco USA: How Mexican Food Conquered America is cited as bringing to popular attention the oldest Mexican restaurant in the Inland Empire.

“Chef Ashley Christensen, NC restaurants in spotlight, thanks to Time’s ‘South Issue’”: The Raleigh News & Observer gives me a shoutout for a story I did for Time, which I link to below…

“We all live in Jonathan Gold’s Southern California”: A special version of my California columna for the Los Angeles Times in which I argue Mr. Gold was bigger than food criticism, as important as that was. KEY QUOTE: “He deserves a spot in the pantheon of Los Angeles writers, alongside Charles Bukowski, Walter Mosley and Luis J. Rodriguez. His columns have the same defining importance about our time and place as Joan Didion’s dispatches, as “The Day of the Locust.”

“One Chef’s Day: What It Was like to Cater at Jonathan Gold’s Family Farewell”: My attempt at Jimmy Breslin-with-JFK’s-gravedigger journalism, as I hung out with Burritos La Palma, which made one of Mr. Gold’s favorite burritos. KEY QUOTE: “We did good today,” Albert said afterward. “To witness the gathering of so many people, who’s lives were impacted by his love of food and the city of Los Angeles, was truly moving. And to feed them? It really was an honor.””

“What Jonathan Gold Meant to Home Cooks (in Los Angeles and Beyond)”: In which I talk about Gold’s influence in promoting food beyond just restaurants. KEY QUOTE: “His eternal plugs for ethnic markets and products encouraged faithful followers to try their hand at these dishes in their own kitchens. Not only were these cuisines approachable, he’d argue, but their ingredients were also readily available — if only you looked for them.”

“Let noncitizens vote. What’s the worst that could happen?”: Lot of people TRIGGERED over my most recent California columna for the Times haha. KEY QUOTE: “How is it just that an adult who’s lived in El Monte for more than two decades has less of a say in California politics than a native New Yorker who’s lived in Highland Park for less than a year only because the latter is a citizen and the former isn’t?”

“How Southern Food Has Finally Embraced Its Multicultural Soul”: My inaugural story for Time—TIME PINCHE MAGAZINE—talks about the changing foodways of the Nuevo Sur. KEY QUOTE: “Immigrants are adding to what the South is,” says Jose and Sons chef Oscar Diaz. “There’s this beautiful painting, and we’re adding more beautiful colors. Because it’s not a finished piece.”