I always liked Peanuts as a kid. I liked the animated specials better. But I never cared to see or hear You’re a Good Man, Charlie Brown, the 1960s musical based on the comic strip.

I guess I was always more of an Oklahoma! type of guy, you know?

Nevertheless, I’ve taken to say the title to people who I feel don’t know their own brilliance. Maybe I’m using “You’re a good man, Charlie Brown” completely out of context; I don’t care.

I view it as an affirmation of unsung quality, and I always saw ol’ Chuck as a fundamentally good guy criminally underappreciated by those around him, yet someone who fought on, damn that yanked football or clothes-taking home run. 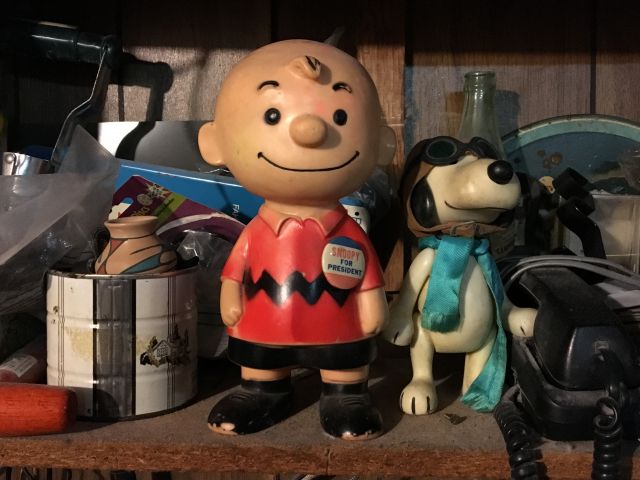 OLD SKOOL statues courtesy of my best friend Art. Photo by Theresa—CONGRATS!!!
Which leads me to Joe Donnelly.

He’s currently a visiting assistant professor of journalism at Whittier College, and just came out with a new book: L.A. Man: Profiles from a Big City and a Small World, a collection of his writings over the years for publications as diverse as Surfer’s Journal, Los Angeles Times, Washington Post, and LA Weekly, where he served as deputy editor during one of the alt-weekly’s many glory eras.

Joe is a fabulous writer—L.A. Man has his longforms on Wes Anderson, California wolves (both of the canine and Hollywood variety), Latino surfers, and more, all wonderful insights into this crazy, galactic SoCal of ours.

But he’s an even better editor. He co-edited Slake, a much-missed literary journal of Los Angeles and ran Mission & State, a nonprofit news agency out of Santa Barbara that ended far too soon. People who worked reguglarly with him describe Joe as tough but kind, someone who hammers pyrite into Mjolnir.

But more importantly to me, Joe is a man of honor—because he refused to be my editor.

In 2007, the hated alt-weekly in Southern California was OC Weekly. Three-quarters of the staff had resigned, refusing to work under what they perceived to be a conservative ownership who would dictate coverage and destroy a progressive beacon.

Only five of us longtimers were left, charged with putting together a paper we refused to leave because we believed we could save it. We were mocked for doing so, by former readers and colleagues alike.

Into this “cauldron of chaos**” came Joe. OC and LA Weekly shared the same corporate owners, so he was commanded to serve as interim editor until they found a permanent one.

Us remaining staff writers liked Joe and treated him with the respect he deserve. Joe did the same, even as we sensed he felt out of place—an L.A. man in nasty, nasty O.C.

He edited one story of mine—a profile on legendary baseball scout (and La Habra boy) Jesse Flores. And that was it. His reign was about three weeks. One day, Joe didn’t return, and a permanent guy was put in place.

We heard the news: Joe was offered the OC Weekly editor’s chair, and he refused it. He didn’t feel it was right to impose an outsider on such a close newsroom, and he wouldn’t be that guy.

Giving up a chance to head your own newspaper because you knew the people you would be in charge of were wronged? THAT is honor.

Joe earned our undying respect—and became persona non grata to corporate, who pushed him out within a year.

Buy, por favor
I didn’t get to tell him all of this until just a couple of weeks ago. He reached out shortly after I left the Weekly for lunch at my wifey’s restaurant in SanTana. We had emailed every once in a while in the past—one time, I gave a pep talk to one of his Whittier College students that Joe really appreciated.

We have struck up a friendship in the past couple of months. Wonderful conversations about the sad state of journalism in Southern California (and how we might solve it), about our great wives, about good food. Which leads me to Charlie Brown.

When Joe told me he was publishing L.A. Man, he asked how he could promote the book. He also confessed he felt guilty for even entertaining the thought—the product, he said, of his Irish Catholicism (that’s why everyone should be a MexicanCatholic—we just feel shame, then more shame after we do what we said we weren’t going to do).

And that’s when I remembered my saying: “You’re a good man, Charlie Brown.”

You’re a good man, Joe Donnelly. No shame in the self-promotion game, especially when you have talent as awesome as yours. But if you won’t bang your own drum, I will for you—and so will others. Because you’re a man of honor. And a hell of a writer.

And, for the record, Joe wants the world to know he always identified more with Snoopy—BOOM.

*Last week, I incorrectly noted it was my sixth newsletter; it was my seventh. Time flies when you’re writing fun!
**Pithy quote lovingly stolen from Dennis Romero

Listening: “Sonora y Sus Ojos Negros, Miguel y Miguel.” Because Javier Cabral requested it haha. But I’ve always loved this song, both for its sierreño twangs but because it’s an innocent love song with shoutouts to Sonora’s cities. Who wants to pay me to write a listicle about the best songs about Mexican states?

Reading: “The Silent Season of a Hero”: I mentioned this Gay Talese classic on the Yankee Clipper my intro-to-journalism class at Orange Coast College as a grand example of a personality profile. I still maintain it’s better than “Frank Sinatra has a Cold.” Few of my students knew who Jo DiMaggio was—it happens!

The Splendid Table: I appeared on the long-running food to talk flour tortillas. Currently eating some from El Paso! 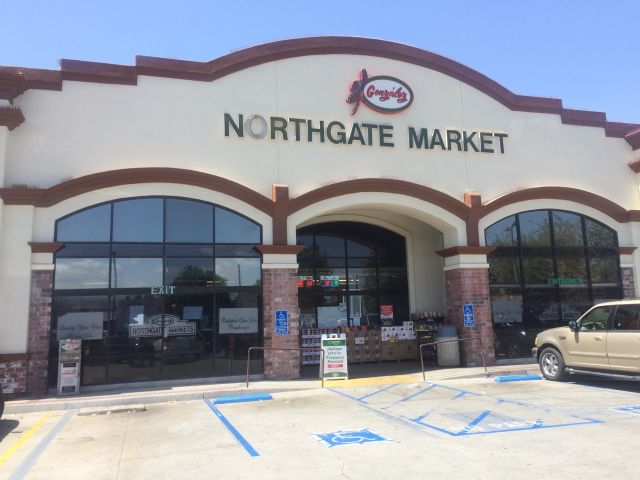 A Northgate in SanTana
Coachella Makes Millions, but the Festival’s Impoverished Mexican Neighbors See Very Little of It: My latest California columna for the Los Angeles Timesremembers a long-ago trip to Coachella with the homie profe Carolina Sarmiento to remark about the dissonance between the festival and the Valley around it. KEY QUOTE: “The [Coachella poster] has become as much a part of Southern California pop art as those 1930s and 1940s orange-crate labels depicting pastoral scenes of plenty. Both images are a fusion of fantasy and propaganda. And in both, just out of frame, are exploited Mexicans.”

The Northgate Grocery Chain Loses Its Matriarch — Teresa Reynoso de Gonzalez, 90: My latest for L.A. Taco is an obituary of the woman who helped to start Northgate Gonzalez Market and, by default, the Latino supermarket genre in the United States. KEY QUOTE: “Northgate González was at the forefront of a wave of Latino supermarket chains that  spread across Southern California during the 1980s, nearly all run by immigrants from Jalisco.”

Will 2018 be the OC GOP’s Waterloo? My weekly KCRW-FM 89.9 “Orange County Line” commentary tackles the Orange County Republican Party’s ever-weakening grasp on power. Somewhere, Ronald Reagan is rolling over in his grave…right above Richard Nixon.

These California Kids Got In Trouble for Playing La Migra, a Game Where ‘Border Agents’ Chase ‘Illegal Immigrants’: My latest Reason piece, in which I defend the high schoolers in Benicia for playing La Migra, a game I played as a second-grader at Thomas Jefferson Elementary in Anacrime about 32 years ago. KEY QUOTE: “It’s preposterous to legislate away a game that children have played for decades and that harms only the klutzes who fall down in the chase. And it’s even more preposterous that the Debbie Downers in Benicia won. Earlier this week, the kids announced that their game is now called “Extreme Fun Run.” Who the hell wants to play THAT?:”

A Visit to LA Weekly, the Most Turbulent Newsroom in America My first piece for Columbia Journalism Review, in which I visit old enemies to write how SoCal’s current most-hated alt-weekly is faring against a boycott and pendejo owners. KEY QUOTE: “They want to destroy it and only save it on their terms,” says a staffer from the 2000s who currently contributes and requests anonymity. “You’re discounting all the people who remained, who’ve been here four times longer than some of the boycotters.”