Greetings from Manhattan, where another successful James Beard Journalism Awards happened last night. I didn’t win, or even get nominated, but better: I serve on the Journalism Committee. I help to steward the most important food-journalism prizes in American letters.

Not only did they know who I was, but they said they were fans of me.

By Anthony Quintano (Flickr) [CC BY 2.0], via Wikimedia Commons

I remember my first Gotham adventure well: February, 2006, just a couple of weeks after turning 27. I let an Irish-American porter cart my checked-in bags to a taxi, which I had never been in. I saw snow in person for the first time in my life.

NBC had flown me out so I could appear on the Saturday version of Today. They had just filmed a segment in SanTana on me regarding my former columna, and now wanted me to be live with Lester Holt—yeah, networks had money then.

After the taping, I met the man who’d be my agent. During breakfast, we hammered out a plan that I followed pretty good: a book that would be a best-seller (a collection of my former columna) and a book whose legacy would go on for years (Orange County: A Personal History).

That weekend set the course for the rest of my life. 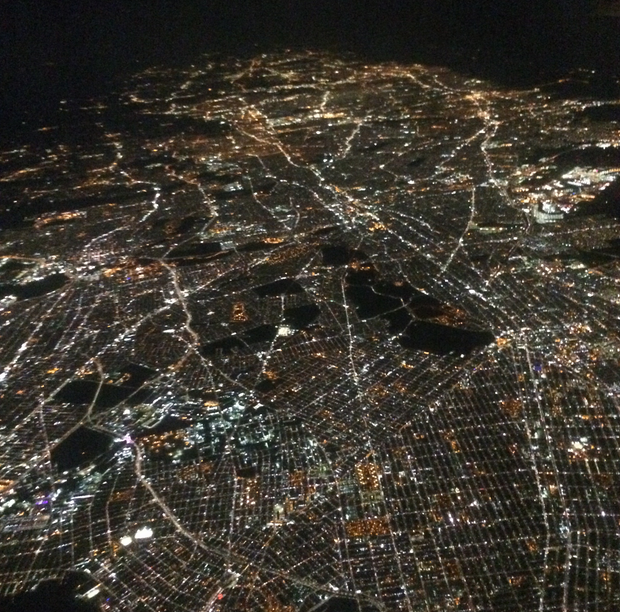 Manhattan City Lights, from the Jet Blue direct flight from Long Beach to JFK
How the hell did I get here?There’s apparently a phenomenon among people of color called “imposter syndrome,” in which people who are in positions of privilege they never imagined frequently doubt that they belong.

It’s a bad thing to have, because imposter syndrome usually wears down anyone who has it, and leads to their ultimate demise—a self-fulfilling prophecy.

I say “apparently,” because I don’t suffer from it. I might question how the hell I’ve advanced so far in my career—but I’ve never doubted that I deserve it, and I don’t let that doubt get to me.

I can’t remember where, but I recently overheard younger PoC talk about imposter syndrome. So I, the old in the group, butted in and told them my story.

The career I had was never in my stars, I told them. I’m the child of immigrants who never went past ninth grade. I barely graduated from high school. I had no formal training as a reporter.

Hell, the only ethnic food I ate until I was 21 was pizza, teriyaki bowls, and sopa maruchana.

And here I am, at the Beards. There I was, sharing drinks with media mogul William Randolph Hearst III the other weekend at the Los Angeles Times Festival of Books. Soon, I’ll be hanging out with Hollywood executives for major studios.

I travel so much that I’ve mastered the red-eye and 6 a.m. flight. I get published in magazines that I never imagined would hear a pitch from me, let alone ride me to viral success.

I deserve none of this, I told the youngsters: I’m just a simple wab from Anacrime.

And that’s why I deserve it. Because I’ve never let the incongruity of my situation ever get to me.

Don’t feel bad that you’ve made it, I concluded to the youngsters. See it as a privilege. And when that doubt creeps in again, shut it the hell up.

Easy: I worked my ass off—and if I can do it, anyone can.

Listening: “I’ve Got a Feeling,” the Beatles: Back when iPods were a thing, I’d always play this song as I walked to my Manhattan meetings—make what you will of it, but I always loved this song because it showed the McCartney and Lennon at their hopeful/cynical best.

Reading: “The Teenage Whaler’s Tale,” High Country News: This story won the James Beard Award last night for Foodways, and for good reason: It’s a spectacular, infuriating tale of an Alaskan indigenous youth who partook in a traditional whaling excursion only to get death threats whipped up by some stupid liberal gabacho.

“Coachella As ‘Fantasy Island?’” I got interviewed by Phoenix NPR station KJZZ about my Los Angeles Times article last week regarding how clueless the Coachella Festival’s concertgoers are about the area around them.

“South County Tries to Solve OC’s Homeless Problem”: My latest KCRW-FM 89.9 ridicules South County, for reasons I explain in the next article…

South O.C.’s solution to homelessness is class warfare at its NIMBYest: My latest California columna for the Los Angeles Times blasts the wealthier part of Orange County for its utter hatred of the rest of us over homelessness by wanting to house them in Silverado Canyon. KEY QUOTE: “The rest of O.C. collectively groaned. South County still doesn’t get it, and doesn’t even pretend to care.”

Is Taco Maria California’s Most Important Restaurant?: My first article for Alta: Journal of Alta California, a new literary magazine that’s awesome and to which you should subscribe. For my debut, I wrote about an old favorite: The James Beard-nominated Taco Maria in Costa Mesa. KEY QUOTE: “Taco Maria is California’s most important restaurant right now because it offers our past, present and future in each thoughtful course and decadent bite.”

How to Teach Students Spanish Using Tacos and Pupusas ~ Meet Professor Sarah Portnoy: My latest for L.A. Taco is an interview with a USC professor who makes her Spanish students do restaurant reviews and profiles to teach them about Latino culture in El Lay. KEY QUOTE: “For them, this can be much more accessible than say, Don Quijote.”

You made it this far down? Gracias! Follow me on Twitter, Facebook, and Instagram while you’re down here. Buy me a Paypal taco here. Until next week! And don’t forget to forward this newsletter to your compadres y comadres!