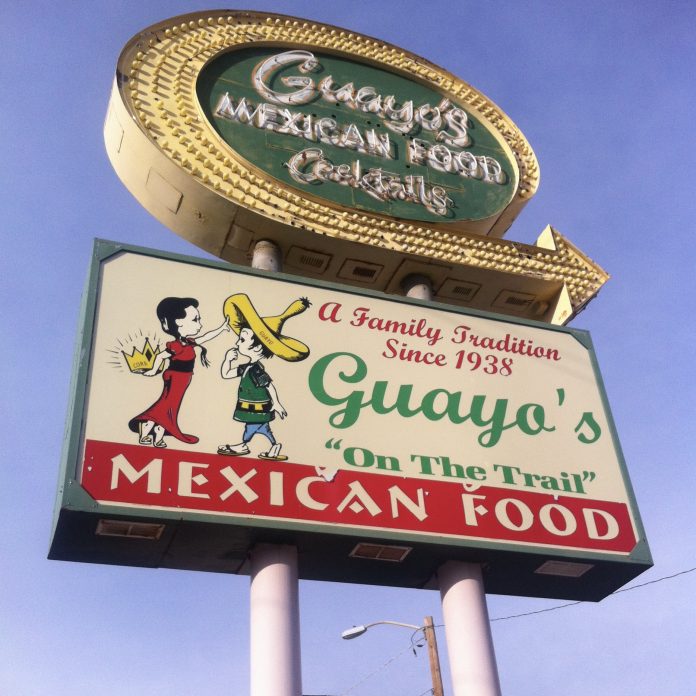 It was a gimme, he told me. A guarantee. We had it.

I was going to get a TV show made on my 2012 somewhat-read book Taco USA: How Mexican Food Conquered America.

He was a longtime Hollywood person — not an A-lister, but you’ve probably seen some of his stuff and definitely heard of his productions. Big fan of my stuff. I had appeared on something, and he liked my presentation, my delivery, my anything.

He had an overall deal with BIGTIME STUDIO, and wanted to transform my book on Mexican food into a road show — part Parts Unknown, part Huell Howser, part True South.

He bought into my vision, and I into his. Over a series of lunches, drinks, phone calls and the like, we hammered out a proposal that his bosses liked, and for which we got the blessing to pitch around town.

Our first stop: STREAMER, the most obvious place for a project like this.

The exec with my producer’s studio met us in STREAMER’S lobby, and we were escorted to a meeting room where we were to pitch.

The way that pitches work in Hollywood, the studio exec opens the conversation with his fellow studio exec saying how excited they are about the project that’s about to get pitched, but especially the people making it. They then introduce the producer or showrunner, who says how they’ve done all shows in the past but this one, THIS ONE that they’re about to pitch is THE ONE, and it’s all because of the talented person whose idea this show is.

That’s when the creator gets to pitch.

I do have the ability to sell it in the room — okay, it only happened once, but some longtimers never have, so advantage, me, as I began my Taco USA pitch for STREAMER.

I was like Kobe with a basketball. Beethoven with his baton when he debuted the Ninth. Moxley among a bunch of loser Republicans. My team was ecstatic, the STREAMER executive became intrigued more and more. I was 15 minutes in, and about to go for the win.

STREAMER executive #2 came in late. They looked familiar. They sat down, the executive said their name, and my heart sank.

We weren’t going to get a show.

About a year earlier, the STREAMER executive #2 had reached out to me via Facebook. They worked for MEDIA COMPANY then, which  was going to do a documentary, and they asked me if I knew anyone who might serve as a host. The only qualification was that the host had to be under 35.

When I saw STREAMER executive #2’s message, I seethed . And I responded. I told them I knew two perfect candidate. One of them was my friend, whom their MEDIA COMPANY had just laid off. The other one was me, but I was over 35.

So fuck you, I told them. No, seriously: I used that phrase. Fuck you.

Now, STREAMER exec #2 was in the room while I finished my Taco USA pitch.

I panicked for like a second. And then I said, fuck it.

It was one of the best performances of my life. They never once looked up from his phone.

Afterward, my producer and his studio exec slapped my back and shook my hand and said they had never seen a pitch like mine. It was a guarantee, they said. I didn’t have the heart to tell them about my previous encounter with STREAMER exec #2, who came in late.

STREAMER called my producer two days later. They were going to pass. A show about Mexican food in the United States was “too narrow” an idea for them.

Then I told my producer about the real reason why. He gasped. It all made sense now. He could not understand how on Earth STREAMER had passed on our project. Now he got it. He said he wished I hadn’t told off STREAMER exec #2 so long ago, but respected that I had told him off.

All these years later, I don’t regret a single thing. That STREAMER exec #2 deserved to be told they was wrong for being ageist and stupid. And I wasn’t going to give up even after I knew I had no chance.

What, give up? Never. Even if you’re going to lose, you go down with pride in what you do. There is no shame in losing, only in not giving it your all ALWAYS.

My producer and I went on to pitch the Taco USA idea to multiple other channels and platforms. All passed.

Every family says theirs makes the “best“ tamales. My mother’s were also the best. Since there is no Mom anymore, other than making them, if you had to buy tamales, do you have a local go-to store? La Poblanita in Orange are very decent, as noted in your column years back. They were sold out X-Mas week , so we bought at Fiesta Imperial Market in Placentia. Gracias!?

I don’t buy tamales unless they’re ones I can’t get from my family. So Oaxacan tamales, I get from Guelaguetza in L.A.. Huchepos from Michoacán? Las Brisas de Apatzingan in SanTana, one of the few Tierra Caliente-style restaurants in Southern California. Paches? You tell me where to get them — haven’t been able to find the Guatemalan potato tamales in OC in YEARS…

IMAGE OF THE WEEK: Hook staring down that rainbow bridge we all gotta take one day…

QUOTE OF THE WEEK: “If you do not share your wealth with the poor, they will share their poverty with you.”

LISTENING:“I Want to Go Back to the Mountains,” Don Reno. The “Canción Mixteca” of bluegrass, by one of the founding fathers of the genre. Next time you hear someone say it was better in the good ol’ days, tell them that’s what they said in the good ol’ days. Doesn’t make this song any more saudade, though…

READING: “Hot Dogs”: Old London Review of Books review from the early 1990s on books about American evangelical Christianity that nowadays reads like prophecy about the U.S. that we live in.

SHOUTOUT TO: Anonymous, who kindly donated 100 tacos to sponsor TWO full month of MailChango! No plugs to give!

Wed., Feb. 1, 12:30 PM PT: “The Gentrification of Psychedelics.” I’ll be in Zoom conversation with the homie Roberto Lovato about his incredible article for Alta about the subject at hand. Conversation is FREE, but you gotta register beforehand!

“Essential California: Student activists fight for more COVID-19 safety measures at school”: One LA Times newsletter you should subscribe to plugs a columna of mine.

“Citric Acid is the new literary journal coming out of Orange County”: A rare nice word for me in the Orange County Register.

““People’s Guide” a narrow light”: Some praise for my new.

“The Laguna Hills/Portola Basketball Games Presents a Chance for a Wider Discussion About Racism”: A website that has long trashed me admits my most recent L.A. Times columna was “decent.”

Latest roster of episodes for “The Times: Daily news from the L.A. Times,” the podcast that I host. Listen to them, and SUBSCRIBE. Don’t let me become the Poochie of podcasts!

“An Indigenous language, back from the brink”: The Serranos of the Inland Empire make it happen.

“A new Honduras president-elect is set to make herstory”: Xiomara Castro has a lot of work to do.

“A comic and COVID walk into a cruise ship …”: You couldn’t pay me to get on one in the Before Times.

“The Omicron kids”: High schoolers fighting back against PANDEJOS.

“The Blur guy insulted a pop star. The reaction? Swift”: They edited out my WOO-HOO, but whatever.

“Pulling Back the Orange Curtain: The Authors of A People’s Guide to Orange County Reflect on Their Process”: I and my fellow co-writers on our latest book talk about it.

“A People’s Guide to Orange County”: An excerpt from our new book.

“Gary and Shannon”: The KFI show talked about my Todd Spitzer columna on Jan. 17.

“Racism in O.C. schools is nothing new — but it’s surprisingly diverse”: My latest Los Angeles Times columna talks about a racist incident that happened in OC — surprise, surprise. KEY QUOTE: “These episodes write themselves, like some bigoted “Mad Libs” game. Just leave blanks for the school, the year and the group targeted.”