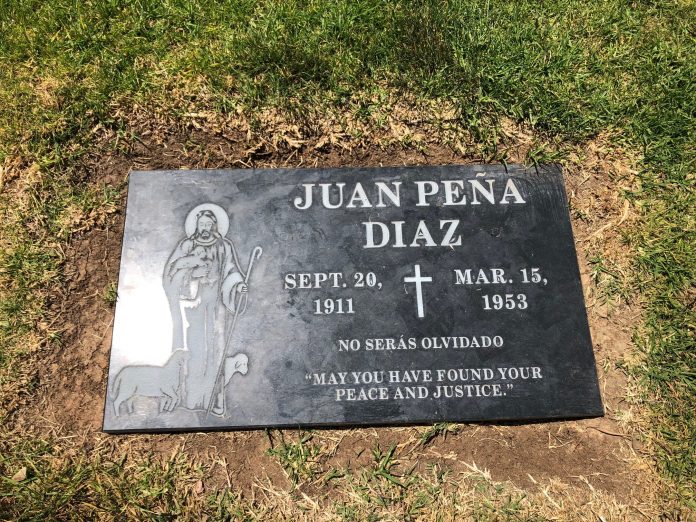 Scroll down a bit, and you’ll see the headstone of Juan Peña Diaz, the subject matter for my latest story for Alta, where I’m a contributing editor. Here’s a link, so go read it.

All I’ll say here is that Juan was an undocumented Mexican immigrant killed in cold blood by an Anaheim police officer in an orange grove — and it’s one of the craziest stories I’ve ever covered.

You’re not gonna click the link, are you? Here’s a little bit more to entice you: Juan was buried in an unmarked grave. No one gave a shit when he died — not Latino activists, not his brother, a Mexican-American civil rights activist at the time.

And definitely not Juan’s grandnephew, who wouldn’t give me a comment about this tragedy — maybe because he rails against illegal immigration? I don’t know. Frankly, I don’t care.

Actually, I do care.

That’s why I wrote the piece. That’s why I gave it as outrageous a headline as mainstream media will allow today: “The Tomb of the Unknown ‘Wetback’.”

You’ll have to read the story to realize why the inclusion of that ugly word was not only justified, but necessary.

It’s one of the most personal articles I’ve ever written, which you’ll learn quick if you read the damn story already!

And not just because the story involves me.

But because I was able to do my favorite type of journalism.

As far back I can remember, I’ve always wanted to be history.

The book in my collection I’ve owned the longest is Volume A of The New Book of Knowledge, which mi Tia Licha gave me when I was 8. When I grew up, I promised myself, I would become important enough to get into those history books.

Because that would’ve meant my story mattered.

I still believe in the Great Man Theory of history – that certain individuals can become so important that they alone move the world. But in college, I learned a word that remains one of my favorites: subaltern. “From below.”

As in, things that supposedly don’t matter.

In my college classes, the term was affixed to history—to People’s History, if you will. That the story of the faceless masses mattered.

The idea rang with me, because I was living it in Anaheim. I knew that my Papa Je (my maternal abuelito) packed oranges in a packing house everyone said was historic, and that my mami packed tomatoes for Hunt’s, which was an important company.

So why didn’t anyone outside of our family want to know about their stories?

History happens largely by people whose names never get into the books. And you know why? Racism and class have something to do with it, but the bigger reason is because historians and chroniclers have long been too lazy in the past to find those stories, especially of the local variety.

The story I always use to prove that fact: many of the SanTana history books out there talk about some white guy who had a distinctive laugh — seriously. Nearly none talk about the Mexicans in the Golden City.

They want all of the easy stories, and none of the hard.

It took me a while, but once I started doing historical journalism, I never looked back. I excavated metaphorical graves and wrote “normal” people into the history of Orange County. People long neglected by OC’s historical poobahs.

Turns out those “normal” people were far more interesting than the “pioneers.”

Naranjeros who went on strike against the lords of Orange County during the Great Depression. People who lost their lives in the Great Flood of 1938. An entire community of Mexicans — over 400 men, women, and children — deported from the Bastanchury Ranch in Fullerton.

It’s never been about me. It’s always been about having the public say the names of people long forgotten. People who mattered.

No story better exemplifies why I do that type of journalism more than my Alta piece. So say his name: Juan Peña Diaz. A martyr for the many sins of OC. But now, not forgotten.

Now, read my story, already!!! But not for me; to give witness to Juan, and all the others like him. No serán olvidados.

This is the feature where I take your questions about ANYTHING. And away we go…but first off, gracias to all of ustedes who heeded my call last week and sent me a chingo of preguntas. We should be good for a while, but I’m always looking for great queries like this one…

Can I use backyard lemons in place of lime in homemade salsa. We are lucky to live near many Mission markets in SF, and I have used made batches of both red and green salsa subbing the lemon, after roasting nearly all the ingredients. Not sure if we are liking the results or not…Asking for general reaction.

What matters is if YOU like it — and if you’re not liking it, I’d go with the limes. In general, I always go with limes over lemons for Mexican food to the point I eschew the latter when they replace the former at taco trucks every spring. Limes have a brighter flavor than lemons that brings out the flavors in Mexican food, especially.

But who am I to say what works and what doesn’t in food? As Keto Mexican Recipes would say, “If it’s good, why not?”

IMAGE OF THE WEEK: Great vegan tacos at Just Vegana in Pomona — the chorizo is best! What was I doing in Pomona? Details to come…

LISTENING: “La Sinfonola,” Los Dos Reales. The duo is a SEVERELY underrated group, with wonderful harmonies and songs largely forgotten today, which is a damn shame. Like this one, a ditty about a guy who gets drunk over a girl, and is petrified about that fact!

READING: “They Like That Soft Bread”: People around Knoxville, Tennessee like their submarine sandwiches steamed — HWUT. This story in the ever-excellent Bitter Southerner uses this regional preference to spin a gorgeous tale about memory, geography, immigration, food and this gem of a line: “David has an East Tennessee accent like cane syrup, lithe and fast-moving but indulgent”

“Review: With L.A.-inspired street food, Supremo Taco is a game-changer”: the Atlanta Journal-Constitution calls me a “taco geek” in a restaurant review. Good for them!

“Alta Podcast”: Alta does a short interview with me about my piece for them.

“The Tomb of the Unknown ‘Wetback’”: One more time, with feeling. Not going to give a key quote, because you read it already!

“While Women’s March unfolds, L.A. Archdiocese holds its own social justice gathering”: Quick dispatch for LA Times about a Catholic event. KEY QUOTE: “Officially put on by the Archdiocese’s Office of Life, Justice, and Peace, a representative said the fact it’s been held on the same date as the Women’s March for the past three years was a complete coincidence, noting OneLife LA is two years older.”

“‘Kiwi Queen’ Frieda Caplan, produce-industry pioneer, dies at 96”: I assist in an obit about a legendary woman who changed the way America ate. KEY QUOTE: “In heels and a skirt, she revolutionized the way the produce world did business, adding recipes and cooking instructions on packages of “exotic” produce to tame the distrust of an unsuspecting public.”