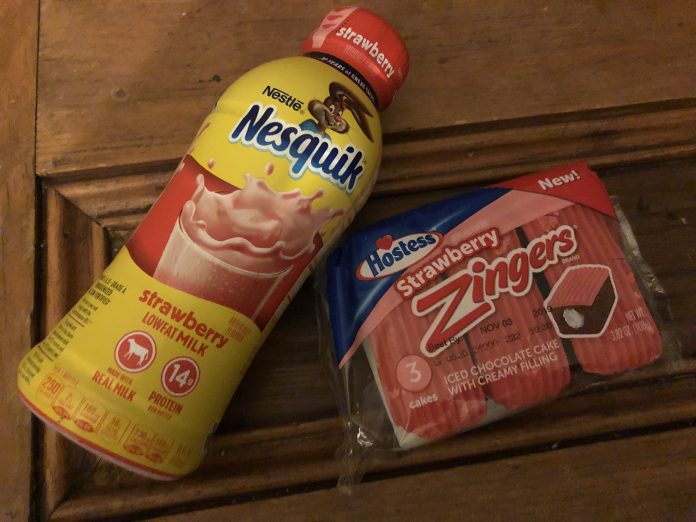 Earlier this week, to celebrate the release of my Los Angeles Times podcast on the 25th anniversary of Proposition 187 (have you downloaded it yet and given it a 5-star review? Because you should—do your favorite Mexican with Glasses a favor, you know?), I did something I haven’t done in over a year – I rewarded myself for a job well done.

Some people go on vacations to treat themselves for big achievements; some people buy something fancy.

For me, it’s a bottle of strawberry Quik milk with some Zingers.

It’s a tradition I started about a decade ago, for reasons I can’t remember anymore except I REALLY like strawberry Quik and Zingers. So I only allow myself this tsunami of sugar whenever I feel I’ve accomplished something above and beyond my usual capabilities.

So I’ve maybe treated myself to this about five times.

I’m damn proud of everything that I do professionally. I’m not one of these people full of doubt and insecurities —I’m a firm believer in the Serenity Prayer, and so am brutally honest with myself at all times about my strengths (public speaking, writing and reporting, loyalty) and weaknesses (I usually paint my words with a spray gun instead of a fine brush; I STILL can’t throw a spiral all these years later).

But I never rest on cliched laurels. I don’t dwell on successes, real and perceived. Gotta be like a train: always move forward, never idle, and DEFINITELY don’t go in reverse.

So when I do something truly great, I reward myself.

Because rewarding yourself for a job well done is important.

And that’s why I barely do it: Perspective.

If you get to know me REALLY well, you’ll eventually tell me to lighten up.

Live a little! Have fun! Stop working so much! Why so serious?

Because the hustle never stops.

One of my favorite journalistic aphorisms is “You’re only as good as your last story.” The wokoso class nowadays interprets this as exploitation, but I don’t care. It’s the ultimate professional memento mori, a reminder that you, too, will fall from the heights you sometimes touch for a second.

I’m of the mindset that we live in a society where the everyone-gets-a-trophy mentality is ruinous and juvenile. But I don’t think it’s endemic to this generation. It’s an American condition — we just LOVE to be congratulated and feel good about ourselves just for the hell of it.

You should always be hungry for more. You should always work under the idea that you’ve got something to prove — not others, but yourself. Keep celebrating yourself as the most amazing whatever, and you’ll get lazy.

I’ve seen it happen many times before. So it’ll never happen to me.

I’ve always loved quotes, so collect them and put them on my FB page. One of the most recent ones came from a New Yorker Q & A with legendary basketball writer Jackie MacMullan. This passage sums up my approach to journalism and life:INTERVIEWER: At what point did you step back and say, you know what, I’m actually good at my job, I’m not going to get fired tomorrow.

THIS is what I’m talking about. No rest for the wicked, let alone the blessed — that’s what death is for.

So I enjoyed my strawberry Quik and Zingers immensely, because my Prop. 187 package for the Los Angeles Times is badass, and there are more stories to come. Do check them out. And hopefully, I can do something great enough to treat myself again in the future…

Which reminds me: I gotta pitch some ideas to my homie jefe. Because while my last story was great, what else do I have?

It pleases me to read that you don’t feel a journalism degree is necessary to become a reporter. I’m currently a student of philosophy at CSUF, but over the last year I have really come to appreciate journalism and understand its place in documenting the history and culture around us, especially as a young-ish Latino. I wonder what advice or guidance you have for a philosophy major who would like to become a journalist? The writing, I understand, has to come from ones own style, but what is a story? How do you find one and how do you make it? Where does one begin?

I’d tell you to take my Intro to Journalism class at Orange Coast College, where I have an entire lecture about what makes a story and a SEPARATE one about how to find them, but you’re already a Titan! The tl;dr version: if you think something’s a story, try to tell it to someone else in four sentences. If they’re not immediately hooked, it’s not a story. You find stories by throwing yourself to the world — not just searching online, but talking to people. And while I have no insight into the mind of a philosophy major, I can say that it’s a damn good degree to have if you want to be a reporter, because you already have an insight into the shitshow that is humanity. Pitch some ideas to the Daily Titan, y suerte!

IMAGE OF THE WEEK: An altar at my wife’s Alta Baja Market in SanTana to my dearly departed Mami and Marge, who left us just a week apart earlier this year. I miss them every day…

LISTENING: “Pachuco Bailarín,” Perez Prado. I did a small lecture at a Fashion Studies class at my alma mater, Chapman University, last week about the cultural history of the Zoot Suit, so OF COURSE I had to play this Perez Prado jam. Only older folks seem to play the Mexico-loving Cuban anymore, which is a damn shame: Chipsters should be blasting Prado instead of taking photos in wannabe cholo poses at Tropicalia smh

READING: “Volume 2, Issue 83: We Were Lucky”: This eulogy for the fabulous sports publication Deadspin was written by its founder, Will Leitch, whose newsletter was the final inspiration I needed to start my cantos. Everything he feels, I feel the same about my former job, except Leitch’s a bit more into the feels than I am haha.

“Estudiantes que vivieron los ‘walkouts’ contra la 187 cuentan cómo ese momento marcó su vida”: La Opinión interviews me about me not walking out against 187 while I was a sophomore at Anaheim High.

“Why The History Of The Taco Is Vital To The Current Food Conversation”: Me about the importance of masa to tacos for Uproxx.

“She Broke The Internet With Her Recipe Videos And Now This Abuelita Is Being Recognized By YouTube” Mitú takes a quote of mine about Vegan-Mex food for its article.

“This is California: The Battle of 187”: Here’s the podcast again — download and 5-star it, porfas!

“Prop. 187 forced a generation to put fear aside and fight. It transformed California, and me”: A big essay about how epic the 1994 ballot initiative was, not just in the Golden State but also my life. KEY QUOTE: “Back in the fall of 1994, my first brush with immigration politics came when I was walking home from Anaheim High School and a truckful of white teenage boys yelled at me “187! 187!”

“Prop. 187 timeline: The rise and fall of California’s anti-immigrant law”: The most comprehensive 187 timeline you’ll EVER read, complete with links to stories written by the Los Angeles Times back in the day. KEY QUOTE: “The rise of Proposition 187 in California recalls Ernest Hemingway’s oft-cited passage in The Sun Also Rises, about how the fortunes of the novel’s main characters changed — gradually, then suddenly.”

“In Salt Lake City, Luz Escamilla seeks to become the Utah capital’s first Latina mayor”: A quick LA Times story about SLC’s mayoral race, where the big issue is that a Mexican-immigrant mujer state senator is a … Mormon?! KEY QUOTE: “The mayoral election comes at a critical time for the city, capital of the fastest-growing state in the country, but a place where urban woes such as air quality, homelessness and rising home prices are flummoxing residents not accustomed to them.”