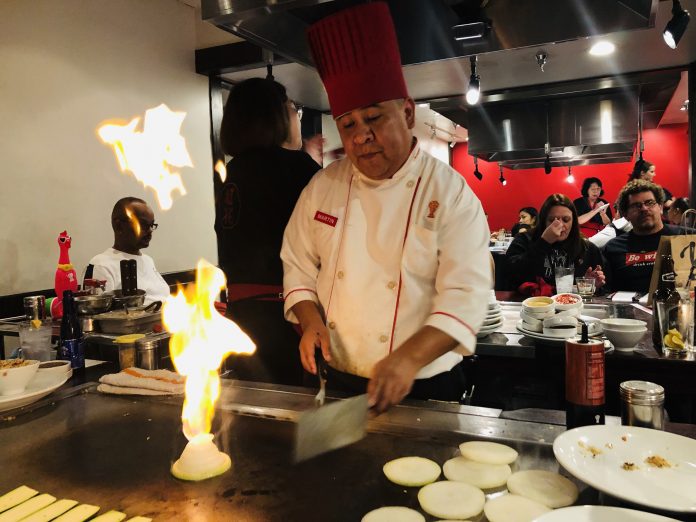 If you haven’t figured it out already, I’m the black sheep in the family.

My three siblings are in education, and transform the lives of kids all day, every day.

They live in Anaheim.

I moved to SanTana.

They’re middle-class Reagan Democrats who’ll never vote for Republicans because of the GOP’s addiction to xenophobia.

I’m a Marxist of the Groucho variety.

They vacation in Vegas and Havasu; I trek to Kentucky.

Most importantly, I was a food critic for 16 years. And they’re totally normal people who’d rather go to Panda Express instead of a Sichuan place I recommend, which always pissed me off.

And who LOVE Benihana.

My sister always celebrates her birthdays there, and I almost never go.

I don’t care for birthdays, for one. But I also always found her choice really basic. Benihana? A Japanese-American relic, in a county where ramen and soba and udon specialists reign?

The last time I went with them, I pouted and talked so much trash that I’m sure I was a nightmare to be with.

But my siblings still love me.

Instead of splitting off into anger because of our mami’s illness, we united like never before, promising never to let bullshit get in the way of us, because Mami prized family above everything else. We’re on a group text AND IG thread, and eat at my wife’s restaurant the last Sunday of the month, when the special is my mom’s pozole.

So this year, I made sure to go with them to Benihana.

And to be open to enjoying it.

On a recent weeknight, we went to the Benihana in Anaheim, right across from El Torito. “Two relics of 1970s American consumption,” I thought.

Then I shut up.

My family goes to Benihana so much that they know who the better chefs are. And we got a master in Martín, who did the shrimp-tail-in-chef’s hat thing, the flaming onion volcano, and all the Benihana tricks.

My siblings, nephew brother-in-law, and sister’s boyfriend (he’s passed most of my tests) all stared in awe.

It was a great time — a lot of food that made the high price ultimately worth it (leftovers for DAZE). Martín was a stud, and my yakitori was sweet and crunchy (although the white rice was dry and clumpy, and nowhere near as delicious as the fried rice, which Martín made to look like the face of Mickey Mouse!).

As we finished up, I looked around me, and saw a world I usually don’t inhabit: truly diverse in all aspects.

There were European tourists and African cab drivers and paisa families and sorority girls and white families and business people. I could spot the political tendencies of some based on their clothing, but no one cared. The Benihana crowd is the silent majority, the people who just want to live a good life and really don’t care for the latest trends or to demonize others and can live together and want to save up for a special night out with their loved ones.

It’s a natural human tendency to live in silos, among people who live, look, and think like us. And to look down upon those who ain’t us.

Learn from me: Don’t be a snob. And try something you look down on, if only to try and figure out why others may love it so much.

Because who knows? You might like it, too, once you scrape off all the bullshit in your biases.

I did. Benihana was awesome. I even bought a commemorative cup, and sipped a not-bad mai tai out of it.

Will I go as much as my family? Probably not. But at least I saw why they enjoyed it so much, and can now recommend a better teppanyaki experience.

Which they’ll ignore. Because I’m the black sheep of the family.

BTW, my sister’s boyfriend paid for a third of the meal, along with me and my brother-in-law. Another test passed, three more to go…

What are the best fruit/nut trees to grow in an LA/OC backyard? (Besides citrus). If you also want to throw in best vegetables to grow, greatly appreciate it.

Nectarines, plums, and apricots are great, but peaches are too mercurial for my taste. Papaya and mango and avocado, of course, although the latter are also temperamental. But go beyond the tried-and-true. I have a jackfruit, a Suriname cherry (or, as its known in its native Paraguay, ñangapirí), a Colombian tomate de árbol, and a guamuchil—all are healthy, and two of the four are fruiting!

As for veggies? You can grow most anything in SoCal, but I’ve always found great success with chiles, tomatoes, and eggplants. Tried beans this year, and got a great harvest. And beets grow year-round. But if you’re a Mexican without a cactus plant that gives tunas…you ain’t a Mexican.

IMAGE OF THE WEEK: Me interviewing former California governor Pete Wilson, about Proposition 187. THAT episode comes out THIS Tuesday, so subscribe to my podcast TODAY!

LISTENING: “The Glory of Love,” the Velvetones. Nowadays, the only place you regularly hear doo wop is on KPFK’s “Rhapsody in Black” or a Martin Scorcese film, and I was reminded of this great track because it’s on Casino. Always love songs with spoken-word segments, although never really cared for “The 10 Commandments of Love”…

“Weekly Wrap: DACA’s Legal Future, The Lasting Impact Of Prop 187, And Local Politics”: I came out on the great NPR show It’s Been a Minute with my LA Times colleague Cindy Carcamo — she to talk DACA, me to talk Prop. 187, we to have an awesome time with host Sam Sanders.

“A Look At The Lasting Political Ramifications Of California’s Prop 187”: I come out on All Things Considered to discuss what the headline states.

“The Prop. 187 rebellion inside the L.A. Times newsroom”: I get a shoutout in a remembrance by my jefe de jefes, Shelby Grad.

“OPP with Corey Cambridge”: The “Other People’s Podcast” has me on to talk Prop. 187

“A quarter century on, schools in California now a welcoming place for undocumented students”: EdSource plugs my Prop. 187 project.

“On Prop 187’s Anniversary: A Sarcastic Tribute in the LA Times”: The Center for Immigration Studies, part of the John Tanton network of anti-immigrant groups, calls me a cross between Bart Simpson and Cheech Marin — PENDEJOS!

“‘The Battle Of 187’: Podcast Explores How A California Immigration Law Helped Turn The State Blue”: Phoenix’s NPR station talks to me about Prop. 187.

“How Proposition 187 Transformed California”: So does San Diego’s NPR station.

“How The 25th Anniversary Of Proposition 187 Resonates Today”: And Sacramento’s NPR station.

“How California Has Changed 25 Years After Proposition 187”: And San Francisco’s — for an hour!

“NewsConference: Prop 187 25th anniversary”: I come out with Conan Nolan on his KNBC-TV Channel 4 show.

“The Issue Is: Gustavo Arellano”: AND on his podcast!

“Our Collective History: An Interview with Michael Nava”: Here’s a random mention!

“Essential Arts: What’s behind the abrupt shutdown of the Marciano Art Foundation?” And my LA Times colleague Carolina Miranda also plugged my 187 project.

“Essential California”: I get to write the intro to my colleague Julia Wick’s daily newsletter about California EVERYTHING.

“Prop. 187 flopped, but it taught the nation’s top immigration-control group how to win”: An investigation into the careers of the two men who wrote Prop. 187, heavily influenced by another Tanton-network anti-immigration group. KEY QUOTE: “FAIR couldn’t have discovered a better blank slate upon which to sketch out the potential of the group’s message than Proposition 187 and its authors.”

“Activists reunite to remember campaign against Prop. 187, California’s anti-illegal immigrant initiative”: A quick story about a rally commemorating the 25th anniversary of Prop. 187. “This is about 187, but not that it happened 25 years ago. It’s today,” said Maria Elena Durazo, who was a labor organizer in 1994 and is now a Democratic state senator from Los Angeles. “We got to be just as organized now as we were then because of Trump, if not more.””