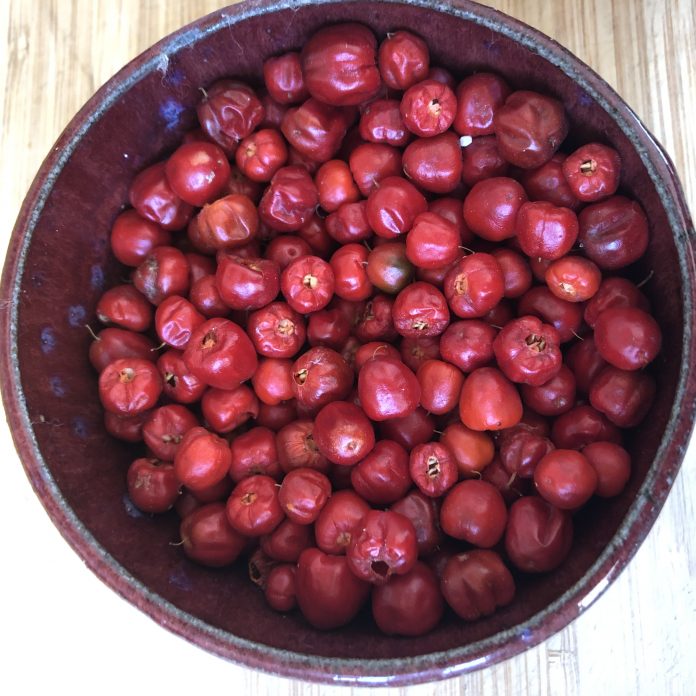 There are gardening metaphors for life, and then there’s what happened with my chiltepín.

Ever heard of it? Unless you’re from northern Mexico, or a diehard chile-head, probably not. It’s a small, red pepper that grows best in the wilds of Sonora and Sinaloa, and is amazing: bountiful, resilient to most pests, and possessor of a jolt of heat that quickly subsides into a fruity, beautiful flavor.

It’s a hard, finicky thing to grow outside of Mexico’s desert highlands, and I don’t even know how I got a chiltepín plant a couple of years ago. But I did. I put it in my garden, and wished for the best.

My wishes came true. The chiltepín grew at least 6 feet tall into a massive bush that gave hundreds of peppers. And it grew for more than a year, growing and giving as if it was an evergreen and seasons didn’t exist.

And then, out of nowhere, it died.

This happened two years ago, around the same time I lost my editor job at my previous newspaper, so I saw its passing as a sad metaphor. That job, like the pepper, was a gift that I assumed would live forever and saddened me when it suddenly didn’t.

I still haven’t gotten into growing plants from seed, because I like to patronize gardeners, and they always have better techniques than me. So I thought I would never have a chiltepín again.

And then this spring happened.

A bowlful of chiltepín, which is just a third of one plant’s harvest — FUUUUUCK

Every spring, I love to find “volunteers” – seedlings from plants that I grew last year, whose seeds from fruits I let fall on the ground burrowed deep in the soil and popped up months later. Most of my volunteers are usually tomatoes, but I also have gotten grapes, cucamelons, citrus, and blackberries.

I’ve never gotten pepper volunteers, even though I grow at least a dozen different types each season. So I was surprised when I saw a small pepper sprout grow next to where I have a Japanese eggplant.

Shocked when I found another rising from the middle of my grapes.

Stunned when I found one in the midst of my finger lime tree.

Flabbergasted when I saw a chiltepín where its mother mata once stood.

And so on and so forth until I found 10 chiltepín sprouts all over my garden.

How the hell did they get there?

It was most likely birds, who are notorious pepper lovers and deposit their love wherever they see fit. But I also know those chiltepines were a reminder to me of something a friend told shortly after I lost my job.

I was sad and told them then that few people ever get to achieve their dream job and that I had lost it.

“Why can’t you have more than one dream?” was his response.

He was right. I had focused so much on that one dream that I never prepared for life without it. Same with my chiltepín. At least with my professional career, I did what I hadn’t done as a gardener: set out seeds to see what would grow, then nurture it to maturity.

It took these 2019 chiltepín plants — growing two years after the original one passed — to get the whole lesson.

My wife is making our harvest into good micheladas at Alta Baja Market in SanTana (ask for La Norteña). But this year, I’m gonna make sure to save some chiltepín seeds and propagate them for next year.

I didn’t keep all the volunteers – I gave one to mi Tío Gabriel, and another to a follower who gifted me a yellow chiltepín plant in return.

There is more than one dream you can keep, and you never know when they’ll arise. But never stop sowing them. Also, it’s always wonderful to give dreams away to pay it forward, you know?

Gardening and life, man — now, back to pulling the weeds…

Have you ever had a genuine Puerto Rican pastele? My grandmothers used to make them at Christmas time, and they were so delicious I really didn’t care about opening presents.

Not enough good boricua food in Southern California. You have Señor Big Ed’s in Cypress, of all places, and their alcapurrias are great. Their pasteles are good, but don’t compare to what’s around in New Jersey. But after that, you’ve got a spot in North Hollywood, and there used to be a lonchera — and that’s about it for SoCal Puerto Rican food. Maybe Boricua Frank needs to get out of Vegas and make his riches here slinging some mofongo and gándules?

IMAGE OF THE WEEK: We’re still looking for a strong contract at the Los Angeles Times, so tweet out your support with the hashtag #latguild. BTW, if you’re going to try and gotcha me by bringing up old articles of mine, God bless you!

LISTENING: “Stardust,” Louis Armstrong. How have I done so many cantos and not plugged one of my 10 favorite songs EVER? The lyrics, the longing, the melancholy, all the versions — but this swinging, swaggering take from Satchmo tops them all.

READING: “The American Father And Son Exporting Tear Gas To Hong Kong”: This story started with a reporter noticing something on the ground, and then follows the trail. Great journalism on a disturbing subject…

SEPTEMBER 8: The second edition of my KCRW Great #TortillaTournament — where I match up 64 tortillas, 32 corn and 32 flour, against each other in a bracketed playoff — is BACK. I have some articles further down the canto that’ll explain, but know in this part that grand finale — tortilla tastings, music, tortilla art, food vendors and more — will be THIS SUNDAY from 3 p.m.- 7 p.m. at LA Plaza de Cultura y Artes, 501 N. Main St, Los Angeles, (213) 542-6259. The event is FREE, but you gotta RSVP to attend. DO IT DO IT DO IT!

SEPT. 12: I’ll be in conversation with author Gayle Romasanta about her awesome book, Journey for Justice: The Life of Larry Itliong, about the legendary and criminally unknown labor leader. The event will happen 6pm at my wife’s Alta Baja Market, 201 E. Fourth St., SanTana, (714) 783-2252. Book sales by LibroMobile — they always sell out of books, so preorder your copy TODAY.

“Where to Eat in Los Angeles”: My recommendations get shouted out in an Australian website.

“7 Labor Day weekend concerts, shows and festivals (including four that are free)”: The LA Times gave a plug to my Canto de Anaheim project — COOL…

“El Carnicero from Alta Baja Market, Our Drink of the Week!”: My former paper kindly reviews one of the many great micheladas at my wife’s SanTana mercado, and I make a cameo in my “functional Dickies,” whatever the hell THAT means…

“‘Journey For Justice: The Life of Larry Itliong’, A Must-Read Children’s Book for Hispanic Heritage and Filipino American History Month Celebrations”: A shoutout for an event I’m doing THIS WEEK in SanTana–read above for more info and GO GO GO!

“Newsletter: Verdict in Ghost Ship trial brings more pain and frustration for families”: An aside of a plug for an obit on Chicano hero Raul Ruíz I did months ago by my ever-talented colleague Julia Wick.

“California’s Mexican-American History Is Disappearing Beneath White Paint”: The Atlas Obscura author was supposed to interview me, but she never did…

“28 Fabulous Events In Southern California This Weekend”: LAist was kind enough to plug my KCRW #TortillaTournament

“The Art of Eating”: UCLA Magazine was kind enough to mention me alongside fellow Bruins Evan Kleiman and the late, great Jonathan Gold as grads who have influenced food in Southern California.

“Gustavo Arellano on What It Takes to Win His Great Tortilla Tournament”: My KCRW #TortillaTournament gets a preview!

“Gustavo Arellano Launches Liberate ‘Taco Tuesday’ Campaign, Enlists Lebron James”: KPCC’s AirTalk with Larry Mantle — my radio home for over a decade until…things happened — has me on to talk LeBron. Larry was kind enough to say I’m one of his all-time favorite guests — HWUT

“LeBron James Is Not the King of Tacos and He Can’t Have Taco Tuesday”: L.A. Taco enlists me in the war to #freeTacoTuesday

“LeBron James, a Fan of Tacos, Seeks to Trademark ‘Taco Tuesday’”: The homie Daniel Hernandez interviews me for the LeBron #TacoTuesday fiasco.

“LeBron James wants to own ‘Taco Tuesday,’ but he’ll have to go through Taco John’s first”: They shout out my interview with Daniel, but no my column on the subject — hmm…

“LeBron James Wants to Trademark “Taco Tuesday” And We’re Not Having It”: A plug.

“LeBron James is trying to trademark ‘Taco Tuesday’”:  Another plug.

“CEOs of two NE Ohio companies are among the country’s top business innovators, Forbes says”: And still yet another one!

“Week 3 recap: Onward to the ¡Eso Eight!”: I break down the 8 finalists of my KCRW #TortillaTournament

“KCRW and Gustavo’s Great Tortilla Tournament heats up”: A general plug for my #TortillaTournament during my usual “Orange County Line” segment.

“Developers and public land advocates fight over OC golf course”: My latest “Orange County Line,” this one on the opaque politicians trying to raze Willowick Golf Course in SanTana.

“J. Sergio O’Cadiz Moctezuma: El Artist”: A catalogue essay I did for a Cypress College exhibit on OC’s most unappreciated Mexican artist. KEY QUOTE: “His work makes OC stare uncomfortably at what it never dreamed of when it came to its Mexicans: unapologetic. Proud. Talented. Successful. “My idea of America,” he once told the Los Angeles Times, “is the right to be as Mexican as I want.” And for those sins, Orange County has long declared war on his legacy.”

“Why LeBron James should free ‘Taco Tuesday’ from its trademark shackles”: My latest Los Angeles Times story tackles King James. KEY QUOTE: “Come on, LeBron: Be the hero Mexicans have been looking for since the days of Pancho Villa and Emiliano Zapata. Become the most popular Laker in the Mexican American community since Mark Madsen, and win one for la raza.”