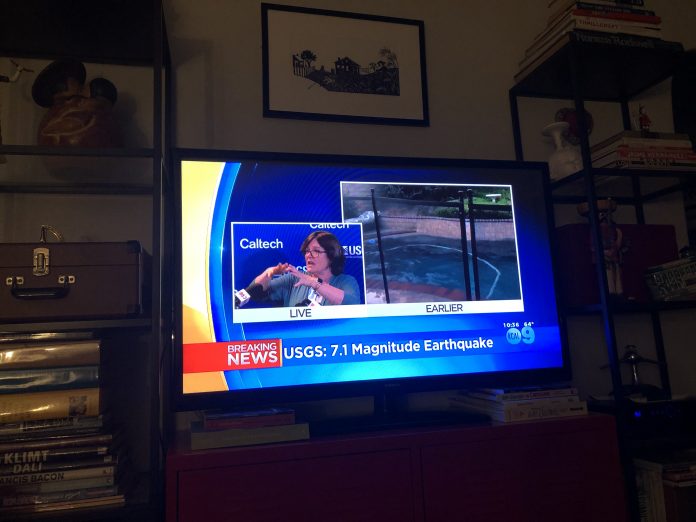 I don’t like earthquakes — but then again, does anyone except Dr. Lucy Jones care for them?

One of the earliest memories I have of hearing something in English was some ominous report on KCAL-TV Channel 9 about California’s much-delayed (even then) Big One — I couldn’t have been more than five.

What a way to assimilate: Doom is inevitable.

I’ve been living with that sword of Damoclese for nearly 35 years now.

Earthquakes are the best disaster metaphor for life. You historically couldn’t predict them. Now, with technology, you get like 45 seconds. Doesn’t change what they bring: instantaneous chaos, where all you can do is hang on. You can prepare all you want — but if it comes bad, you’re fucked.

California, with its location on the Ring of Fire, always gets them, so you learn to deal with earthquakes as a kid — duck and cover, earthquake kits, Lucy Jones, Caltech, the Richter scale. Prepares you for the inevitability that it’s all going to be over too soon, you know?

Yet life continues. So you need to live as if it’s never going to come, because what good is it to have a grey cloud follow you around like Eeyore

So here’s my life in Earthquakes. If there were more, I don’t remember them — and perhaps that’s for the best. 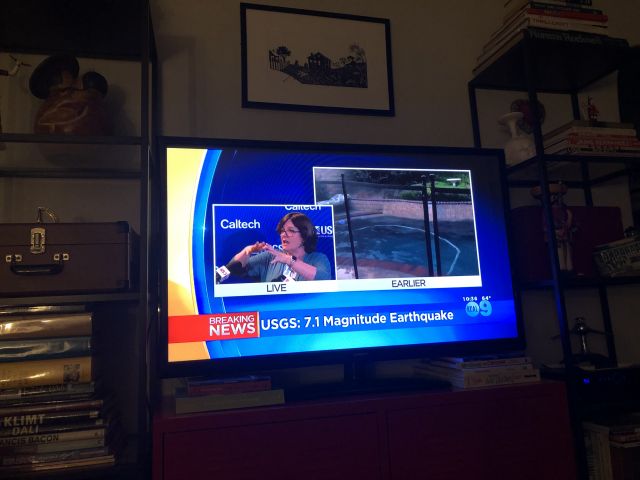 Dr. Lucy Jones has lectured to me for nearly my entire life!

We woke up to a terrible jolt in our granny flat in Anacrime. That one freaked me out so much that either the following night or a couple of nights later, I fell off the top bunker of the bed I shared with my sister and broke my collarbone. To this day, it’s the only bone I’ve ever broken. Has modern medicine created a better cast for that injure than that brace I had to wear that looked like a stripped-down jet pack?

Didn’t feel it, but was watching the World Series when it happened. Got freaked out by the footage of a section of the Golden Gate Bridge collapsing, and a car driving into the San Francisco Bay — YIKES!!!

Now a teen, I was reading the Orange County Register when a hard knock happened. Not too long later, a 6.5 earthquake coming from Big Bear happened. I remember thinking, “Not again!” and getting freaked out when news said the earthquakes happened on two separate faults, and that that was weird — UGH…

The earthquake was bad, but even worse was half of our swimming pool flooding our living room and soaking the rug. We went to tile some years later, like a real Mexican living room should have.

All I remember about this one is jumping off the top bunker of the bed I shared with my brother, grabbing him, and standing in the doorway of our room.

I was at my future wife’s past store when this one hit, and our dog Marge zoomed out of the store. Grabbed her, then rushed back to the offices of my former paper, which were on the fifth floor. One of the columns had a crack in it — we moved out of that office soon after.

We were watching television when a slow roller passed. Longest earthquake of my life until…

The one yesterday. We were enjoying dinner at Mercado in downtown SanTana when it hit. First time in my life where what Jones has long predicted — a strong earthquake JUST might be a foreshock to a stronger one —  came true.

I saw you responded to the guy asking about Anaheim High School being named the Colonists. What do you think about the San Francisco School Board painting over a Depression Era mural, painted by a Communist, that critiqued (to put it nicely) George Washington, Manifest Destiny, etc. The School Board is demanding that it be destroyed (not removed or covered over) because it might offend the children and send them into an unsafe space.  Apparently they created a committee that came up with this great idea. Sounds like the Taliban has taken over the SF School Board, but hey, what do I know.

The school board is stupid, but implying that the SF snowflakes are Taliban? Have you thrown the same accusations at the many, many, MANY more conservatives who have destroyed murals in California over the past 80 years? Do me a favor and buy ¡Murales Rebeldes!, a book about destroyed Chicano murals for which I was lucky enough to write the intro AND afterward. Know your mural history! 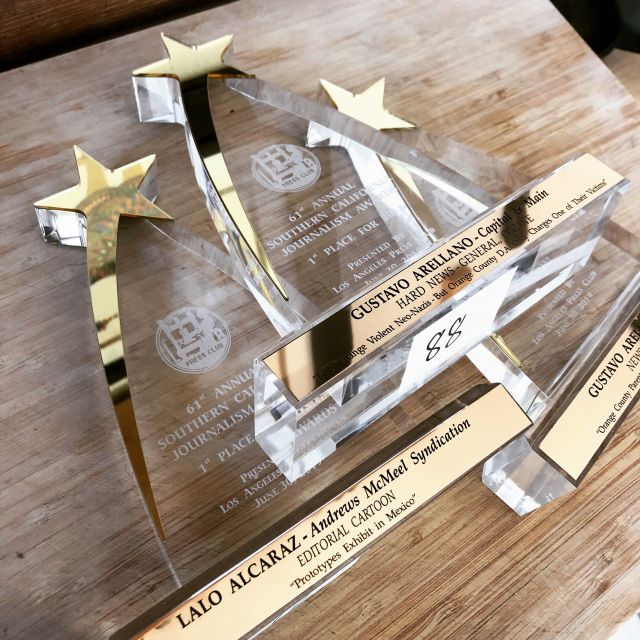 IMAGE OF THE WEEK: The three L.A. Press Club first-place awards I won last Sunday: 2 for my work exposing racist losers in OC for Capital & Main, and another one for my work as an editorial cartoonist under the pen name Lalo Alcaraz haha.

LISTENING: “The Town I Live In,” McKinley Mitchell. The greatest oldie-but-goodie of all time? Maybe? Always love the singer’s frenzied nostalgia, the clangy guitar, the sad lyrics — the everything. Why can’t K-Earth play THAT instead of the pinche Police?

READING: “The Image America Shouldn’t Need”: My comadre Tina Vasquez with a powerful essay in the New York Review of Books on the horrific image of the Salvadoran father-and-daughter who drowned on the Rio Grande. You know things are getting better when a mujer from Strong Beach gets into the mighty NYRB.

Eat with Gustavo! So next Saturday, July 13, from 11 a.m.-2 p.m. I’ll be doing one of my occasional SanTana food tours. The topic this time: mariscos (Mexican seafood). Interested? Of course you are. Price is $10 plus the cost of food. We’ll be hitting up six different eats — BOOM. Call (714) 783-2252, or reserve by emailing me at mexicanwithglasses@gmail.com — GO GO GO!

“California Sun”: My story also got a shoutout in this excellent newsletter about all things California

“Meet The Gracious Family That The Creator Of Taco Bell Ripped Off”: My appearance at Mitla Cafe for Ugly Delicious gets the Mitú treatment.

“Capital & Main Wins 17 Awards, Top Prize for Investigative Reporting”: This awesome online news agency was not only kind enough to submit some of my stories for them to the LA Press Club, they paid for them — BOOM.

“Acoge Estados Unidos a condimento mexicano”: A Nicaraguan paper picks up a New York Times story about Tajín where I was quoted…