Almost from the time I was born, I was told I had a Voice.

My mami still revels in telling everyone I hissed whenever she or others tried to hold me (literally, a hiss: It was something like “AUSHHHH!”). Throughout elementary and junior high school, teachers singled me out as the talkative one, mostly because it was true.

(I’ll never forget the experiment that my Spanish teacher, Mr. Montgomery, tried on me and his other problem students in 8th grade at Sycamore Junior High: he made us all sit together, next to his desk, and dared us to talk. The experiment lasted all of two weeks, because we — really, me and Jesus Acevedo — just babbled too much and he got sick of giving out detentions).

At Anaheim High, my best friend Art always said he could hear my Voice across campus because “it could cut through concrete.”

I’ve had enough of a Voice in my professional career that a chingo of people in Southern California have probably heard it — that’s what happens when you’re one of the few people that can pull off appearances on KROQ, AirTalk with Larry Mantle, KCRW, KFI, KABC, Power 106, La Raza, KPFK, Tom Leykis, Evan Kleiman, The Woody Show,  Bill Handel, KFWB, KNX — and get invited to return again and again.

Why, just the other day, some woman told a crowd she was going to have a fangirl moment and asked me to say her name with an “Hola,” the way I always say “Hola, Steve” during my Monday “Orange County Line” segments on KCRW.

She loved my Voice.

I say all of the above not to gloat, but put out there because Voice has been on my mind recently — or rather, on the minds of many of ustedes as my first stories for the Los Angeles Times start to roll out.

Seems a lot of you think my Voice is in danger.

And I’m here to tell you it ain’t. 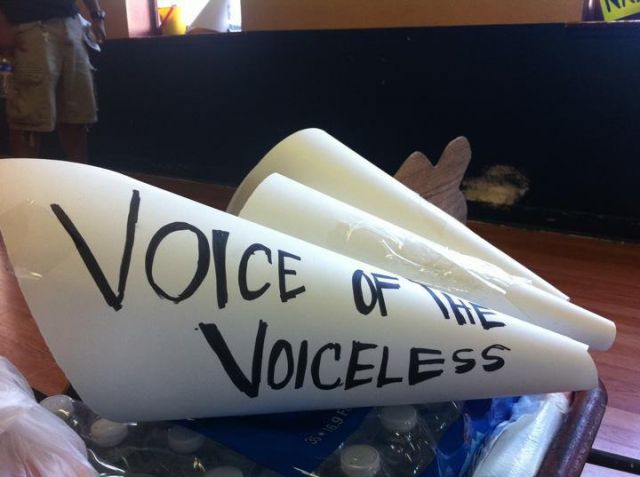 I heard no real critique when I announced I was joining the LA Times save for one: What about my Voice?

The concern among some was that I was going to lose my “voice,” about which I quickly found out everyone had a different definition. For some, I was a Voice for Orange County (not to be confused with the fine Voice of OC nonprofit news agency); others felt I’m a Voice for Mexican-Americans.

Others just liked my Voice at the OC Weekly: a profane, bilingual cri de coeur who loved to comfort the afflicted and afflict the comfortable in OC, and Rick Bayless.

The feeling was that joining a mainstream newspaper like the LA Times would temper my Voice, would limit my story selection and verve.

From the moment I became a reporter, I vowed to never publish a story that I wouldn’t forever be able to stand by — my story selection, my style of writing. My Voice.

It is the only calling card I have in this godforsaken business, so you’re damn straight I will guard my Voice with my life.

It has different tones, of course. Whenever I wrote for the New Yorker, it was elegant and freeflowing; for Reason, punchier. NPR was nerdier; High Country News, a bit more serious. I talk to kindergartners, we mostly talk food; senior citizens, politics.

I’m fine with all of it. As I tell anyone who asks, I change my tone for the audience, but never the message.

My only real struggle in joining the LA Times was about losing my California columna, which was all opinion, in favor of a reporter position, where I can only stick to the facts. But choosing the latter didn’t bother me, because I’ve done that my entire career, despite what the haters may say.

A close friend of mine accused me dereliction of duty by taking the LA Times job — he says I can be the Voice in the wilderness right now that this country needs, but I’m too much of a coward to accept my destiny.

Maybe I read too much Camus and Sartre as a high-schooler, but I still think every individual should have their Voice, one free from any blind allegiances to anything and informed by a rigorous study of LYFE. Because it’s through that individual Voice that you have freedom.

Being a self-proclaimed Voice for someone, something, or people shackles you to what you supposedly represent, forces you to accept sins and promote sinners. And it discourages people from questioning it.

That might be good for a crusader, but I’m a — to quote Don Palabraz — a truth-teller in a world of mentiras. I’ve long criticized those I admire and respect when they do wrong, and praise people I loathe when they do right.

And you’re not supposed to do that in this modern world.

The only Voice you should ever follow without question…

I think that philosophy what has gained me my meager following over the years. People who appreciate that I follow my Voice, but also listen to the Voices of others.

As for the LA Times: My editors returned my first story to me, saying it was boring and dull and written in a way that seemed like I was writing based on how I thought the LA Times wanted me to write.

It didn’t have my Voice.

They were right. So I turned in another draft, based on how I’ve always written a story: heavily reported. Insightful. Witty when needed. Always surprising. No profanity, but it’s all good.

Success. “This is your Voice!” my editor enthused.

Corre la voz: I’m going to be all right.

UPDATE ON ASK A MEXICAN WITH GLASSES QUESTIONS!

I’ve gotten a LOT of questions from ustedes — so many, in fact, that I’m going to make it a regular feature of my newsletters. Got a caliente query for me about ANYTHING? Email mexicanwithglasses@gmail.com and I’ll answer in the coming weeks!

And apologies for the delay in my canto this week — I realized it was the President’s Day weekend, and figured half of you were stuck in Lebec on Saturday but would be where you have to be today…HA!

LISTENING: “Periódico de Ayer,” Hector Lavoe. In music, there’s only one La Voz, and that’s Puerto Rican magus Hector Lavoe. All his stuff is scintillating, but I gotta go with his metaphor of love as an old newspaper — no one could make despair sound so danceable, right Boricua Frank?

READING: “Covering the Cops.” This oldie-but-goodie from the New Yorker chronicles Miami’s most famous crime reporter, the woman who crafted one of the most beloved opening lines in journalism: “Gary Robinson died hungry.” By the ever-gentle Calvin Trillin.

“Guest Column: A Phoenix in Malibu”: A Malibu resident upset about an LA Times columna I did about his city’s propensity to burn and rebuild takes on my “ignorant and inflammatory” piece. Good for him!

“Behold New Mexico’s ultimate pork fiesta: 43 pigs, 300 gallons of chile and 22,000 tortillas”: My LA TIMESdispatch from the World’s Largest Matanza, a huge festival in Belen, New Mexico that seeks to preserve Hispano foodways and stuff you silly. KEY QUOTE: “These all-day affairs see men and women break down pigs and use every part, from the blood to the bung.”

“Albuquerque’s $133-million electric bus system is going nowhere fast”: My first story for the LA Times‘ National desk, on a boondoggle of a public-transit project in one of my favorite cities. KEY QUOTE: “Shiny stations along the line stand dormant. Vandals have smashed ticket dispensers. Flat-screen televisions meant to alert passengers about boarding times flash a request to get rebooted. Autos can’t use the bus lanes, which cyclists have claimed as their own.”