I knew that my inaugural #TortillaTournament for KCRW would be successful the moment I pulled into the Los Angeles River Center & Gardens parking lot on September 16. It wasn’t my cockiness, my faith in the KCRW machine, or anything else other than the fact that Ernest Miller (whom I always called Ernie) parked at the same time as me, right next to me.

He was there in his role as corporate chef for Coast Packing Co., the largest supplier of animal fats like (lard and beef tallow) west of the Mississippi. Coast was the sole sponsor for the #TortillaTournament, a generous gesture gracias to my friendship with Ernie, and his belief in my crazy idea.

“Ready for tortillas?” he said with his large grin and bright eyes. I confessed that I didn’t know whether people would show up. “Don’t even worry about it,” Ernie said. “We’re going to be good. You’re just great at everything that you do, and I’ve got the lard!”

Typical Ernie: reassuring, funny, confident of himself and his students.

True to his word, the #TortillaTournament was a success. He led a well-attended demo on how to use lard to make flour tortillas, and asked my truck-driving dad to do an oral history with him about his experiences at Coast Packing. And Ernie yelled “¡Viva manteca!” at one point, which I misinterpreted as “¡Viva Zacatecas!” and which he corrected me about afterward.

He did that in the parking lot, as Ernie broke down the Coast banners he had brought for the event. “You did great—I can’t wait to do it next year,” he told me as my wife and I got into our Yukon. We promised to hang out with him and his wonderful wife soon.

Five days later, Ernie was no longer with us. He had passed away in his sleep. 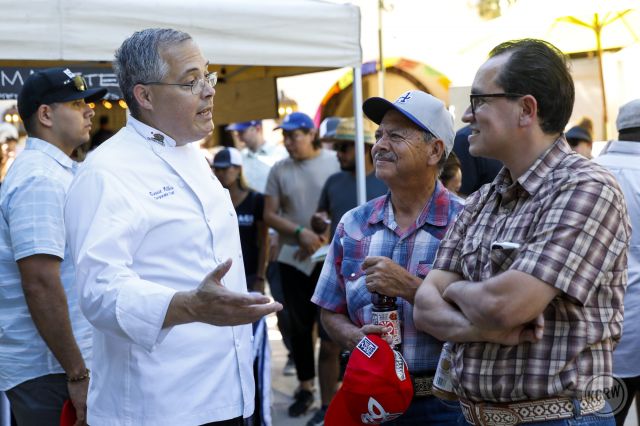 I met Ernie a decade ago gracias to my wife. He had read a blog post I had written about a chocolate class at my wife’s former store, The Road Less Traveled in SanTana. Ernie struck up a conversation with her about food preservation classes he was going to take in San Bernardino through the UC Cooperative Extension’s Master Food Preserver Program.

For months, she and Ernie would brave rush-hour traffic on the 10 to take hours-long classes every evening. I’d join them every once in a while, and got a quick education in Ernie, usually over garbage burritos (that’s their name) at Rosa Maria’s. Ernie was a Navy veteran. A Yale Law School graduate. At that time, working as a line cook at the Storyteller’s Cafe in Disneyland. A nerd. Kind.

And now, he wanted to learn how to preserve food.

My wife and Ernie both became master food preservers. The experience galvanized his conviction that a life in food was for him. He became executive chef at the Farmer’s Kitchen run by the Hollywood Farmer’s Market. From there, Ernie taught a generation of Southern California chefs and home cooks how to make jellies, put up pickles, prepare canned food—and teach others how to do it.

He did so quietly, never seeking the spotlight—he wanted his actions to speak, and nothing else. He wanted to teach others everything that he learned. That’s what led Ernie to serve as a chef instructor for Le Cordon Bleu, to co-lead Slow Food Los Angeles, to help out at the Orange County Fair and serve as a speaker for the Culinary Historians of Southern California. To start his own set of classes and preserving kits with Rancho La Merced Provisions.

I never saw him happier professionally, though, than when he started at Coast Packing last spring. Any time he had a chance to talk to me about lard or tallow, he did. Even on the most random tweet, he’d find a lard angle.

Typical Ernie. Passionate. Great taste. And knowing what he spoke of. 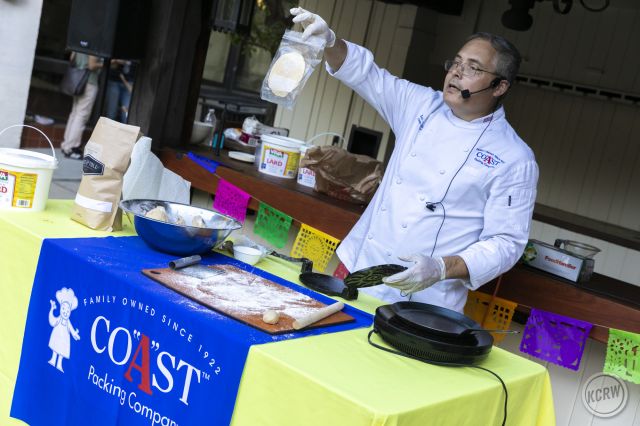 Ernie’s death has shocked not just his family and friends, but the greater culinary world in Southern California. He was a grand apostle for good food in all of its manifestations—its history and flavor, potential to teach and to inspire, for foodies and the public at large—like few before him, and few that’ll follow. “Food is never just food—it always has a narrative,” Ernie once wrote. “The more you know the history and story of food, the better it tastes.”

I just learned that Ernie was 51 years old. I always figured him for 45 going on 22. His enthusiasm and goofy humor made him ever-loveable. I remember once sharing a hotel room with him, and waking up around 5 a.m. to see him doing sit-ups and push-ups. That showed his drive, his commitment.

It pains me that Ernie isn’t around to see how much we collectively loved him.

To his family and close friends: Know that whenever a restaurant serves fresh jam, or someone talks about restaurant history, they’re expressing a part of Ernie.

To his widow, Debbie: You have a community here for you, forever. Never be afraid to ask for help.

To those who never met Ernie: He was one of the good guys. Please donate to Ernie’s memorial fund.

And to Ernie: Gracias for gracing our lives. You left us too quickly—yet in that short time we had you, you bettered us all.

This was the semana that was:

READING: “The Past, Present and Future of the Triple Option”: Fun, informative article on my all-time favorite offensive attack in football. Used to use it on NCAA 2006 for XBox 360 for DAZE…

LISTENING: “God’s Gonna Cut You Down,” Johnny Cash. This one goes out to the self-proclaimed Renate Alumnius and their fellow travelers in privileged pendejadas.

“Gustavo Arellano on Su Teatro’s Interview With a Mexican”: I get interviewed about the play based on my writings currently on stage in Denver (kudos to the Denver subscriber who found out about the play from reading this newsletter and who met me at opening night!). Play runs through mid-October, so go see it!

“Jimboy’s Delivers Cal-Mex History With Fried Corn and Seasoned Beef”: I make a cameo in my old paper for a story about a so-so Cal-Mex chain.

“Gustavo Arellano Comforts the Afflicted and Afflicts the Comfortable”: I appear on a podcast for Palacio Magazine.

“It’s a shame if this election means adiós for Kevin De León”: My latest California columna for the Los Angeles Times wonders why California’s state senate leader ran against Dianne Feinstein for her U.S. senator seat. KEY QUOTE: “He easily could have won the lieutenant governor’s race this year; the top two finishers are first-time candidate Eleni Kounalakis and relatively unknown state Sen. Ed Hernandez (D-Azusa). He could’ve pulled a Newsom and bided his time in that role until something better came up than the Shemp of California’s executive branch.”

If you made it down here and are so inclined, please do donate to Ernest Miller’s memorial fund. Gracias for subscribing…