“Never thought I’d say this, but fuck Orange County,” read the comment of a young woman on the Facebook page of William Camargo, an Anaheimer artist/writer/photographer/reporter who has plied his trade in Chicago for years (come back home, loco; Anacrime needs you!).

I don’t know William’s friend, and generally try not to comment on comments from people I don’t know, but I had to speak up in OC’s defense.

William liked my comment, so I must be right!

I’ve long made that distinction to out-of-towners, exes, cousins, everyone. Orange County is one nasty place, if you look for it—and that’s all the national media has ever sought from the only place I’ve ever called home.

OC made national news twice last week—once, for cities that vow to buck California’s sanctuary-state law, and another after rich ‘burbs revolted against a plan by the Orange County Board of Supervisors to house homeless on county property within their  limits.

The old Orange County—the one of lunatic politicians, heartless NIMBYers, avaricious assholes and Chris Epting—was on full display for everyone to see and mock. And people rightfully did.

But that’s never been my Orange County. 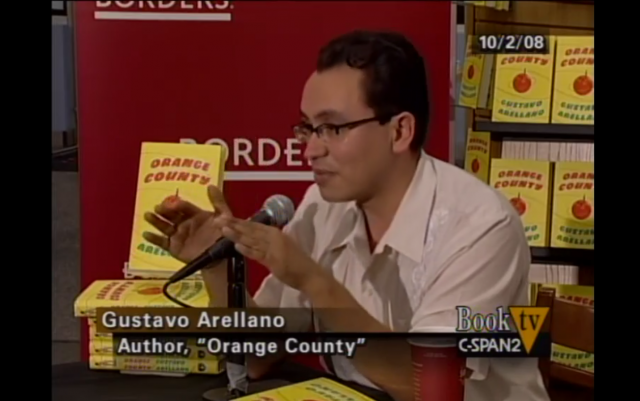 Me at the Mission Viejo Borders in 2008. Remember Borders?
A decade ago, Scribner released my Orange County: A Personal History. It was a humongous flop, garnering nowhere near the success of my previous, best-selling book, nor garnering the critical praise of my 2012 Taco USA: How Mexican Food Conquered America.

But I didn’t care, I’ll tell anyone who’ll listen. Because I wrote that book with the future in mind.

And the future is now.

I knew that eventually, the rest of the United States and even Orange County would have take Orange County seriously. That it was more complex than Disneyland and Reagan quotes about dying Republicans.

And when that happened, people would want a general history of OC to understand this fucked-up place, and would quickly tire of the orange-crate, widely available histories that tried to pass themselves off as serious scholarship.

That’s where my book came in. I knew even in 2008 that my book would be the easiest-to-get OC history book for years, that high school teachers and college professors would assign my book when they could no longer ignore that their own knowledge of Orange County was laughable.

And so they’d be forced to teach my idea of Orange County. And I’d get to continue the work of my former newspaper, OC Weekly, and influence an entire generation of thought about the county.

My Orange County is a land where the clueless, racist idiots that dominate too much of our national coverage are a joke, slowly becoming extinct or at least getting exiled to Laguna Niguel.

My Orange County—one that’s been majority-minority since 2004—is a place where important civil-rights victories were logged, where the damned have fought back at every opportunity.

My Orange County is a place of immigrants, of the working class, of tireless activists like Dwight and Leia Smith of the Catholic Worker (who have just been behind two of the most important lawsuits protecting OC’s homeless over the past 20 years).

No wonder my book was a flop: I told the world the complex truth about us, a truth people here and outside still don’t want to believe. And because of that, I’ve chosen to live in OC my entire life and plan to live here if the Santo Niño de Atocha allows it.

In my generation, too many talented people left for progressive paradises like San Francisco, NYC, Austin, Portland. They mocked me for remaining; I told them I’d rather be in the belly of the beast and help to slay it. And, increasingly, more people are thinking like me.

The nasty Orange County that roared last week, that Donald Trump congratulated? It’s its last gasp. My Orange County—OUR OC, for people like William and others—is ascendant. And that’s why Trump didn’t visit us when he had the chance—too many people would boo him out to Temecula. 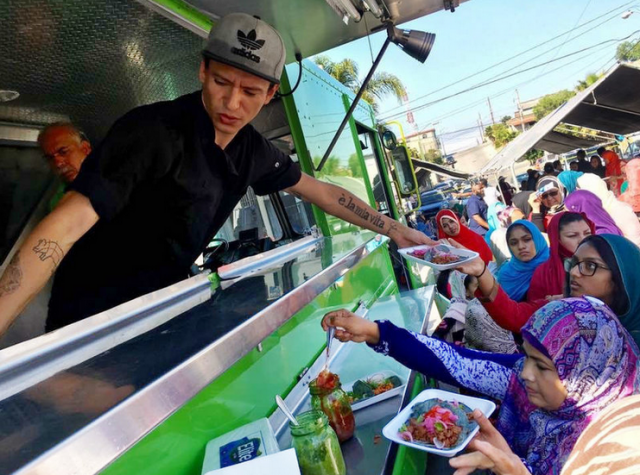 Mexicans and Muslims: Two of Amerikka’s most wanted!
Enough ranting. This was the semana that was:

Listening: “Summer Breeze,” The Isley Brothers. Criminally underrated group (the youngsters only remember them for “Shout,” the greatest party song EVER) with a criminally underrated guitar solo to end this song. And the line “Blowing through the jasmine in my mind” is better than Neruda.

Reading: Malcolm X Speaks: 10 Speaches and Statements by One of the Oustanding Revoulutionary Leaders of the 20th Century. If you think MLK’s words are twisted, you should read what Brother Malcolm actually said about race, politics, economics, and more.

Somewhat of a slow week for me, because I’m working on…something, part 2. So whenever that happens, I’ll dig up some oldies-but-goodies, because that’s what Mexicans do, you know?

Orange County’s Anti-Sanctuary Fervor is All but Guaranteed to Backfire: My weekly Los Angeles Times California columna took on the ant-sanctuary leanings of OC. KEY QUOTE: “Anti-immigrant measures may still play in the tiniest parts of Orange County or the reddest parts of the state, but they will eventually founder in the new California. And if you don’t believe me, how’s the state GOP doing statewide since Proposition 187”

Building A Latino-Muslim Coalition With #TacoTrucksAtEveryMosque: I wrote this one back in February, and it’s exactly what it sounds like: Latino and Muslim activists use tacos at mosques to build unity between two of America’s most despised minorities. KEY QUOTE: “Hamida says she’s even seen conservative protesters who initially showed up to troll #TacoTrucksatEveryMosque line up instead at their events. “I guess they just wanted the halal tacos,” she now says with a laugh. “They wanted to know what the magic is.”

Gustavo on “Unregistered with Thaddeus Russell”: Two hours and 15 minutes of me! I talked with the renegade historian about EVERYTHING. I especially liked him linking me to Jewish intellectuals who, like me, grew up working class and with parents that had no education. It happens!