Reading: “Telling Tales: How the Media Fails Appalachia.” Scalawag is one of the finer regional publications out there, a rag that embraces the South in all its beautiful contradictions. As I’ve always said: Southerners and Mexicans are brothers from another madre.

I speak a lot—well, DUH. What I mean to say is I do a lot of speaking engagements—Kiwanis, elementary schools, colleges, and the like. The audiences change (nastiest receptions? Democrats. Funniest? Kindergartners—all they want to know is how much money you make. Capitalism!), and so do the topics, but I like to think there’s a through-line in all my stuff.

And one of the points I always try to emphasize is a three-word phrase: Know your history.

It’s so simple to remember, but so quickly forgotten. Americans, for all their obsession with nostalgia, quickly forget that the past is far more complex than they can even comprehend.

Know your history!, I tell my crowds, because it allows people to better confront the present and tackle the future. 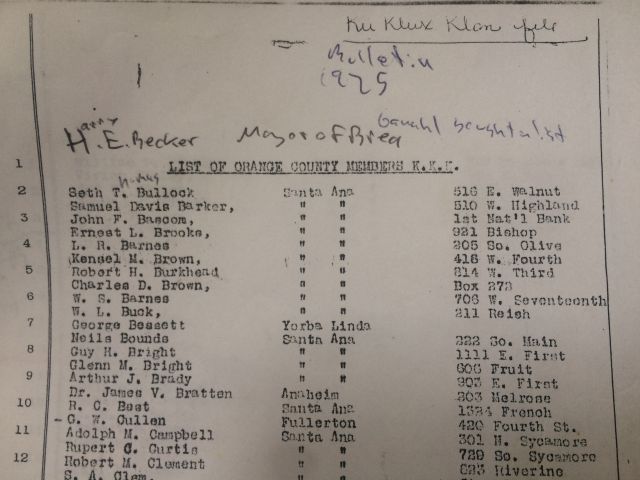 And this isn’t even the whole first page!
Back in 2011 or so, my professor friend from Santa Ana College, Luis F. Fernandez gave me a list titled “Orange County Ku Klux Klan Members” from the Anaheim History Room (now called the Anaheim Heritage Center). It dated from the 1920s, and asked me if I recognized any names.

I told him I recognized a shitload, because they were the names of many founding fathers of OC cities (including two sheriffs!) who have streets, schools, and parks named after them.

So I started an award-winning weekly column for OC Weekly called “Profiles in OC Pioneers Who Were Klan Members”, where I’d reveal a name of a founding father, say what the official history books said about them, then reveal that they were Klan.

Unsurprisingly, many people refused to believe my columns, deeming them fake news—nevermind that the list was donated to Anaheim by Leo Friis, its longtime attorney and one of the founding fathers of OC history. Hardly someone prone to donate any ol’ thing to archives, you know? But I continued the list. Know your history!

Flashforward to last year, when liberal Brea parents FINALLY discovered, five years after my series, that one of the names on the list was William Fanning, who has an elementary school named after him.

They then started questioning me about whether the list was accurate. Frankly—and one of the activists can attest to this—I told them to fuck off, because I’m not in the business of reproving stories.

The parents finally believed me, and began petitioning the Brea-Olinda Unified School District to rename Fanning Elementary. In response, the superintendent commissioned the Brea Historical Society to prepare a paper to refute my reporting.

It was a laughable attempt at whitewashing the past, but the Orange County Register said it was legit. In comes in one James Dollins, pastor of Anaheim United Methodist Church.

On a since-deleted Facebook update, without naming me, he called my reporting “false,” “unsubstantiated,” “damaging,” “pure conjecture,” and claimed I “badly injured” Fanning’s grandson, who just so happens to belong to Anaheim United Methodist.

When I responded with the obvious—no one had ever questioned the validity of the KKK list (which had been used by academics for decades) until a Mexican reporter dug it up—he responded in Spanish, that patronizing pendejo.

Then came my former Weekly colleague Gabriel San Román to show what I’ve said all these years: that the KKK membership list is not only authentic AF, but that the Anaheim Heritage Center also has a letter from Friis where he explains the list I used all these years “pertain[ed] to Orange County residents who were members of the Ku Klux Klan.”

As for Dollins? He’s still ranting about me to people, and tried to send me a Facebook message—yeah, no. Last I checked, he was claiming people joined the KKK in the 1920s for “innocent goals.” Hey, padre: Here’s some Spanish for you: YA ENFADAS. Know your history!

My file on the OC KKK during the 1920s. You should see the one I have for the 1990s…
So why care about old lists in archives that no one gave a shit about for decades? Because people don’t know their history—and we live with those consequences.

KPBS-TV in San Diego almost didn’t run the excellent new documentary on theBrown Buffalo himself, Oscar Zeta Acosta. Thankfully, people noted, and made change happen. It premiered yesterday—check out the docu, and know your history!

Meanwhile, my beloved OC made national news for all the wrong reasons again this week, when Los Alamitos—a city whose only real claim to fame is high school football and restaurant that sells Cornish pasties—announced it was going to opt out of California’s sanctuary-state policy.

That fiasco will be the subject of my weekly California columna for the Los Angeles Times this week, so I won’t talk about it much here save for this: anyone who’s surprised by this move doesn’t know their history.

In my little-read Orange County: A Personal History, I go into detail about how OC was the hate capital of America for decades. In fact, you can make a through line from a death in San Clemente 25 years ago to the election of Donald Trump—but people don’t know their history, so got surprised when he won in 2016.

End on a positive note? I found some great pozole verde this week—but that’s another newsletter.

Somewhat of a slow week for me, because I’m working on…something. So whenever that happens, I’ll dig up some oldies-but-goodies, because that’s what Mexicans do, you know?

Joaquin Avila was a ‘lion’ for voting rights. But did his efforts actually fix ballot box discrimination?: My weekly Los Angeles Times California column takes on district elections, which I’ve never particularly cared for but at least had a realization after the death of the Macarthur genius from Compton. KEY QUOTE: “This suggests that the goal of these suits, then and now, isn’t to create a system that elects just more minority politicians, but more liberal minority politicians. So let’s stop casting the push for district elections as a modern-day Freedom Summer.”

Mexican Radio in Los Angeles Crashes—And Down With It Comes An Anti-Immigrant Fable: My lefty pals freak out that I write for the premier libertarian publication. “YOU’RE TAKING KOCH MONEY?!” Damn straight—and I get to write anti-Know Nothing rants like this December piece, which took something as simple as Los Angeles-area radio ratings to tell you a tale of assimilation in modern-day Southern California. KEY QUOTE: “But it’s not as if we do nothing but listen to Spanish-language music at all times. We also love Morrissey. And African-American oldies but goodies. And the Doors. And especially metal.”

Alison Rosen is Your New Best Friend: I actually did this podcast back in 2016, but it remains one of my favorite because the nearly two-hour episode REALLY delves into my full life story—like, eighth-grade traumas and shit. Alison is now a podcast superstar, but I still remember her when she was the star culture writer for our former paper, OC Weekly.