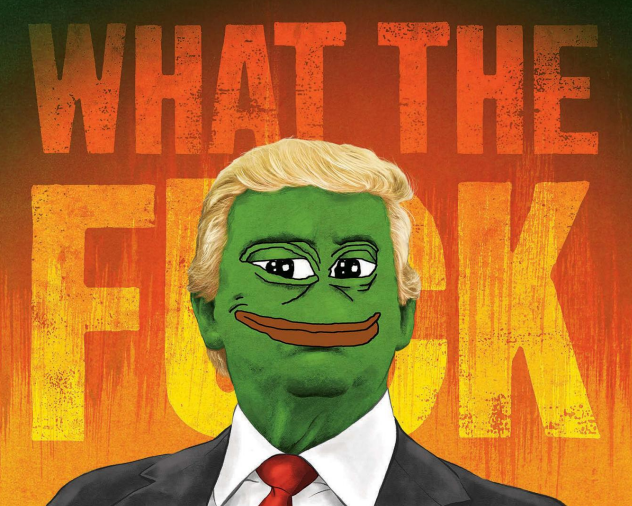 The first half of Election Day 2016 for me was a running argument with my art director.

I was editor of OC Weekly then, of course, and we were preparing for a much-cherished tradition: Election Day coverage. That’s when the entire staff compiled a timeline of the day, to ever-hilarious, ever-diverse results.

Part of that tradition was also legendary covers. “Fat Cat Nation” shot by the disappeared-too-soon Jack Gould. Dubya giving everyone the bird. Mitt Romney as the Angel Moroni.

And my art director had another doozy: Hillary mopping the floor with Donald Trump’s hair, holding him upside-down like a mop while holding on to his crotch.

It was brilliant, it was hilarious. “But what do you have if Trump wins?” I asked Dustin.

Nothing, he said. Because there was no chance Trump would win.

By 5:30 p.m, we still had no Trump alternative. And the deadline for the printer for our covers was 7 p.m.

By 6:45 p.m., Dustin created the image you’re about to see in like a minute, because he’s a genius like that.

Told you, I said with no satisfaction whatsoever.

I’ve been saying that to nearly everyone else now for four years.

In a week and a half, Election Day 2020 descends upon the land.

Everyone says it’s the most important election of our lifetime.

THEY ALL ARE, FOLKS.

But the 2016 election will forever stick with me because it confirmed what I’ve always known, and what I wish humanity — but especially Americans, and ESPECIALLY the Left — may one day learn.

No Democrat ever took Trump seriously until they had to.

Hillary was so confident in her victory that she had the gall to hold her Election Night party in a facility with a glass ceiling — because, you know, she was going to shatter it with a win.

I ended Election Night 2020 at a bar in downtown SanTana blotto (don’t worry, I didn’t drive) and consoling sobbing liberals who really, truly thought there was no way Trump could win.

I knew he would. Because too many people assumed he wouldn’t.

The polls currently tell us Biden has nearly double the lead that Hillary had over Trump.

But no Democrat is taking Biden’s lead for granted.

Never take anything for granted. Fight for everything, at all time, and cherish the hell out of it while you got it. WERK.

So, at the risk of sounding like That White Guy or falling into a bad Seinfeld impression (but, like the man said, I repeat myself): what’s the deal with enchilada sauce?

No, I know what it’s about and for, but enchilada sauce has always been kind of, well, bland. From restaurants to the frozen stuff, it always comes off as somehow peppery but without a lot of actual flavor going on. Like everyone is pouring from the same, lame, unthreatening can of Red Sauce that gabachos won’t be too scared of.

Or am I expecting too much from a sauce? Stumbling explanations, recipes or, in a pinch, brand recommendations would be welcome because I suspect the good stuff is out there.

Bad enchilada sauces — and that’s most of them — taste like the tin can from whence they come. Great enchilada sauces — I always like El Pato for store-bought — need to be heated up so it can better soak into the tortilla, have flavor but not spice, and not leave the enchilada soggy. But ultimately MUST be made fresh.

I’d give you my mami’s recipe — but we never got it from her because we assumed she’d live forever. Hubris sucks.

IMAGE OF THE WEEK: The two finalists for my KCRW #TortillaTournament, which concluded last weekend: HomeState for flour, Taco Maria for corn. Buy them both, and read below to see who won the Golden Tortilla!

QUOTE OF THE WEEK: “I have a responsibility to guys like him. If I pitch well from here on out, I can double that man’s income.”

–Sandy Koufax, during a World Series

LISTENING:“Llorando Se Fue,” Los Kjarkas. You don’t have to see the creep-vibes video for this Bolivian saya song. But that melody? Haunting — and familiar, right? That’s because it was the basis for the far-more-famous “Lambada” — and by “basis,” I mean ripped off even worse than “My Sweet Lord” did “He’s So Fine.” Stick to the original.

READING: “An Ocean Separated Them. A Surfboard Connected Them. See: 2020 Has a Happy Story After All.” Sports Illustrated was my unwitting journalism school in 8th grade, and they still continue to put out great longform pieces (although they can use a better editor, and owners). This one, in particular, will grip you even if you don’t care about surfing (like yours truly).

SHOUTOUT TO: Ben, who kindly donated 50 tacos to sponsor a full month of MailChango! He writes: “Can you plug my Instagram @BenFillsIn? I am trying to get some new subscribers, and if you know anyone in the music/journalism business that I would be interested in doing an interview with me that would be really cool!”

Folks: Ben is a 12-year-old drummer who is a HELL of an interviewer for his IG/YouTube channel — his session with me was better than reporters thrice his age who have profiled me in the past. Follow him, and journalists: Fill Ben in!

So remember how a couple of months ago, I asked ustedes to raise 2,000 tacos so I could commission original journalism? I did! I’m not including them here because this canto is too long already (and about to get longer with the chingo of stories below), but get a sneak peak at my website. A fuller overview next week…

Subscriber April Mayorga has offered a FREE ticket to “Day of the Dead Traditions throughout Native Nations (Pueblos Originarios) in Mexico,” an online Zoom lecture that she’s organizing next week. First person to tell me in what role did April recently make a cameo in my LA Times columna gets the freebie — email me your guesses NOW! Everyone else — buy your ticket TODAY.

“And the 2020 Golden Tortilla goes to … HomeState”: I appear on Good Food with Evan Kleiman to talk the finale of my KCRW #TortillaTournament.

“Taco News Roundup: Dallas’s Taco Scene Is Booming”: Texas Monthly mentions the results of the #TortillaTournament but not that I run it, but then mentions me in a completely different section for something else!

“Andrew Do v. Sergio Contreras race for OC Board of Supervisors is about Vietnamese and Latino voters”: My latest KCRW “Orange County Line” talks about OC’s official coronavirus website, which is barely better than GeoCities.

“Ask a Tortilla Expert: Where can I get the best everyday tortilla in L.A?”: My latest tortilla columna for KCRW. KEY QUOTE: “If they last more than a week, even if handmade, that means that the makers cut them with preservatives, which means they’re ew.”

“HomeState wins KCRW and Gustavo’s Great Tortilla Tournament!”: My wrap-up of a hell of a finale, complete with the video of the event. KEY QUOTE: “How do you hold a tortilla-tasting finale at home during a pandemic, when it’s usually in public and attracts thousands of attendees? Very deliciously.”

“Column: The Corrido of ‘Amigo’ Biden: How the presidential candidate finally got his Mexican ballad”: My latest LA Times columna talks about how the Democratic presidential candidate got a corrido. KEY QUOTE: “And the way they put together “La Señal es Joe y Kamala” (“The Signal Is Joe and Kamala”) was so Los Angeles circa 2020:  Take two natives of Watts — David’s a music producer, Elvis is a political science undergrad at Columbia University.  Throw in a songwriter based in Chiapas, the southernmost state in Mexico.  Find a norteño band in Las Vegas to record the track.  Have them debut it at a nightclub in small-town Georgia.  Release it on YouTube.”

“Stealing Home Author Talk – Eric Nusbaum In Conversation With Gustavo Arellano”: In which I talk with the author of a newish book about Dodger Stadium on behalf of the Glendale Public Library.

“Jerry Brown and Jim Newton, Author of Man of Tomorrow in Conversation with Gustavo Arellano”: In which Jerry Brown scolds me for not being able to pronounce Wittgenstein right, and I compare him to a TikTok influencer for his obsession with creating content. Good times!