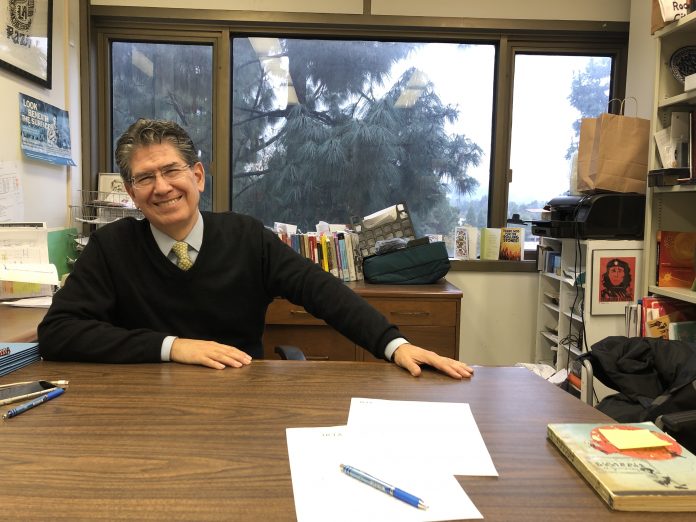 It must’ve been about 2002, maybe 2003. I was a graduate student at UCLA at the time, but more importantly, I was beginning my journalism career.

I was doing an article about representation of Latinos in the media, and a Chicano Studies professor had told me that his colleague, Otto Santa Ana, was about to release a book on the exact subject so maybe reach out to him?

I sent him an email, and Otto offered me a proof of his upcoming libro: Brown Tide Rising: Metaphors of Latinos in Contemporary American Public Discourse. It was a gracious gift, and a brilliant tome — really formed my thinking about how newspapers can demonize minorities without even thinking about it.

Flash-forward a decade. I learned that the profe was releasing a new book on the same subject: Juan in a Hundred: The Representation of Latinos on Network News.

I invited him to let me interview him about it for a monthly lecture series I used to do at the Fullerton Library. I offered no stipend, no promise of a big crowd, yet Profe took time to sit down with me in front of about 30 people for an hour.

He told me he was a fan, and invited me to speak to his class on humor—called me the Chicano Jonathan Swift, even! I would lecture to his class about my former columna about once a year for the next six years, all the way until his final class last week: He’s retiring, and I had the honor of being the final guest speaker of his career.

Nevertheless, he had gifts for ME: an etymological text, and Nestlé Quik with Zingers.

Colleges and universities are either starting or concluding their finals week right now. Instructors will spend about two weeks grading papers, then about a week of rest, and back to the grind.

Wackjobs have lambasted professors as overpaid corruptors of youth going back to Socrates. On the other extreme, the media tends to gravitate toward a couple of rock-star lecturers who become quote machines because lazy reporters don’t bother to try and find anyone else outside of whom other reporters have quoted.

In the middle are professors like Profe Otto — brilliant, hardworking people who go through an entire career largely in the shadows, known only by the thousands of students that passed through their classrooms and hundreds of colleagues in their disciplines.

I’m lucky to have dozens of friends who are professors, and am privy to their brilliant work. I try to coach them in shameless self-promotion — how to get their work out there, how to make the public at large pay attention.

Few take my advice, because they’re too darn humble. (Really, the only one who has is William Nericcio, the scabrous San Diego State Solon). So their genius never penetrates the mainstream swirl, even as it percolates through it.

Take Profe Otto. A generation of scholars absorbed his work on Latino media representation — especially in the use of derogatory language — and now teaches it to youngsters so they can think critically about the subject. Profe’s biography is great — a native of the Arizona mining town of Miami (pronounced “Miam-UH” by the natives) who was part of a small-but-extraordinary migration from there to Southern California that includes Macarthur genius winner Rueben Martinez and former congressman Esteban Torres.

How many times did my newspaper, the Los Angeles Times, mention him? Thrice — and never a full profile.

How many other professors are there like Otto? Multiple.

I’ve been lucky to have a platform where I could write about some of SoCal’s greats. I wrote about Fullerton College legend Gerry Padilla in a previous canto, penned an obituary about Cal State Northridge’s Raul Ruiz, and did long profiles of Latina history legend Vicki L. Ruiz and USC’s Jody Agius Vallejo for my previous publication.

I’ll do these stories as long as I have a platform. As I wrote in my canto about Padilla:

As local media continues its long, slow decline, we we continue to lose seemingly small stories like that of Padilla. Why should people care about a longtime Ethnic Studies professor at a community college? Because they have stories to tell. Because they have quietly changed lives for decades.

As I was writing this canto, I received in the mail the latest book by my former UCLA academic advisor, Edward Telles: Durable Ethnicity: Mexican Americans and the Ethnic Core, an extraordinary study tracking Chicanos in San Antonio and Los Angeles over 35 years. Profe Telles included a nice note saying he was proud of my career.

Hey, media: do a story on Profe Telles and all the other essential profes out there.

No question this week, because reader Elena de la Cruz has submitted the following poem, in honor of Burritos La Palma placing #15 in the Los Angeles Times 101 Best L.A. Restaurants this year — HWUT. The poem is appropriately titled “Burrito”:

Humble burrito:
Fuel for the working class,
Once mocked for its implied
social and culinary subservience,
Now among 101 stars,
in the city of stars.

If you want to submit rants, poems or other fun, email me! If it’s good enough, I’ll publish! No payment — yet…

IMAGE OF THE WEEK: Just a bit of my record collection, in honor of the homie DJ Beibi Nelso’s residency THIS SUNDAY from noon to 5 p.m. at Irenia, 400 N. Broadway, Santa Ana, (657) 245-3466. I’ll be at the bar around noon, eating lumpia and getting FADED on pandan cocktails haha!

READING: “Pendeja, You Ain’t Steinbeck: My Bronca with Fake-Ass Social Justice Literature”: The title alone, right? But author Myriam Gurba offers a master class on what a takedown should be: authoritative, ruthless, and HILARIOUS. Also, Tropics of Meta is a great publication…

LISTENING: “Coyote,” Aoife O’Donovan. I tend not to like remakes, and I find Live from Here with Chris Thile on NPR so BORING that I go to sleep to it every Sunday night because it knocks me out within minutes. But last month, they had a cover of this Joni Mitchell classic that was perfection — the voice, the bass, even the light inclusion of mandolin and piano in a song beloved for its opaque simplicity. More of this, please!

Dec. 14 aka TODAY: As mentioned above, I’ll be in conversation with Bricia Lopez of Guelaguetza fame about her family’s new cookbook Oaxaca: Home Cooking from the Heart of Mexico at 2 p.m. at Alta Baja Market, 201 E. Fourth St., SanTana, (714) 783-2252. Lecture is FREE; books, BARATO. And there will be FREE food from recipes in the cookbook.

“Tickets On Sale Now For KCRW’s LEFT, RIGHT, & CENTER LIVE! At The Broad Stage”: A plug for an upcoming appearance by me on Left, Right and Center for the presidential debates.

“5 tasty book talks for the week ahead”: The LA Times plugs my event TODAY.

“The 8 Best Food Books to Read Over the Holidays”: Vogue, of all people, plugs my Taco USA: How Mexican Food Conquered America.

“Column: Orange County was once a battleground for an epic newspaper war. Now, journalism is fading fast”: I get quoted in an LA Times story about the death of media in Orange County.

“‘Llegó Navidad’: Christmas is near, and Los Lobos is coming to town”: The truth is revealed: I helped out in the just-released Christmas album by the band from East Los Angeles!

“Shopping for Christmas Tunes with Los Lobos”: Aaaand I make a New Yorker “Talk of the Town piece,” which means I’ll never be cooler than that — and that’s okay!

“Another scandal plagues the Orange County Sheriff’s Department”: My latest KCRW “Orange County Line” commentary on a group of law enforcement officials that make the Keystone Kops look like Law and Order: SVU.