I can’t remember who first told me about Fullerton College Ethnic Studies professor Jerry Padilla. It must’ve been my sister, who took his class in the early 2000s and immediately raved about him. But rumors of a brilliant, Falstaffian older Chicano who taught students about Orange County’s Mexican history had somehow made it into my life even before then.

I didn’t meet Profe Padilla until about 2009, though. By then, my youngest brother had also taken Padilla’s course and also hyped him up. By then, multiple friends from Anaheim High who attended Fullerton College (ever the outlier, I went to Orange Coast College) had vouched for him.

But the person who made the introduction was, of all people, my father.

Padilla had read my 2008 book, Orange County: A Personal History. In it, I talked about how a group of men from my mom’s rancho of El Cargadero hung out every morning outside Jax Donuts in Anaheim, a tradition that went back to the 1970s.

Years later, Profe would tell me he thought I was lying: no way could a group of Mexican men patronize his neighborhood donut shop without his knowledge.

One day, Padilla went to Jax and announced he was looking for the father of Gustavo Arellano. My dad raised his hand.

“¿Le puede decir a su hijo que me hable?” he asked my dad.

It was the start of a beautiful friendship and my longest standing speaking gig. Every semester, ever winter and summer session from that year on, I spoke at Padilla’s class.

But that gig is ending in a couple of weeks, because Profe is retiring after nearly 46 years at Fullerton College. 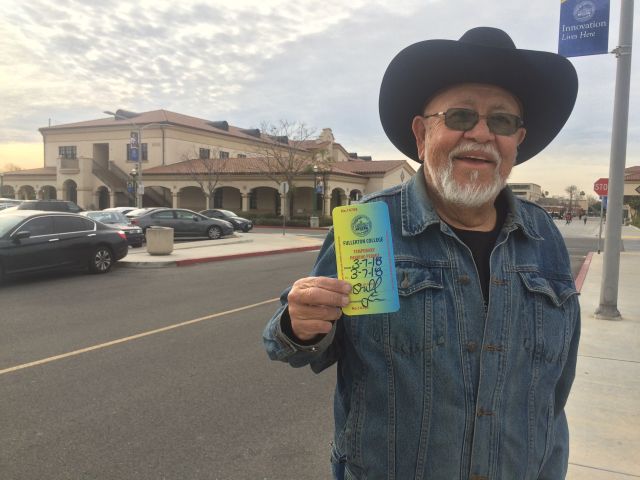 Padilla, about to give me my final parking pass. #respect the legend
First time reading this newsletter? Subscribe here for more merriment! Feedback, thoughts, commentary, rants? Send them to mexicanwithglasses@gmail.com

Gerald Padilla is like a Zelig of Orange County Chicano history. He’s a third-generation Chicano born to a World War II veteran who built his own house on Harbor Boulevard in Anaheim at a time where Mexicans still faced housing discrimination. He graduated from Anaheim High in the early 1960s, at a time where the Mexican student body population was non-existent.

Padilla then went on to university, working as a janitor at Sycamore Junior High, which I would attend in the early 1990s. He got a job at Fullerton College in 1972, and never left.

Generations of North Orange County students took one of his two trademark courses: Intro to Chicano Studies, or a course on California history. Padilla taught them about labor strikes, about segregation, but also about resistance and pride.

And he made students read my book.

It became a ritual. Before each semester or winter/summer session started, I’d get a phone call I would never answer. “Gustavo!” a raspy voice would say on the voice mail. “It’s Profe!”

It was time to visit his class again

He would leave multiple voice messages, because I simply wouldn’t respond—mostly because I loved this ritual. He’d always crack a joke, make sure to send his regards to my family, and said we would talk soon.

Every semester, I would speak to his class about the concept of assimilation as it played out in Orange County: A Personal History. Every time I visited, Padilla wore a tejana out of respect for my dad—Profe is the only man I know who can rock a Stetson and a Hawaiian shirt.

I figured it would be more of the same in February, when Profe called me again. But I grew concerned when he called even more times than usual.

I finally called him back, and Padilla gave me the bad news: he was retiring.

He’s still strong in mind and spirit, but it’s time for him to wind down. He has new grandchildren, and wants to focus on helping out kindergartners.

It was surreal when I lectured to his class earlier this spring. Padilla had asked me not to reveal his retirement then, so I had to act like this wasn’t the end of an era. As I took a student’s final question, I had to catch my throat lest I choke up. 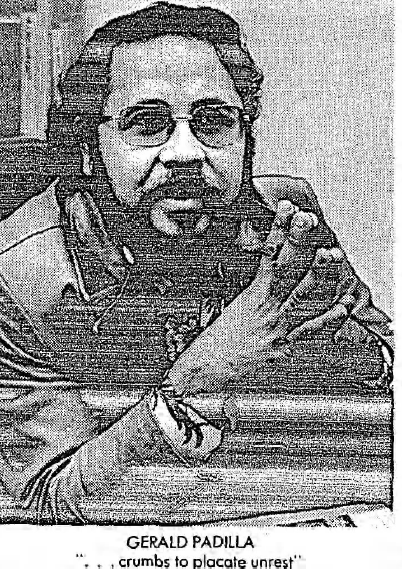 Padilla, in the 1975 Times piece. GREAT jacket, Profe!
For such a legend, no one in the local press ever bothered to ever do a full profile on Padilla.

He received prominent play in a 1975 Los Angeles Times article about ethnic studies in Orange County colleges. His quotes were pure fire: he blasted administrators for their hiring process (“They brought in incompetent people and gave them positions of power”) and weak courses (“It was just crumbs to placate student unrest”), stood up for the virtue of ethnic studies (“If you are going to get rid of Chicano history, then get rid of American history, he said. Both have already happened. One is of no more value than the other”) and blasted American history’s eternal blind spot.

“There would be no need for Black and Chicano history,” Padilla fumed then, “if American history were taught right in the beginning.”

But that was it for Padilla and the media. I once named him OC’s best community college professor, and he made occasional cameos in stories about murals and the like, but no reporter ever thought him big enough to warrant a story.

As local media continues its long, slow decline, we we continue to lose seemingly small stories like that of Padilla. Why should people care about a longtime Ethnic Studies professor at a community college? Because they have stories to tell. Because they have quietly changed lives for decades.

Postscript: I pitched Padilla’s story to multiple publications; no paper wanted it, so I decided to tell it here. There are many, MANY more stories like this in my arsenal. In the arsenal of other under-employed writers I know. Arsenals I want to unload, to tell stories that matter.

Liked my story about Padilla? Fund my next one. Or help me fund stories I can publish by others.

Remember: This newsletter is a means to the end: my own publication. I’m far, far away from that point. But journalists shouldn’t work for free, you know?

Listening: “Alexander Hamilton.” Yep, finally took the plunge—worth the $130 loge tickets at the Segerstrom Center for the Arts in Costa Mesa. Lin-Manuel Miranda is a genius, and this song might be the greatest intro of anything EVER. Funniest thing of opening night: at the “Immigrants—we get the job done!” line, the crowd barely clapped. Stay classy, Orange County!

Reading: “Mad Magazine’s clout may have faded, but its ethos matters more than ever before.” The Usual Gang of Idiots get the academic treatment.

If you open this letter Saturday morning and are in Southern California, go check me out at Pop-Up Magazine at the Ace Hotel in downtown L.A. Tickets here. And I’ll be introducing former GA’s Weekly subject Joe Donnelly THIS THURSDAY, May 17, 7pm at LibroMobile in downtown SanTana, 202 E. 4th St., Ste. 107, Santa Ana, (657) 205-9907. I’ll also sign books there. Lecture, FREE; books, BARATO.

“Gustavo Arellano: Journalism With No Apologies”: I appeared New Mexico in Focus for Albuquerque’s PBS station opposite the homie Russell Contreras, another GA’s Weekly subject.

“LAFC’s campaign to stamp out offensive chant works — at least for one match”: I was cited in a Los Angeles Times story about how the Los Angeles Football Club is trying to eradicate the stupid “Eh…puto!” chant of Mexican soccer infamy.

“How Gentefication Is Putting Small Businesses at Risk”: Quoted extensively in a PopSugar article about how Mexicans are gentrifying Mexicans. I’m liking what the writer, Natalie Rivera, is doing there…

“In L.A. Man, Legendary Alt-Weekly Journalist Joe Donnelly Looks Back at the Driving Force of His Tumultuous Career”: Quoted in a story about Joe in my former paper, OC Weekly!

“Cal State Long Beach’s 49ers have a complicated history, but it’s one worth rooting for”: My weekly California columna for the Times takes on the mascot and nickname of Long Beach St. KEY QUOTE: “But the university has a powerful opportunity to reclaim the term 49er and teach the rest of California about our complex history.”

“Irvine Voters to Decide Location of OC’s 1st Vets Cemetery”: My weekly “Orange County Line” commentary takes on the never-ending drama that is Irvine planning (and Larry Agran is back—UGH…)