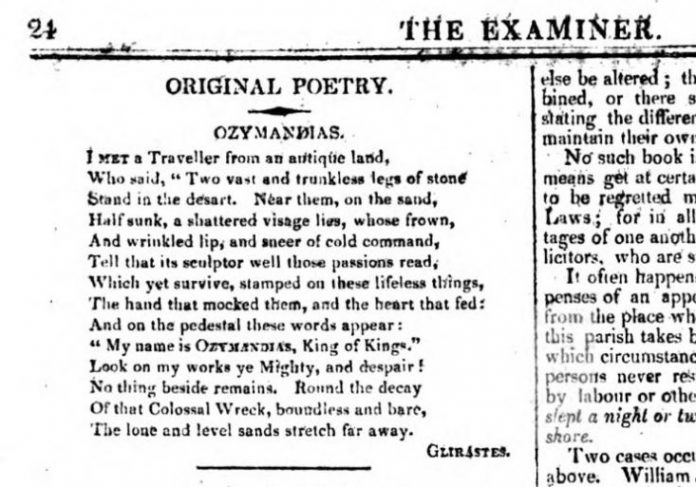 Before I began at the Los Angeles Times this past December, someone told me I was going to go into the job with a “reputation.”

They didn’t mean it in a negative sense, unlike other media companies in 2017 that said they were interested in hiring me but were ultimately scared off by my past.

(BLIND ITEM: Which Southern California media company said they wanted to hire me but were “concerned” about my swashbuckling ways, about my Twitter account, but ESPECIALLY that I was a frequent guest on The Tom Leykis Show?)

Rather, the person said that my career spoke for itself, and I wouldn’t have to prove myself to anyone at the Times — I could just stroll on in, and not worry about a thing.

My response to them was very simple and true: as far as I was concerned, I was the newest employee at the paper, so I had EVERYTHING to prove.

I know what I’m capable of. I know my talents, my weaknesses. I know my resume and career. It doesn’t matter: I take to heart the editor’s adage that a reporter is only as good as their last story.

It seems like a harsh philosophy predicated on flash instead of legacy. But I’ve never seen it that way. For me it’s just a reminder to never believe your hype. 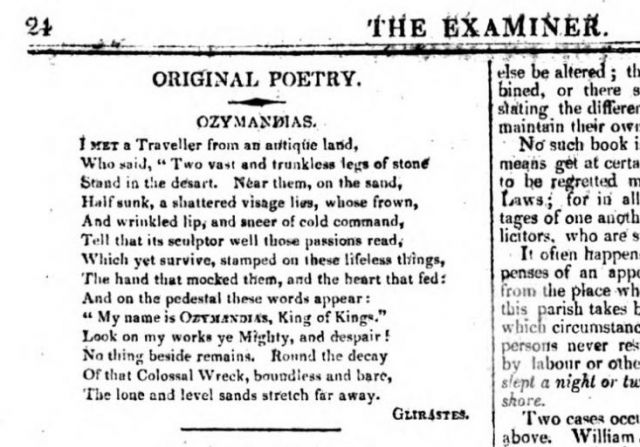 Don’t want to end up like Ol’ Ozy, you know? By Percy Bysshe Shelley. – First publication in The Examiner, No. 524, page 24., Public Domain
First time reading this newsletter? Subscribe here for more merriment! Buy me a Paypal taco here. Venmo: @gustavo-arellano-oc Feedback, thoughts, commentary, rants? Send them to mexicanwithglasses@gmail.comRight when I was about to start graduate school in 2001, I sent a beyond-earnest email to a bunch of people. In it, I bragged that I was about to go to graduate school but also tried to make sense of that moment in that pompous way only 22-year-olds are capable of pulling off.

Really, it was the the equivalent of someone posting a selfie on Instagram/FB bathroom reflected against a mirror just so people can respond with fawning responses like “stunning” or “gorgeous” or other bullshit like that.

Most of the answers I received for my email were in that vein – with one huge exception. It came from my professor at Chapman, Paul Apodaca.

Dr. Apodaca is one of the truly unappreciated intellectual giants of OC, a guy who was fighting racism against Mexicans and Native Americans back in the 1970s and truly made a difference in my intellectual development with his Socratic process.

And question my soliloquy is exactly what he did.

He shared an apocryphal anecdote set in Imperial Rome: seems a general had just returned from another glorious conquest. He strolled into the city on a chariot, under an umbrella held by a slave. The public threw flowers and hosannas at the general, who basked in the glory.

And then the slave brought him back to Earth by whispering in his ear: “Thou art mortal.”

Apodaca tore holes into my sails with his reality check — fuck, he put a cannonball to knock down my mast. And I’ve appreciated his gesture ever since.

I appreciate it when people say kind words to me — truly treasure them. And that’s why I continue to give it my all at all times. That’s why I’ve never rested on my laurels, to use another cliché of the ancient world.

Don’t believe your hype. Glory is fleeting. Focus on what you’re doing now, and what you’re going to do in the future. Because you’re really not that much, at the end of it all.

Unless you’re Moxley, of course…

JUNE 1 AKA TODAY: “OC Media in Crisis”: I’ll b speaking at Cal State Fullerton about how generally pathetic Orange County’s media is — but it’s the fault of the consumer, not the reporters. 2 p.m. at Pollak Library Room 130. Event is FREE, and so is parking — and you KNOW the latter rarely happens!

JUNE 4: “Taco USA: A Conversation Kitchen with Gustavo Arellano”: I’ll be at the Anteater Test Kitchen at UC Irvine talking about my book while ustedes gorge on a three-course meal. Event starts at 6, and is FREE — but you have to register here.

JUNE 5: “Food For Thought: Access, Affordability, Equity in the Food System in LA”: I talk food justice at a special event co-sponsored by Mother Jones and Food Tank. Will be at Dynasty Typewriter, 2511 Wilshire Blvd., Los Angeles, and starts at 7 p.m. Tickets are $25 and can be gotten here.

JUNE 6: “La Cocina: Voices from the Kitchen”: I’ll be doing a presentation as part of the amazing San Francisco nonprofit’s regular The Moth-style events. Will happen at 6 p.m. at The Women’s Brava Theater, 2781 24th St., San Francisco. Tickets are $65-$75, but include food and La Cocina’s newest cookbook.

Answer: I’ve never cared for beer, but I have some favorites. My go-to is a single bottle of Negra Modela spiked with salt and lime. I do LOVE the whimsical labels put out by Mikkeller, which my wife’s Alta Baja Market stocks, even if I don’t necessarily like their taste. I’ve enjoyed a Märzen, which apparently only appears during Oktoberfest, because it’s clear, sweet, and refreshing. And, of course, my wife’s micheladas, which are more like a boozy agua fresca than anything cerveza.

Bourbon, on the other hand, is my bae. The best deal is Evan Williams — I call it the “Prince of the Paupers” because it’s a lower-shelf bourbon that’s the secret go-to for top-rate bartenders. From there, Blanton’s for a mid-priced option, and Willett for the high-end stuff. But the best stuff is Barton 1792 Chocolate Bourbon Ball Cream Liqueur, a drink so rare you can only purchase it in the Barton distillery in Bardstown, Kentucky — TOTALLY worth the drive!

Oh, and don’t spend more than $125 for a bottle of any bourbon — after that, it ain’t worth it #yelmescal. 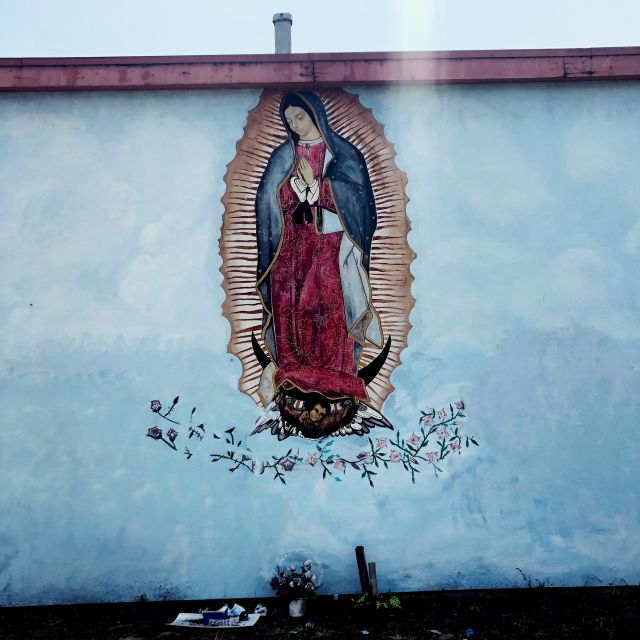 IMAGE OF THE WEEK: Virgen de Guadalupe mural at the Estrada Courts in East L.A., a ray of sunlight glimmering through…

READING: “Billionaires, Bombers, and Bellydancers: How the First Arab American Movie Star Foretold a Century of Muslim Misrepresentation”: The story is longer than it should be, but the history is great, the story fascinating, and it has a cameo by Jack Shaheen, one of the unsung heroes of fighting Hollywood stupid cultural stereotypes.

“The Sunday Long Read”: For the second time this year, one of my stories got a plug in this weekly newsletter devoted to the best in longform journalism, this time for my Eater.com essay on Chipotle.

“Put These June Food and Drink Events on Your Radar”: A plug for my speech at the La Cocina event this Thursday.