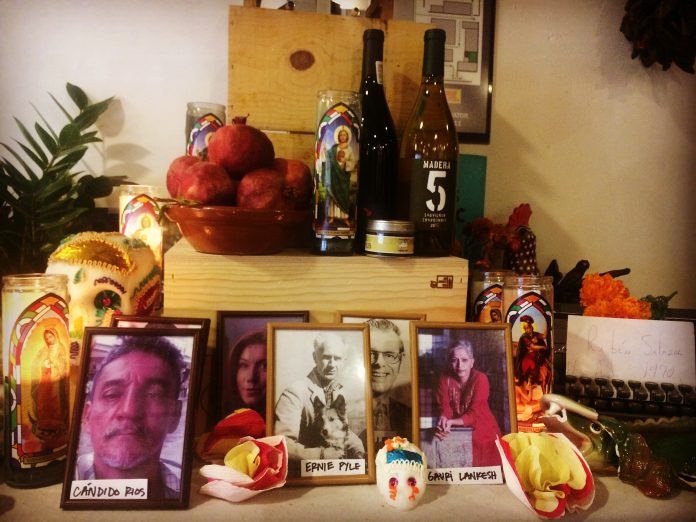 Every couple of weeks when I was editor of OC Weekly, I’d play out in my mind what I would do the day someone finally barged into my office to murder me.

I was at the very end of the building, in the 36th Chamber, so I at least had the advantage of hearing whatever mayhem might be coming my way. On my desk were weapons that would easily leave bruises—a mini-Louisville Slugger, a gun that shot rubber bands, a bona fide shilllelagh. I could fling those from far away, to distract and give the rest of my reporters time to protect themselves.

And hidden from sight was a British Empire-era bayonet, sharper than any Wüsthof, that I kept in a drawer. After I distracted the gunman, he’d go directly to me, just like I wanted it. He’d expect me to hide under my desk, so his gun would be pointed slightly downward, straight ahead.

What he wouldn’t expect was for me to be right below his eyeline, crouched right next to the doorway, as I double-fisted the bayonet right into his gut.

I gave some of my writer weapons—a club here, a Carrie Nation axe that was more blunt object than anything sharp. And always, always, ALWAYS, I’d tell to anyone who’d listen: carry a bunch of change on you. If anyone ever tried to attack you, run a couple of feet ahead of them, then fling all that change at their face, because that’ll HURT and might even break some teeth.

We would laugh about all this, even though we knew it was basically inevitable. All my writers had to deal with nasty anonymous comments; some of us dealt with actual stalkers. Death threats and lawsuits real and imagined? A weekly occurrence on the regular.

Those are the wages of being a writer who comforts the afflicted and afflicts the comfortable. I am more convinced of that than ever before, especially in the wake of the horrific murder of five newspaper folks in Maryland. 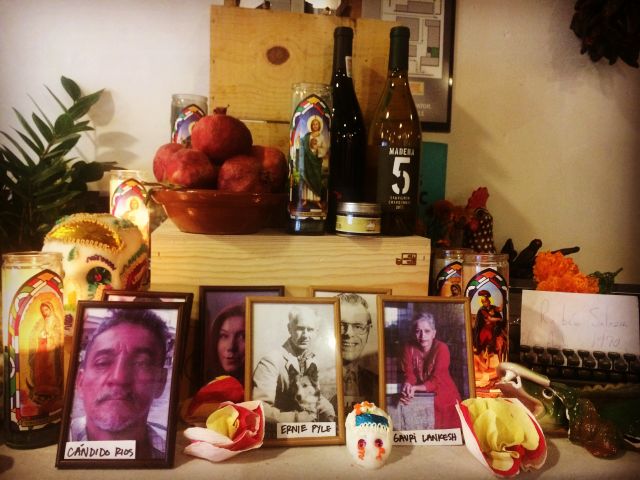 This past Thursday, I left my home knowing that a gunman had murdered five people at the Capital Gazette, but I knew nothing about any motive. I went off my phone for a couple of hours; when I returned, I had a text from a former writer of mine: “You used to tweet with the killer.”

I was on the 91 Freeway east at the time, but I asked my writer to explain. He proceeded to send me screengrabs of tweets I had exchanged with someone four years ago.

The minute I saw the avatar, I remembered the lunatic Jarrod Ramos well.

This was someone obsessed with an Orange County Register reporter for reasons I could never understand. The reporter was new to OC, so it made no sense—it’s not like they had a track record, like some of the Register’s more famous bylines. But this person was so fixated on the reporter that Ramos had a picture of him as their avatar, along with a symbol on the reporter’s forehead that I couldn’t decipher.

In recent days, it’s emerged that the symbol was a mark of death from a manga comic.

I respond to 98 percent of people who tweet at me, so I engaged with Ramos for a bit. I had to remember all of this fast history as I drove on the 91, but I did ask my intern if I had said anything truly stupid, like express a mutual hatred for the Register reporter.

I’m nothing if not predictable.

I told the full story on The Tom Leykis show this past Thursday; outside of that, and this newsletter, those will be the only remarks I have about my interaction with a killer of my peers. 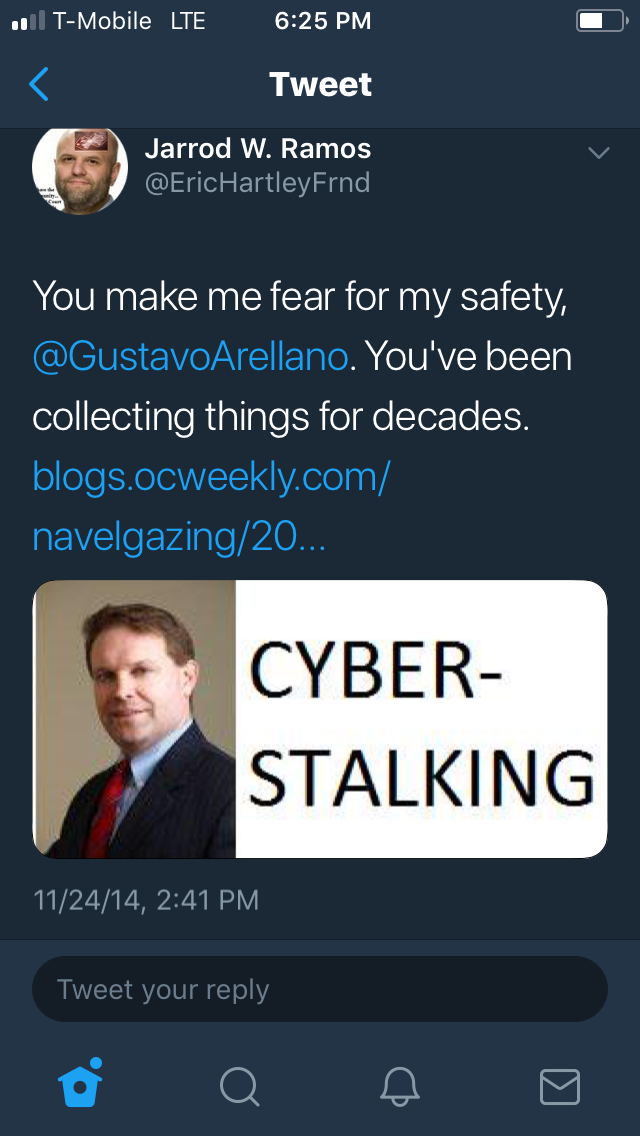 Ramos interacting with me in 2014. There’s more—much more

People want to blame the Capitol Gazette rampage on Trump, but that’s not the case here—Ramos’ death wish started back with Obama. It doesn’t help when the president labels your profession as “enemies of the people,” for sure, but the fact is that any reporter who devotes themselves to tackling the ugly of society lives with threats daily. Just ask Don Bolles. Or Ruben Salazar. Or any reporter in Mexico.

I saw on Twitter some famous reporter saying something needed to be done to stave off more murdered reporters, suggesting gun control laws or police patrols outside media headquarters. The reality is that nothing outside of writing perpetual fluff will stop people from persecuting the press.

I’ve lived with nothing but hatred thrown at me and my colleagues my entire journalism career; if daily and television reporters are now getting it at the same level the alt-weekly world always did, that just means they get to experience what we always have.

It’s not fair, but it is what it is. What are we supposed to do—stop reporting the truth? Fuck that.

So how do you protect reporters? I actually believe ALL of us should be armed in one way or another, whether pepper spray or collapsible batons or trained in martial arts. Or at the very least given pocket knives instead of key fobs (I wish I could roam around town ala Omar in The Wire, but that probably won’t happen).

But outside of turning all scribes into John Wicks, there is only one surefire way to protect reporters: love us. Send your favorite scribbler a nice note or tweet. Subscribe to their outlets. Donate to their cause. Few of us make anywhere close to a living wage–and those are the people with staff jobs. Read our stories. If the worst came to happen, make sure our bylines never get forgotten.

LISTENING: “Last of the Steam-Powered Trains, the Kinks”: The real Gs among you will know the significance of this song to me; the rest of you can enjoy a hell of a track. Songs about trains are always swell!

READING: “After 30 Years, I Found Out My Best Friend in High School’s Death Was Not an Accident”: My former colleague Anthony Pignataro writes a wrenching essay in our former infernal rag.

‘Vamos Korea’: Mexico fans shower Korea with love after the unlikeliest World Cup assist: This Washington Post article shared a tweet I did about how Mexicans and South Koreans share many things in common: a love for spicy food and a habit of randomly breaking into song and dance.

“Trump’s ‘Angel Families’ weaponize their grief to demonize immigrants”: My latest California columna for the Los Angeles Times takes on the parents of people killed by illegal immigrants who turn around and blame their loved one’s deaths not on murderers, but illegal immigration. KEY QUOTE: “Justice is not characterizing everyone without a green card as a monster here to prey on innocents.”