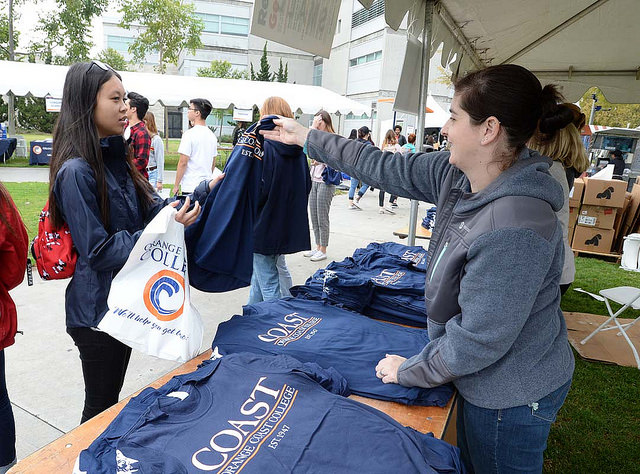 I despise nostalgia. I think it’s the refuge of juveniles, of people who think their best days are behind them and thus rely on ever-dusty memories to get them through life. Pathetic.

But I’m a hypocrite. There is one era of my life I fondly look back, and for which I make no apologies: the two years I spent at Orange Coast College in Costa Mexico back in the late 1990s.

I talk about that time at length in my barely read book, Orange County: A Personal History. But the short version is that I was an underachieving student when I enrolled and emerged the whatever-I-am I remain to this day.

Oh, the memories: making crappy comedies for Bob Lazarus (my student films are still in the attic of my parents’ Anacrime home). TV classes with a whip-smart student who ended up becoming noted artist David Michael Lee  (and who’s my friend to this day: his son and I are birthday brothers!) Me and my best friend Art spending down time at the old Tower Records at the end of the 55 Freeway.

Whenever I talk to people about my life, I always credit OCC with my success—because it’s damn true. And when I graduated, I never looked back. I figured it was the end of my time there, and it was time to move on with my life. Vaya con Diosand all that crap.

Let me clarify something. Although I hate nostalgia, I’m also a cynic—which a OCC film professor once told me was really a hopeless romantic. So in my mind, you can go home again, or at least keep that torch burning for the possibility of it.

I find a certain power on remaining with what formed you as long as possible, or at least helping to foster the furnace that forged you. It’s why I still have the same group of friends since junior high, why I stayed at my previous job until it was impossible to do so.

It’s why I plan to remain in Orange County until God calls me to my reward.

And it’s how I ended up back at OCC thanks to Bennett. He’s the executive director of the Orange Coast College Foundation, and must’ve read the part in my Orange County book where I said I’d bequeath my estate to OCC, so important the school was to me.

When he reached out to me nearly a decade ago to see if I was serious, I replied that I was—but that I had no money, and never would, but wanted to help.

We kept in contact through the years, and he’d get me to speak to faculty every once in a while about my joyful experience as an OCC student. He invited me to sit on the Greenleaf Scholarship Committee, which gives out a good amount of cash each year to deserving students.

Doug was the one who told me in 2014 that I had been nominated to join the OCC Alumni Hall of Fame. I meant it when I told that year’s graduating class that it would be the greatest honor I’d ever achieve.

And then I got a bigger one this year: I got to teach journalism at OCC.

I’ve taught at UCLA (my other alma mater), UC Irvine, Chapman (my other otheralma mater), and did a good stretch as an adjunct-at-large at Cal State Fullerton under my eternal profe jefe Alexandro Jose Gradilla. I had great students throughout, some of whom became my friends (like amazing real-estate agent Julio Arana).

Yet all of those classes and experiences combined didn’t match the joy I felt teaching this semester. It was an Intro to Journalism class, so I taught my students not just the foundation of my profession, but the pinche sand that makes the cement bind to the concrete for the beams: What’s a cliché. How to write a lead. Stephen Glass. Don’t get beat.

The students were great—smart, hard-working, nearly all blissfully unaware of who I was (many told me that their other professors said they were fans of mine, which left the students perplexed—to them, I was just their teacher who was the last professor on campus who wrote everything on white boards).

Some were just out of high school; some were just in their 40s. But they all reminded me of myself in my OCC days: ready to take on the world.

And if you’re interested in enrolling? Caveat emptor: I don’t give out many As—BOOM.

Enough ranting. This was the semana that was.

Listening: “Canto del Bracero,” Pedro Infante. One of the saddest songs I’ve ever heard—and one on my mind right now as this presidential administration takes glee in ripping apart immigrant families.

Reading: “The Malcolm X Murals of America.” Murals have always been an obsession of mine, especially disappeared ones. That Brother Malcolm is disappearing from the American landscape at a time when his words ring more prophetic than ever should trouble all.

Gustavo in the News:

“NBC News Slammed for Pushing Column calling Spanish ‘The most all-American language’”: FOX News gets TRIGGERED by me haha.

“A Blue Wave in O.C.? More Like a Slow Tide Rising”: My latest California columna for the Los Angeles Times, in which I call myself the John the Baptist of Orange County, so tell the world that all the wonderful OC lefties will one day save this infernal land–but not yet. KEY QUOTE: “Please prove me wrong, Dems. If y’all succeed, I’ll register as one of you for the first time since my early 20s. Call your prodigal son home.”

“MacArthur Fellow Greg Asbed and the Ongoing Fight in the Fields”: My latest “Good Ol’ Chico” columna for the Southern Foodways Alliance profiles one of the people behind the amazing Coalition of Immokalee Workers. KEY QUOTE: “It’s a victory for food justice in the United States, but especially for the South, because it’s the region that helped shape the CIW and Asbed. The CIW’s response to the South’s unique circumstances offers a way forward to the marginalized links in our nation’s food chain.”

“Spanish, not English, is the Most All-American Language and has Been for Centuries”: This article went far farther than I thought it would, so much so that David Duke AND Donald Trump, Jr. trashed it! KEY QUOTE: “The reality is that speaking Spanish in the United States has always been dangerous: In this age of social media, the rest of the country is just learning about what Latinos have had to deal with for generations.”

“I Spent 12 Hours in Twitter Jail”: In which I recount how me tweeting that a conservative Mexican-American who hated my NBC article had a nopal en la frentegot me suspended for 12 hours. KEY QUOTE: “But as I sat in Twitter jail, smiling that my followers were ringing the klaxon about my imprisonment, all I could think about was the political correctness police — not my haters, but Silicon Valley’s own twisted sense of PC. Because if tech companies had any real diversity, this never would have happened.”