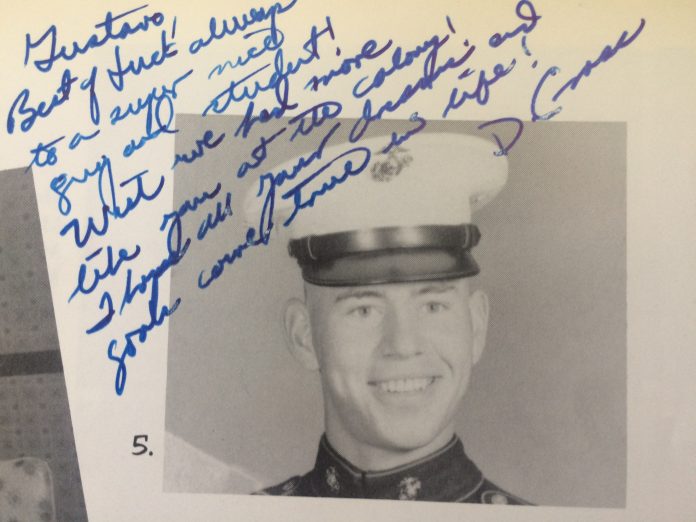 My junior year was, to put it lightly, hell. My girlfriend (who was also my second cousin, but THAT story is in my not-read book Orange County: A Personal History) messed with me, and then dumped me. Algebra 2/Trig got me an F, and my grades were trash — my GPA went down to a 2.1. I was thisclose to becoming a statistic.

And then, improbably, I rallied my senior year. It’s a rally that, insha’Allah, hasn’t stopped. And it’s because of that F — but I’m getting ahead of the story.

Mr. Elder: Biology teacher. Husband of Mrs. Elder, who was a legendary dance teacher at Anaheim High for decades until she recently retired. Mr. Elder was from Kentucky, which I always thought was cool. His airing of the HBO film …And the Band Played On cured me of my homophobia almost overnight. We’re FB friends.

And…that’s it? Kinda. I had the same English and history teachers. Like I said, junior year was a giant blur — which is weird, because I remember a lot from other years. One teacher I did have was Mrs. Spykerman, my Algebra 2/Trig teacher — but THAT story is next.

Mrs. Spykerman: Always called her Ms. Spykerman for some reason. Tough — really tough. Failed me, gave me an F, a U in effort AND a U in citizenship — so I had to take her class again for my senior year.

I tell what happened next in my not-read book Orange County: A Personal History, but let’s just say her speech to me forever changed the trajectory of my life. It’s a story I’ve told any time I’ve had a chance, including at a teacher conference at Chapman University about a decade ago attended by hundreds where I was the keynote.

As I told that story, there was a commotion in the back corner, and I stopped to see what was going on. Ms. Spykerman was in the audience. She came on stage and we hugged. Tears and standing ovation all around. Facebook friend.

Mr. Royster: Photography teacher. Skinny, laid-back, funny, great head of hair and a mustache. Introduced me to some of my favorites creatives — Cartier-Bresson, Robert Capa, Dorothea Lange, Gordon Parks. Before the pandemic, I used to run into him more often than not at good restaurants around Orange County. He looks EXACTLY the same, but now gray hair and mustache. Facebook friend.

Mr. Swanson: Yearbook and journalism teacher. The newspaper shut down after one issue because administration didn’t like what we published. Mild-mannered and kinda funny guy until he wasn’t, when he’d scream at us — no other teacher I ever had vacillated between nice and evil that much. Left at the beginning of the second semester, for reasons that were never told to us. Father of actress Kristy Swanson, with whom he was estranged — he told us so.

Mr. Wilson: Economics teacher — he was goofy and good. Was surprised to find out he was the advisor to the Christian club on campus for some reason.

Ms. Sinatra: REALLY cool English teacher for honor’s English. Turned me on to the Beats, John Steinbeck, Hamlet, A Doll’s House, and more (although I could’ve done without Tess of the D’ubervilles and Jane Austen). So cool that whenever I’d ditch Mr. Swanson’s class, I’d go to Ms. Sinatra’s regular English class because my best friend Art was in it — that’s how I got into The Catcher in the Rye.

Two years after I graduated, I visited Ms. Sinatra after school asking for her help to fight a racist school board member. She was polite, but had no interest in the subject whatsoever. That one hurt…

Have Democratic women in Orange County local politics changed the landscape of their cities?

DUH. Three of the four elected officials I have publicly shouted at as good in my life are OC Dem women. Rhonda Bolton made history in Huntington Beach, not just as its first-ever Black councilmember, but for tilting Surf City to a progressive Dem majority. Democratic Party of Orange County chair Ada Briceño is a ferocious campaigner for her candidates. And Congresswoman Katie Porter is one of the few things that’s cool about Irvine besides its food!

BTW, while the above mujeres are great, they’re not the 3 that I’ve publicly shouted out as good. Who are those? Guess!

IMAGE OF THE WEEK: My Papi, after getting boosted. Get boosted!

QUOTE OF THE WEEK: “Keep serving up your brand of menudo to cure life’s gran cruda.”

–The best thing a reader has ever said to me, after the gaba with a rose in his Twitter bio (aka alleged democratic socialist) who called me a “wage slave” just because I’m against universal basic income and for jobs that pay a fair wage haha

LISTENING:“Sorry,” Beyoncé. What did I do for my winter break? WERK, of course. But I also randomly saw Homecoming: A Film by Beyoncé, and lemme tell you: It’s one of the five coolest things that has EVER happened in human history. Opens with this song, which is a great encapsulation of the concert: HBCU drum lines/stepping/brass accentuating the great beats and lyrics that have always made me like Beyoncé more than people might know. Middle fingers UP!

READING: “No Innovations in My Time” London Review of Books with a historiography of King George III apologists that ends with one of the most brutal, yet truthful, ending lines I’ve read in a while!

SHOUTOUT TO: Neil, who kindly donated, um, more than a few tacos to sponsor FIVE full month of MailChango! “I don’t really have anything in mind. I tend to think about food insecurity, environmental justice, and animal rights. But I also know the tacos are to help foster good writing.”

About that great writing — freelancers coming this month!

“‘I’m Not Going to Agree To Disagree’: 2021’s Heavy Toll on Relationships”: A columnist shouts out a columna of mine.

“Letters to the Editor: Why might Latinos vote Republican in 2022? One word: abortion”: LA Times readers let me have it on a columna of mine.

“Best of BP: What Fernandomania Meant”: Baseball Prospectus shouts out a columna of mine.

“Accolades are long for Ahwatukee prof’s unique program”: I get shouted out in a profile about an Arizona State professor.

“L.A. Times Latino Caucus”: I get shouted out along with the rest of my colleagues in this massive thread.

It was all reruns last week fpr “The Times: Daily news from the L.A. Times,” the podcast that I host. Listen to them, and SUBSCRIBE. Don’t let me become the Poochie of podcasts!

“Grítale a Guti, Ep. Whatever”: Latest edition of my Tuesday night IG Live free-for-all brings on the DESMADRE.

“In the Green Room”: Zócalo Public Square puts me on the hot seat, and I stay true to my peripatetic self.

“Almost 30 years later, a podcast remembers when L.A. seethed — and burned”: My latest Los Angeles Times columna talks about a Slate podcast that tells the story of the L.A. riots. KEY QUOTE: “Over eight episodes, “Slow Burn: The L.A. Riots” tells as complete a story of what led up to the L.A riots as any I’ve ever heard, seen, or read.”

“We all need a pandemic-era hero in 2022. We all need my dad”: My next latest LA Times columna talks about the photo of my Papi that I have above. KEY QUOTE: “Once Papi realized radical individualism wouldn’t defeat the disease — that each of us has a part to play to combat the damned disease — he made sure to do his bit.”

You made it this far down? Gracias! Follow me on Twitter, Facebook, and Instagram while you’re down here. Don’t forget to forward this newsletter to your compadres y comadres! And, if you feel generous: Give me a Paypal taco here. Venmo: @gustavo-arellano-oc