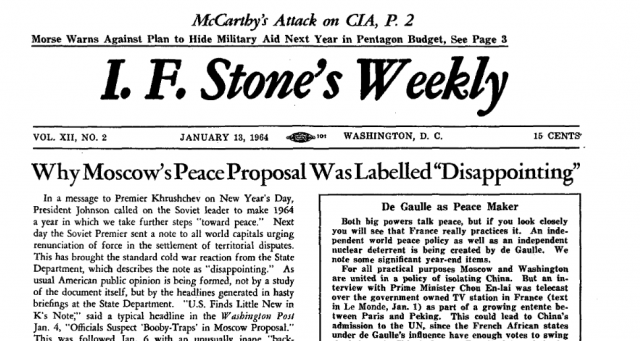 When I started this newsletter 20 weeks ago (!), I told ustedes this was a test.

It was a way for me to aggregate all the articles I do, yes. But I wanted to see how many people actually cared about me.

See, when I left my dream job back in October, many of ustedes said I should start my own publication. “I would contribute to it,” folks would say.

Well, time to put your pesos where your mouth is, locos.

My request is simple: I’m asking for all of ustedes to collectively give me $1,000 within a week.

I’m asking for this now because I hit an internal goal for newsletter subscribers (gracias to the 100-plus folks who signed up within the past 24 hours at my request to make it happen—hola, Jaime Cardenas!) that is slowly convincing me that maybe starting my own publication is feasible.

I’ll never aim for huge. As I wrote in my inaugural Canto, my model for my own thing is I.F. Stone’s Weekly, a legendary muckraking rag published and written by the eponymous reporter. It was a four-page newsletter that Stone and his wife compiled—no more, no less. But, man (and woman!), did it raise hell.

We now live in a different journalism world, of course, so any publication I would do would most likely be online (although I do reserve the write to print a four-page newsletter and sell it at my wife’s store for a buck—how cool would THAT be…)

But I gotta do baby steps.

None of that 1k will go to me. It will go to four writers, from whom I’ll commission original stories that I can publish on my recently launched website, gustavoarellano.org. Each of them will receive $250 to write a 700-1,000-word story. I will publish those four stories, one a day, and end the week with one of my own.

The articles will reflect what any Gustavo Arellano’s Weekly would be: swing somewhat Latino and Southern California, but capable of ANYTHING. Investigative pieces. Art reviews. Essays. Slideshows. Local news.

Capable of anything that conforms to my journalistic credos: Comfort the afflicted, afflict the comfortable. And don’t get beat.

Roughly 25 cents a word is not the best rate. But I can tell after half a year of freelancing: it ain’t bad compared to national online publications. And it’s goddamn generous when you consider that this will be the starting rate for Gustavo Arellano’s Weekly, run by one guy who has no full-time job and still wears Doc Marten’s he’s owned since college because he can’t afford new ones.

(Blind item: Which major arts journalism website offers $100 per story even though they’re beloved by all arts writers? Exploitative assholes)

If y’all can collectively donate $1,000 within a week, not only will I publish those four pieces, but it’ll convince me to start to prepare to make Gustavo Arellano’s Weekly a reality. That means figuring out sustainability, how to pay people a living wage—all the stuff that most people don’t realize goes into running something ethical.

Anything raised above $1,000 will go to pay the bills of my website, designed by my brilliant compa and former OC Weekly art director Dustin Ames. After that’s paid? More articles by others, of course! And I’ll get paid last, if ever.

What will you get for your donation? You get to know that your money went to freelance writers who did great stories, and that you helped a Mexican from Anacrime get closer to his goal. Sorry: I’m not Sports Illustrated to give out a phone shaped like a football…yet.

If I don’t reach $1,000 within a week? That’s cool. This newsletter will continue in perpetuity. But I’ll stop dreaming of paying other writers, creating a team.

I’ll continue on my present path: a mercenary looking for an army to lead, or a general to follow.

Enough ranting. This was the semana that was:LISTENING: “Bad Bad Leroy Brown,” Jim Croce. On Twitter, me and my followers are talking about American musicians that Mexicans love, and Croce was one of them. A life lost too soon!

READING: “A labor of love’ keeps NCAA Football video game alive”: EA Sports’ college football game was my all-time favorite sports video game. Nothing made me happier than running the wishbone against EVERYONE. I stopped playing NCAA Football once the quarterback read offense became dominant, which is just a more effective version of the run-and-shoot. FUCK THAT.

“Turlock, Modesto eateries featured in ‘wonderland’ of Central Valley Mexican food”: The Modesto Bee takes note of my Central Valley taco run (listed below in stories I did). The author mostly cut-and-paste-and-summarized my own writing—lazy, bruh.

“This foodie site did a guide to eating in California. Obviously, they talk Fresno”: The Fresno Bee does the same, to slightly better effect.

“The Anatomy of a Mexican Hamburger — Two Ways”: My beloved Westword in Denver tackles both the Mexican hamburger of Den-Mex infamy, but also the hamburgüesa of Northern Mexico fame.

“Hot time in 909 drives him to cool down in OC”: Inland Empire Daily Bulletin columnist David Allen is the most underrated columnist in Southern California, a wry scribe whose folksy ways masks a hell of a gumshoe storyteller. He tends to visit me every couple of years to use me as column fodder…and here I am!

“The Central Valley Is the Heart and Soul of California”: My latest mega-road trip for Eater finds me going from Bakersfield to Sacramento and back on Highway 99 and finding amazing Mexican food EVERYWHERE: KEY QUOTE: “But after spending three days on Highway 99, eating from Bakersfield to Sacramento and back — from taco trucks to high-end restaurants, in rest stops and swap meets, from big cities to towns with barely 3,000 people — I am now a convert. And I’ll say it: Only Los Angeles and Houston — maybe — have better Mexican food scenes than the Central Valley.”

“Where to Eat Mexican Food in California’s Central Valley, Mapped”: The above article, now in map form!

“Democrats in power always overplay their hand”: My latest California columna for the Los Angeles Times uses the state’s gas tax as key to understanding Dem hubris. KEY QUOTE: “The national GOP hopes to use public anger on the measure to drive up turnout and prevent the Dems from taking over Congress. All of this because the Democrats thought they could get away with anything.”

“Chevy’s Traverse is for Mexicans who don’t need a huge-ass Suburban but still want something sleek”: My latest car review. KEY QUOTE: “It’s so much better than some rinky dink RAV4 or whatever the hell Toyota makes nowadays (I still stick to the Mexican credo that you buy Japanese cars and American SUVs and trucks)”

You made it this far down? Gracias! Follow me on Twitter, Facebook, and Instagram while you’re down here. Buy me a Paypal taco here. Venmo: @gustavo-arellano-oc. Until next week! And don’t forget to forward this newsletter to your compadres y comadres!